Is there any correlation between the effective number of political parties and democratic participation?

I'm aware of a number of surveys in the UK and the US based around voter apathy that have shown that one of the most common reasons stated for not voting is the lack of a political party that represents one's views.

A Survation poll which surveyed non-voters in the 2010 UK General Election found (table 29) that 16.6% of voters said that one of their main reasons for not voting in the last election was that "What I believe in isn't represented by the parties/candidates", while a US Pew Research Center poll found that "Dislike of candidates or campaign issues was the most common reason for not voting in 2016", at 25%.

voting parties voter-turnout
Share
Improve this question
asked May 11, 2020 at 11:23

The answer seems to be yes, but note that it's difficult to eliminate all potential confounders in cross-country research. A fairly cited 1990 paper:

This paper examines the record of western democracies to measure the impact of differing electoral formulae on the rate of voter turnout. The record of 509 national elections in 20 countries provides the basis for a regression analysis that clearly identifies higher turnout rates in PR systems that cannot be explained by a wide variety of control variables or traditional arguments about PR. The data also reveal a marked increase in electoral turnout over the last century.

Also, the precise measure used e.g. PR system [which is a binary (institutional) variable) vs. raw number of parties also seems to matter. (The effect is reportedly weaker of even contrary for the latter in some publications.) More recent research has looked at how polarization interacts with the number of parties in affecting turnout (for OECD countries): 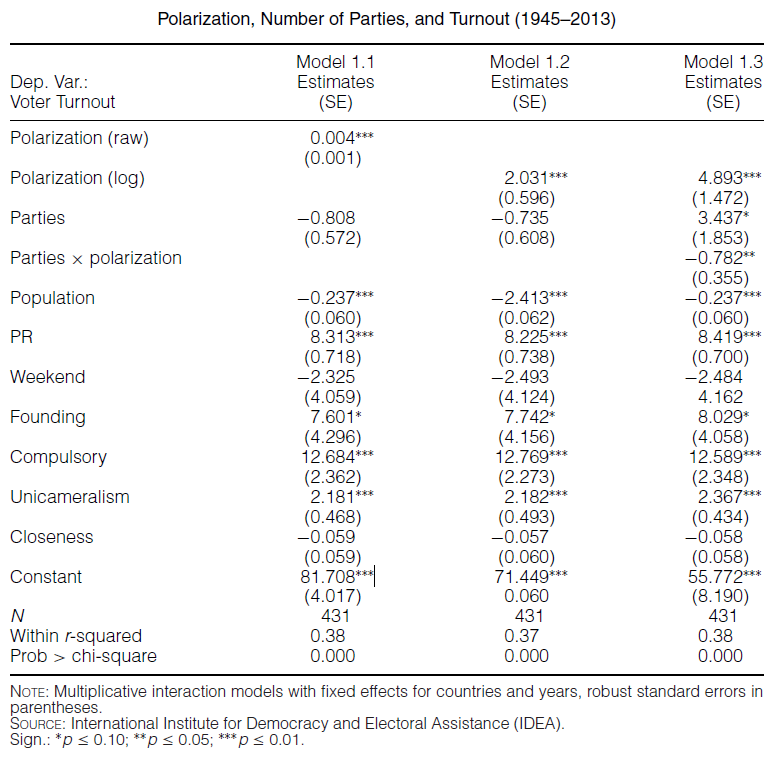 Note that without the [parties x polarization] interaction term, number of parties is insignificant in this [1.1] model, highlighting the poor explanatory power of this variable without the interaction and being broadly in line with the literature. The controls in Model 1.1 also behave as expected. The size of the population is significant and negatively associated with turnout, while institutional indicators including proportional representation, compulsory voting, and unicameralism are all significant and positively associated with turnout. [...]

If you wonder on the technical details of how the latter paper measured polarization:

For the purpose of this article, an approach similar to Jansen, Evans, and Dirk de Graaf (2012) will be utilized. The above authors’ measure of polarization was largely based on the standard deviation of party ideology scores [taken from the Comparative Manifesto Project (CMP)]. This article differs from the above in that the standard deviation will be weighted by party size in a similar fashion to Kim, Powell, and Fording (2010). [...] the use of manifesto data was chosen as it allows for comparison over a prolonged period of time and is known to generate the smallest errors when predicting party ideology placements (Gable and Huber, 2000).

Not the answer you're looking for? Browse other questions tagged voting parties voter-turnout .

10
Are there standardized ways to quantify political division?

1
Privacy of voting in India
6
Did only retired people vote in a majority for the Conservatives in the UK 2017 General Election?
47
Why does the UK have more political parties than the US?
6
Are Democratic voters more firm in their voting preferences?
1
Why do black Americans vote for third parties even less than other Americans?
4
How to split vote-based funding in the case of multi-party electoral lists?
4
What voting system are we using over on CGCC to elect chat ROs?