What are the concrete demands of Germans who want to “put an end to” (Schlussstrich ziehen) nazi commemorations?

The head of the German nationalist party Alternative für Deutschland (AFD) has demanded einen Schlussstrich unter Deutschlands Nazi-Vergangenheit, which in English translates more or less as to put an end to Germans Nazi past. I don't understand what this means in practice, but a large majority of their voters support this. For example, see Der Spiegel, Neues Deutschland, Migazin, or the New York Times. But what would this mean concretely? Do they propose to stop covering nazi crimes in history education? To move or dismantle commemoration sites? To stop prosecuting nazis (demographics will ensure the latter soon enough anyway)? Or is it just a rhetorical remark, reclaiming the moral right to call to "Make Germany Great Again" without concerning oneself with the Holocaust?

The Schlussstrichdebatte isn't something new the AFD picked up recently, it started right after WW2. Here is for example a poster by the FDP from 1949: 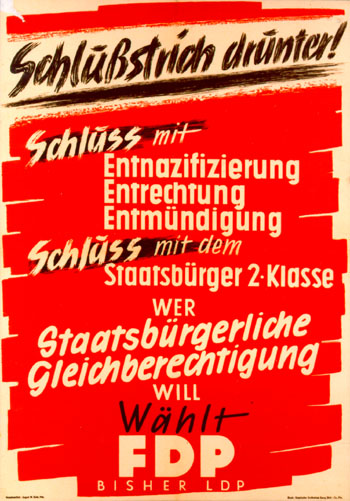 But in general, the Schlussstrichdebatte is much less about specific actionable items, and instead about the form of social debate ("gesellschaftliche Debatte") and German identity. Franz-Josef Strauß expressed this when he said he didn't 'want to hear from Auschwitz anymore' or Ernst Nolte, who didn't want to hear about the 'responsibility of the Germans' ("Schuld der Deutschen").

Regarding Erinnerungskultur, the desire is to stop focusing on German crimes and to instead commemorate those responsible for the Holocaust and put blame on those who fought against fascism (see eg Höckes comments about a "Denkmal der Schande" and a desire for a "erinnerungspolitische Wende um 180 Grad", the focus on Dresden, the accusation that the allied forces tried to take Germans collective identity, Gauland who wants to be proud of the performance of German soldiers in two world wars etc).

Not the answer you're looking for? Browse other questions tagged germany history nazism .