Why do governments negotiate with warlords?

I just saw that Egypt launched talks with the UN backed government in Libya and warlord Haftar. Why do news agencies such as Al Jazeera states "Forces loyal to Warlord Haftar attacked Tripoli", undermining the effect, instead of saying "Haftar's forces attacked Tripoli"?

Why are governments supporting warlords, if warlords are not legal? How can a warlord be invited to UN and Egypt?

A thing can only be "legal" or "not legal" in some system of law. A person cannot be illegal, but a person can do illegal things.

So Haftar isn't illegal, but Haftar might (or might not) have done things that are illegal in Libya. 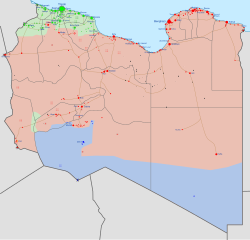 Saying "Troops loyal to Hafter" is more accurate than "Haftar's troops". Even though he is local ruler, he doesn't own the soldiers.

If you want to negotiate a peace, you have to negotiate with the people who are doing the fighting. A treaty that excludes some of the fighters will be ignored by those fighters and the war will continue.

The phrase "Forces loyal to ..." is generally used to imply an irregular military force without a true command hierarchy, and not integrated into the legal framework of a recognized sovereign nation. The fact the relationship between a leader and the forces they lead are not part of a legal framework doesn't make them illegal, it makes them extralegal (not regulated by law.)

On the other hand, the possessive form when used to describe a military force generally implies that it is part of a regular army, e.g. "Patton's army".

Not the answer you're looking for? Browse other questions tagged terminology libya .

3
Why did “third world” fall out of favor?
2
Why is the phrase “civil rights” used with such a narrow meaning in the USA?
5
What is the name of the tactic that politicians use to bury people with torrent of words?
9
What is 'post truth', and why do I hear it all the time?
1
Why hasn't legislation corrected the ambiguity of 'civil law'?
1
What might “behavioral microtargeting with psychographic messaging” mean, in the context of political action committee research?
1
US Chief Justice Roberts' choices of “in conformity with” and “in conformance with” during the swearing in at the Senate
2
Why did the life expectancy in Libya decline even before the Libyan civil war?
4
Why does France support Haftar?