What flag is similar to the American flag but has 9 stars and 13 vertical stripes?

I saw a flag walking around my neighborhood similar to an American flag but I don't recognize it. It had nine white stars in a grid on a blue background in the top left corner, the rest of the flag was taken up by thirteen red and white alternating vertical stripes. What is this?

I'd like to know what the history behind this particular rendition of the flag is, I've done some research, but I'm not sure where to start. It's possible this is a one-off that this person saw somewhere and decided to fly outside his house, but if not it'd be nice to know what he's attempting to signify with the flag.

The "vertical" strips suggest a variant on the so-called "civilian flag".

Nathaniel Hawthorne, in The Scarlet letter, describes such a flag:

From the loftiest point of its roof, during precisely three and a half hours of each forenoon, floats or droops, in breeze or calm, the banner of the republic; but with the thirteen stripes turned vertically, instead of horizontally, and thus indicating that a civil, and not a military, post of Uncle Sam's government is here established.

This is from a work of fiction, and no such flag is created in law. The idea of a "Civilian flag" is called an urban legend by Flags of the World.

I can't find any particular meaning to the 9 stars (if that observation is correct, as it is easy for stars to be hidden by a fold in the cloth).

"Civillian flags" are sometimes flown as a protest, or from the mistaken belief that only the military can fly a US flag with horizontal stripes.

As best I can tell, your neighbor is flying a modern-design flag, probably distributed by some pro-confederacy group (though I could not find any online footprint for such a flag). No historical US flag — even those proposed for the Confederacy, or any of the Confederate battle flags — has that form. But the only prominent US historical referent to the number '9' is the nine states that seceded from the union before the attack on Fort Sumter that marked the beginning of the Civil War, and the only referent for a flag with vertical stripes is that used originally by the US Treasury Department Cutter Service in the early 19th century: 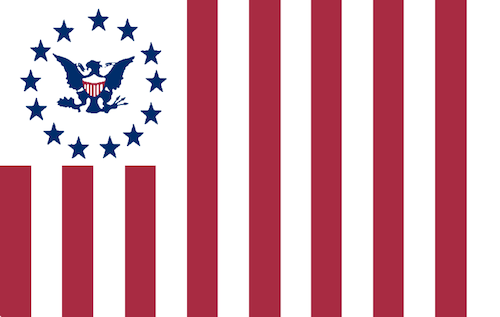 and currently by the US Coast Guard: 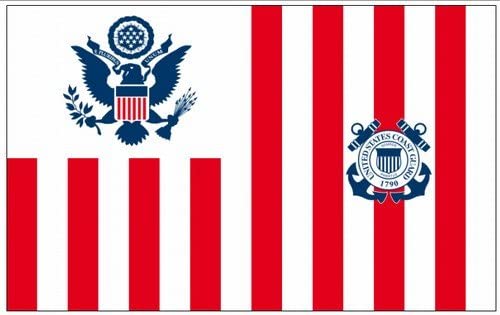 The 'cutter service'/'coast guard' flag is often misinterpreted as a civilian flag, since it was originally flown by the US Customs Service and not in any military capacity, so I can imagine some group creating a 'civilian' flag modeled on it that shows support for the Confederacy. But I suppose the only way to know for sure is to ask your neighbor about its meaning and source.

35
If Puerto Rico becomes the 51st U.S state, would the U.S flag be altered to include 51 stars?
20
What flag has a red star, in a yellow circle, in a green ring, on a red background?
7
What is this 45-star American flag?
32
What does a black-and-white Puerto Rican flag signify?
17
What does the flag of Imperial Germany symbolize today?
42
What's the red, white and blue (with stars) banner that Trump was using on the stage in his election campaign?
9
What, if anything, does a blue-and-white American flag mean?
12
How and to what extent did the US Senate block or prevent the patenting of the Confederate Flag?
3
What does this black and white middle-part variation of the communist flag stand for?