To what extent do police departments in the US reflect in numerical terms the proportions of each race in the communities they serve? 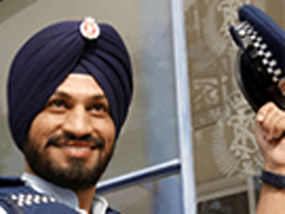 In recent years Londoners have got used to the arrival of larger numbers of black and ethnic police men and women. It has involved a change in uniform for some, such as the now many Sikh officers in their smart police turbans, serving alongside helmeted bobbies.

In 2001 the Royal Ulster Constabulary (RUC) was disbanded, its name having been for generations associated closely with the dominant section of the population in Northern Ireland. It was replaced with the PSNI (Police Service of Northern Ireland) which has recruited in a way that reflects more closely a balance between nationalist and loyalist aspirations in Northern Ireland.

However both in London and across the UK as a whole the number of black (African) police does not reflect the numbers of blacks in the community - which seems to me to be a problem. It must be important that communities be policed by people who look and think the same as them.

In the larger cities in the US I have seen many black police officers, but how do the numbers reflect the racial imbalances in places such as Minneapolis?

In Minneapolis specifically, the city's Star Tribune looked into this in 2014, comparing published statistics from the City of Minneapolis with the 2010 Census to produce the comparison below. In particular:

The department’s diversity problem falls unevenly across its ranks: while black and Hispanic officers number too few, American Indians and Asians are represented on the force in percentages that mirror the city’s population.

Part of the reason for this disparity is blamed on the rush to hire new officers leading to less of a focus on ensuring a police department reflective of the community which it serves:

The city has 1.9 officers per 1,000 residents, a ratio that puts it below St. Paul and many other Midwestern cities. The depleted force has seen response times rise while officers have reported stopping fewer suspicious vehicles and suspicious persons. Violent crime, meanwhile, has risen 4.7 percent so far this year.

Of all 85 of those potential hires — the cadets, recruits and hires with law enforcement experience — at least 60, about 71 percent, are white, according to the city figures. The number of white officers could be higher because some of the remaining 25 candidates didn’t share their race when they applied, according to the City Attorney’s office.

Unfortunately, the websites of the City of Minneapolis and of the Minneapolis Police Department appear to have blocked European IPs - otherwise, I would be able to try and find more recent statistics. 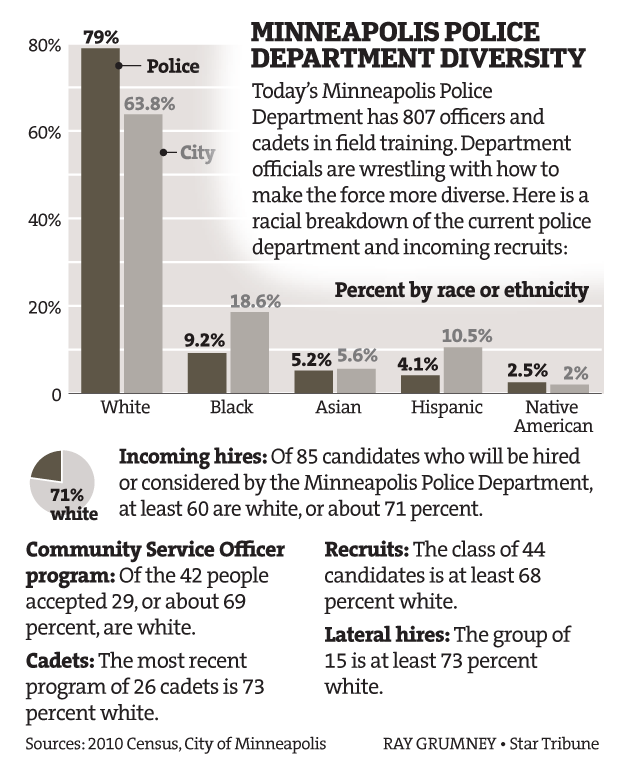 More generally throughout the US, the Washington Post has covered this in the wake of the BLM protests, finding that particularly in urban areas, police forces are "consistently much whiter than the people they serve".

As police engage with protesters in cities across the United States, many major police forces are still much whiter than the communities where they work. Decades of reform have made police less white, but it has not been enough to keep pace with the changing demographics of the country. 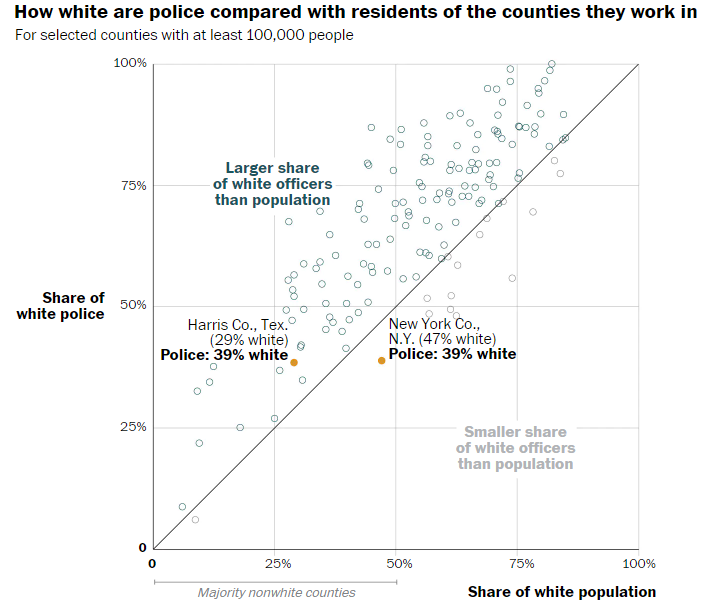 They do, however, note that in the case of Minneapolis:

Hennepin County, which includes Minneapolis, has a police force that closely matches the community, with a large share of both the population and police being white.

However, this includes the entire county, not just the Minneapolis police department specifically, which may explain the disparity.

Not the answer you're looking for? Browse other questions tagged united-states police demographics .

4
To what extent did the elections of Ilhan Omar and Rashida Tlaib reflect a “Sanders effect”?
9
What are the responses to the police assaulting journalists during the 2020 protests in the US?
18
Why do police unions support police officers that have committed gross misconduct, given that they tarnish the reputation of all officers?
3
What are the pros and cons of having police unions?
41
What could the US federal government do to reform the police?