Why is Trump's approval dropping in mid-year 2020? [closed]

Ask Question
Asked 1 year ago
Active 1 year ago
Viewed 207 times
-6
Closed. This question is off-topic. It is not currently accepting answers. 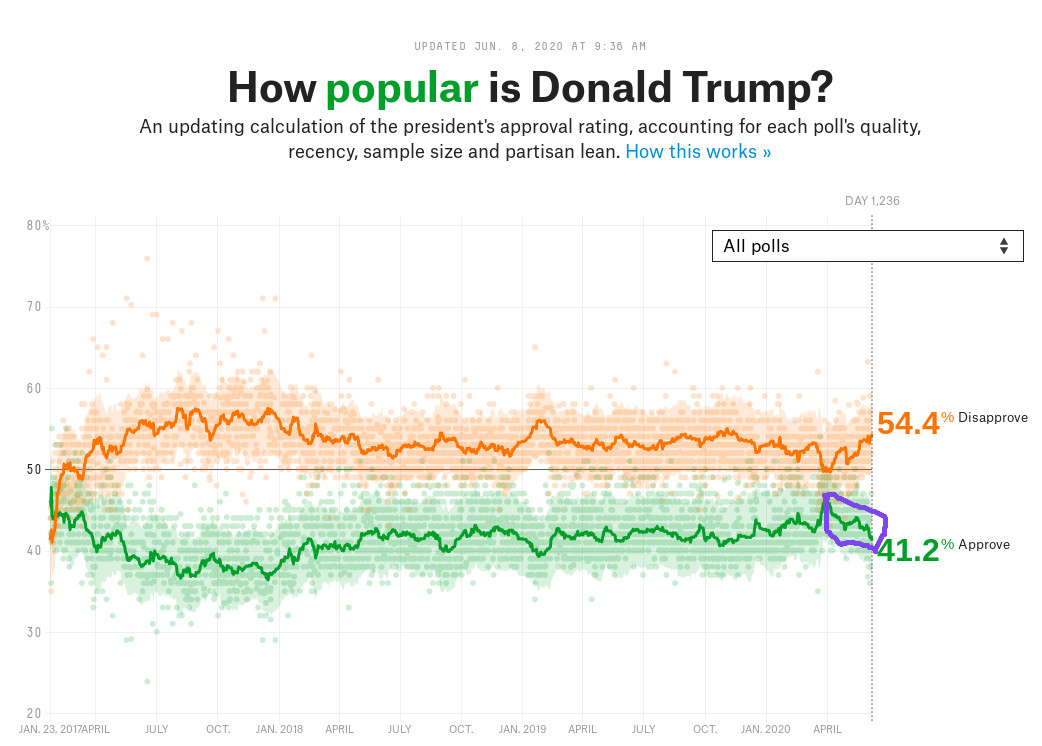 I remember that you said that I should not write about this a while back because it was a statistically insignificant event at the time. But, it continued. I asked about why the rally 'round the flag faded. I saw what I thought was a statistically significant decrease in approval from the second half of March to now. The approval of Donald Trump's job from 538 is down from about 43.5% in mid-May to about 41.2% now. Why did it drop? I am looking for a policy answer. Was it George Floyd, the Bible photo-op, or a combination of both?

It's always hard to ascribe any polling movement to a specific action or lack thereof. Polls are a lagging indicator - they can only be asked about things in the past, and they take several days to conduct, so (especially in a time with rapid news coming out) by the time someone gets asked their opinion there have usually been many events that factor into it. People are also very bad at understanding or articulating the source of their own opinions, so asking them a "Why?" question is not generally useful. Finally, there's also rarely any recent "before" polls to compare an "after" poll to, because there are too many possibilities of what might happen - for example, who would have thought to ask questions about policing in April amidst the shutdown of everything?

All that said, pollsters have some tools to get at this information. Just keep in mind that very few opinions are shaped by any one specific item in isolation.

In this particular case, this polling roundup cites two surveys which asked questions about this:

The closest you can come is to compare the dates that the polls were conducted to the news of the day. The Bible photo-op happened on June 1st, and to a rough eyeballing of the individual poll numbers from the list that drives the chart seems to indicate that the polls conducted after June 1st are notably worse for Trump than the ones before it.

Not the answer you're looking for? Browse other questions tagged united-states election donald-trump voting .

5
What does Donald Trump's temporary refugee ban mean for Australia's resettlement deal signed last year?
6
Does Trump's wall require congressional approval?
1
Why are insurers dropping out of the ACA exchange?
19
Long term, does Trump's wall cost more than it saves per year?
19
Why has Donald Trump's approval rating been rising since impeachment processes started?
5
Is the correlation between the economy and US political outcomes weakening?
31
Why did Trump's “rally 'round the flag” effect evaporate so quickly?
3
In the 2020 constitutional referendum, what factors explain the low approval in Nenets Autonomous Okrug?
10
What are the details of the Republican healthcare plan described by Trump in mid-July 2020?
4
Why has Trump's approval slowly risen starting in August?