What previous actions had been taken by Bristol city council regarding the statue of Edward Colston?

During the George Floyd protests in Bristol on June 7th, a statue of Edward Colston was pulled down and thrown into the city harbour by demonstrators. According to the BBC:

Earlier in the day, in Bristol, protesters used ropes to pull down the bronze statue of Edward Colston, a prominent 17th Century slave trader, who has been a source of controversy in the city for many years.

Colston was a member of the Royal African Company, which transported about 80,000 men, women and children from Africa to the Americas.

On his death in 1721, he bequeathed his wealth to charities and his legacy can still be seen on Bristol's streets, memorials and buildings.

After the statue was toppled, a protester was pictured with his knee on the figure's neck - reminiscent of the video showing George Floyd, the black man who died while being restrained by a Minnesota police officer.

The statue was later dragged through the streets of Bristol and thrown into the harbour. The empty plinth was used as a makeshift stage for protesters.

The PM's view is that in this country, where there is strong opinion, there is a democratic process which should be followed.

People can campaign for the removal of a statue but what happened yesterday was a criminal act and when the criminal law is broken that is unacceptable and the police will want to hold to account those responsible.

The PM absolutely understands the strength of feeling, but in this country we settle our differences democratically and if people wanted the removal of the statue there are democratic routes which can be followed.

Looking into it, it seems that there was a movement to take action regarding the statue through local government, but I'm unclear what form this took - this opinion piece seems to suggests that Bristol city council has been locked in discussion about the plaque accompanying the statue since 2018:

Now, I have plenty of sympathy for those pointing out that it’s not as easy as it sounds to achieve your aims through institutional means; that the council have failed so far to remove the statue despite repeated, passionately expressed demands, and that they have been debating the exact wording of a new plaque clarifying Colston’s slave-trading past since 2018.

This piece suggests that the council agreed to rename the statue:

Authorities had agreed to rename his statue, which was erected in 1895, to highlight his role in slavery but the process became deadlocked because of conflicting views.

Is there a timeline of actions proposed or taken by the council with regard to Colston's statue before its toppling? What caused the deadlock?

A quick partial answer which I can turn into a comment if not good enough. You asked what caused the delay.

I am a Bristolian. Some people opposed removing the statue because Colston was a benefactor to the city. There's streets, a concert hall and two schools named after him. Not an excuse for it still being there long after it should have gone to a museum, but it is the reason.

It's only in relatively recent times that his role in the slave trade has become well known among ordinary people in Bristol. The plaque does not mention it, nor is there any explainer in Colston hall. In Colston girl's school (still effectively a private school, but now taxpayer-funded), the pupils still have to bring flowers to commemorate the day of his death.

I went to school from late 1980s to early 2000s in Bristol (not there) and I studied history all the way through school and university. One of the English Lit texts we were given at secondary school was Roll of Thunder, Hear My Cry. A solid book about segregation in the US, but we were given no context to relate it to the city around us. At school we weren't taught about Colston, or about other race issues in Bristol. I remember bring taught about Rosa Parks at some point, but no one taught us about the Bristol bus boycott that happened around the same time. I only learned it as an adult. The most we ever got about black people relating to the UK was something like We used to have slaves transported from Africa to North America...[hundreds of years later, and therefore several school years later]...lots of black people moved from the Caribbean to the UK in the 50s and people were racist to them, but don't worry all sorted now. Incredible as it may sound, I'm sure there are a significant number of people in Bristol who don't know how Colston made his money, or even that Bristol was heavily involved in the slave trade.

I don't know the specific reason why the council made no progress, but Bristol City Council is notoriously sclerotic. Bristol has among the worst public services in the country, despite being one of the UK's richest cities.

Finally, Bristol has a reputation for being a progressive, hippie, boho place, and in some ways it is. If you want to see the underside of our town, have a look at the comments below the article on Bristol live (now scrubbed) , or under any Bristol live article. 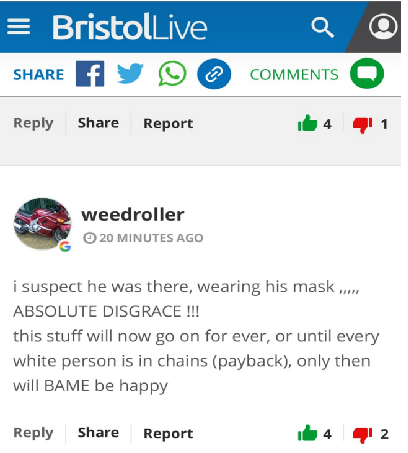 Not the answer you're looking for? Browse other questions tagged united-kingdom protests local-government monuments .

3
Do parties support the mayor/city council candidates in a Canadian city?
8
What state/country, given the right, refused to reelect any previous governor/president the most consecutive times?
6
What steps can be taken to combat unfunded state and federal pension liabilities in the U.S.?
4
What actions have the UK government taken to try to prevent another Grenfell Fire?
10
What are the limits to the power of the City Remembrancer?
27
"Government transplant" been tried? At what scale, and what were the results?
7
What would NATO's obligations have been if HMS Defender had been attacked near Crimea?