What does the Economist mean by “liberal graduates, conservative school-leavers”?

In an article in The Economist titled: Return of the paranoid style - Fake news is fooling more conservatives than liberals. Why?, the author states:

Conservatives’ complaints that elites are not on their side have become more plausible. In many countries the old left-right political divide, based on economics, has been replaced by a liberal-conservative split, based on culture. This largely pits liberal graduates against conservative school-leavers ... But when Brexiteers complain that the civil service is a nest of Remainers, or Republicans growl that America’s universities are stuffed with liberals, they are right.

What do they mean by this? Why are the liberals said to be "graduates", while conservatives are "school-leavers"? Is there evidence that "America’s universities are stuffed with liberals"?

The sentence in bold is a reasonable generalization about overall voting patterns in recent decades, in the US, UK and elsewhere. Here is data from the 2019 UK election from YouGov. Voters with a degree are almost half as likely as those with a low level of education to vote Conservative. 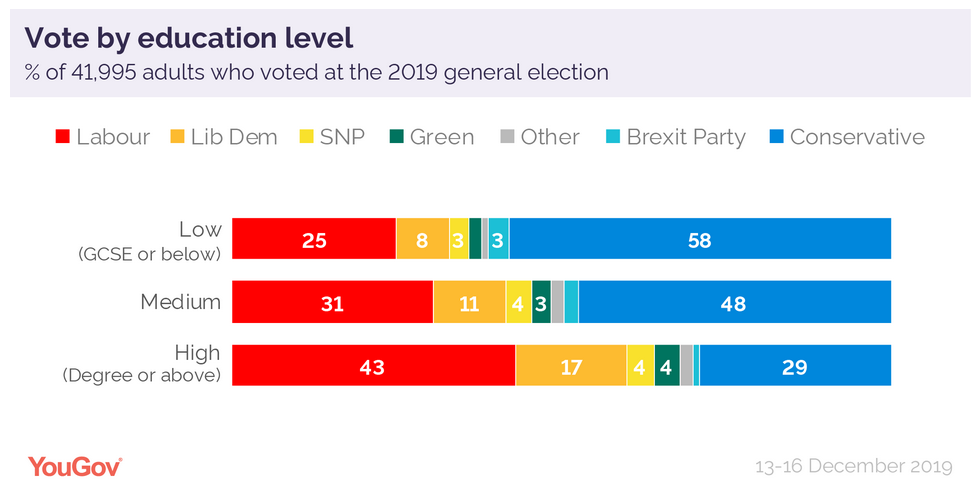 I will also note that the title of the Economist article is a clear reference to a classic essay from the 1960s, "The Paranoid Style in American Politics" by Richard Hofstadter. Hofstadter basically argued that conservatives frequently pander to anti-intellectual conspiracy theories.

I'll start with something an acquaintance told me a long time ago; it's anecdotal, but indicative. He said (paraphrasing):

People go to college in order to be employees. People who want to be the boss go to work.

This reflects a prominent attitude in conservative culture, that the proper purpose of higher education is to train people with professional skills that will increase the wage they draw when they are employed by someone else. Education does not confer ownership or property rights, and people who want to own and run a business do not need it, particularly. One can hire an accountant, a lawyer, or a management specialist if one likes; one does not need to know those skills to be a success. And becoming a success — in the social, economic, material sense of the word — is key to the conservative mindset. It is arguably why conservatives are so resistant to social change. They became successes within the rules of society as it is; critiquing, attacking, or delegitimizing the social order critiques, attacks, and delegitimizes their own success.

As a result, conservatives don't see much point in extended collegiate study. They might want to go a to a good university — because a degree from someplace like Harvard, Yale, Stanford, Johns Hopkins, UCLA, or etc is a mark of social success regardless of whether or not one learns anything — but that's about the extent of it. Relatively few conservatives set their eye on a professional career as a teaching professor, because even the highest-ranking professor is merely an employee of some university. One does not make real success (social or economic) in the halls of academia.

On the other hand, the liberal mindset lends itself to critiques of society. It is more interested in abstract ideals like justice or equity than concrete ideals like success, less inclined to accept the status quo as intrinsically good, and — among intellectuals, at least — curious about the structures, systems, and potential solutions that can only be found through research. Where conservatives follow their natural inclinations out of the university environment into the practical world, liberals follow their own inclinations into that deeply intellectual world that can only be found in higher education.

The outcome is a pronounced imbalance. We will naturally find more liberal-minded people in academic positions — particularly within those fields that conservatives think are 'useless' — just as we will naturally find more conservative-minded people among business owners and CEOs. I'm sure the same is true of the UK civil service. It's a feature of the system, not a bug. There's no way it could really be otherwise, short of a whole lot of conservatives abandoning the things they value to fill academic positions in fields they consider useless.

Not the answer you're looking for? Browse other questions tagged united-states united-kingdom education conservatism demographics .

4
Is there any study linking ignorance to political preference?

3
What public policy justifications exist for giving school boards direct authority over Charter School staffing?
6
How does DW-Nominate determine whether a specific member of congress or vote is liberal or conservative?
4
Is “liberal conservatism” a coherent political position?
31
Why are there “bad school districts” and “good school districts” in the US, assuming that the government works hard to increase education standards?
6
Why does the media workforce lean liberal or democrat
10
Is the “Our opponents hate America” meme new?
113
Why does there seem to be a lack of conservative comedy and comedy-news compared to liberal?
6
At what point does a conservative become a reactionary?
10
What does the Conservative Party expelling an MP mean?