Do the US and most EU countries effectively have a flat income tax system?

In the US and most EU countries, there is a progressive income tax system. However, income tax is not the only tax and there many other direct and indirect taxes. Almost all other taxes, such as consumption/VAT/sales taxes and payroll taxes, are considered regressive taxes that affect lower-earners more. If these taxes are all added together then the tax system is actually not as progressive as people think. In this video they show that the total tax is almost a flat tax.

I have always read that proposals to replace all taxes with a single flat income tax are considered regressive. But, doesn't it seem that we already live under a flat income tax system?

This video, and the analysis from Emmanuel Saez and Gabriel Zucman which it is based on, is the subject of great debate. The best presentation of the arguments against their interpretation of the data, in my opinion, is given in this article by Matthew Yglesias. The whole thing is worth a read, but I'll just pick out one section in particular to reproduce here:

The headline fact rests on a bunch of assumptions

Treatment of the corporate income tax is particularly important for this exercise because Congress enacted a big corporate tax cut in 2017.

Prior to that, the Saez/Zucman data shows the top 400 taxpayers paying a lower overall tax rate than the top 0.01 percent or the top 0.1 percent, but a similar rate to the rest of the top 20 percent of the income distribution and a clearly higher rate than the bottom 80 percent.

And this is important because, as first noted by libertarian economic historian Phil Magness, changing how corporate income taxes are handled makes a big difference in terms of assessing what rate the richest Americans are paying in taxes.

The solid orange line represents the tax rates estimated by Saez, Zucman, and Piketty’s scholarly article, using the assumption that the burden of the corporate income tax is spread across all non-housing capital (including small businesses and such), whereas the dotted line shows the Saez/Zucman book’s estimates based on the idea that corporate taxes are all paid by corporate shareholders. 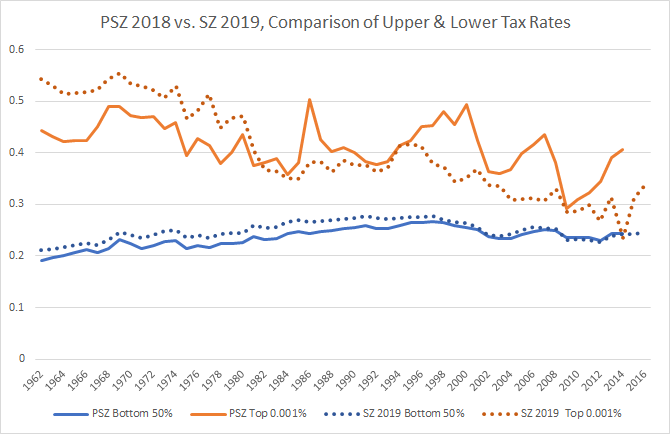 Since ownership of corporations is very highly concentrated among the richest people, if you consider a corporate tax rate cut to be a pure tax cut for owners of tax-paying corporations, then you will get the conclusion that the Trump tax cut was an incredible windfall for the top 400 taxpayers.

On the right, it’s popular to argue the exact opposite of this: that the economic burden of the corporate income tax falls largely on workers and that Trump’s tax changes are a boon to wage growth. There are well-qualified people with a whole range of views about this, though as Saez and Zucman argue in their book, it does seem telling that rich people tend to lobby loudly for corporate income tax cuts and labor unions do not (if corporate tax cuts really do help workers, unions should be the biggest champions for corporate tax cuts).

In any case, the shocking new fact presented in Leonhardt’s column — that the very richest people pay a lower tax rate than the middle class — is not just a result of policy changes but a result of changes in how Saez and Zucman think we should understand the corporate income tax, changes from their own work just a year prior.

Beyond those modeling issues, the income estimate for the top 400 taxpayers is not a direct measurement; the tax data necessary to estimate their income after Trump’s tax cuts is not yet available from the IRS. Instead, Saez and Zucman write in a technical appendix that it “is based on triangulating publicly available sources and it could be refined in future work” and they offer various hopes that more precise estimation will be possible in the future.

To pile together several controversial assumptions, pair them with an uncertain estimate relating to the wealthiest people, compile that into a striking new fact that becomes the centerpiece of a media rollout aimed simultaneously at promoting a popular book and intervening in a presidential primary campaign — all this rubs academic instincts the wrong way and helps explain a fair amount of the scholarly backlash to Saez and Zucman.

The article also shows that the many different ways of producing these figures lead to very different conclusions: they cite this work by Gerald Auten of the Treasury Department and David Splinter of Congress’s Joint Committee on Taxation: 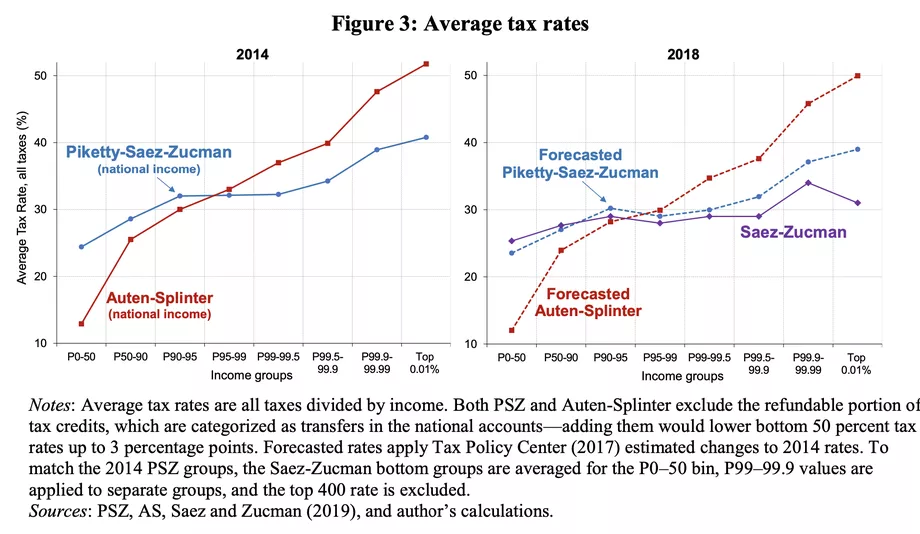 In conclusion, then, the figures & estimates presented in the video are based on significant assumptions on where the burden of payroll, sales, corporate, & even estate taxes fall, as well as a simplified view of the situation which ignores secondary economic factors, for example, the effect of increasing capital taxes. Given the disputed state of the available evidence, I don't believe currently there is sufficient evidence to confidently state whether or not we are not living under a flat income tax system.

Not the answer you're looking for? Browse other questions tagged economy taxes .

29
Has the FairTax ever been implemented anywhere on any scale?
1
Why does Tax Freedom/Cost of Government day differ so much in the United States, and how are they calculated?
23
Why not have a wealth dependent income tax?
1
Corporate income taxes in U.S only 11% of government tax revenue?
2
Progressive income taxes
22
What have been the arguments against VAT in the US?
6
Any problems with zero corporate income tax?
31
Why isn’t the tax system continuous rather than bracketed?