Did the EU PPE Scheme deliver anything?

Towards the end of April 2020, there was significant criticism of the UK government for not joining an EU wide procurement scheme for PPE equipment.

Statements from around the same time note that the EU scheme had not yet delivered any PPE. But I haven't been able to find anything about when/if the scheme did start to deliver PPE items, compared to solo British efforts.

Not as far as I can tell. Although this press release from the European Commission states "Commission bid to ensure supply of personal protective equipment for the EU proves successful", the definition of success seems to be "orders have been placed".

This European Commission webpage shows the current state of the scheme. At the time of writing, although countries have placed orders, no deliveries seem to have yet taken place. 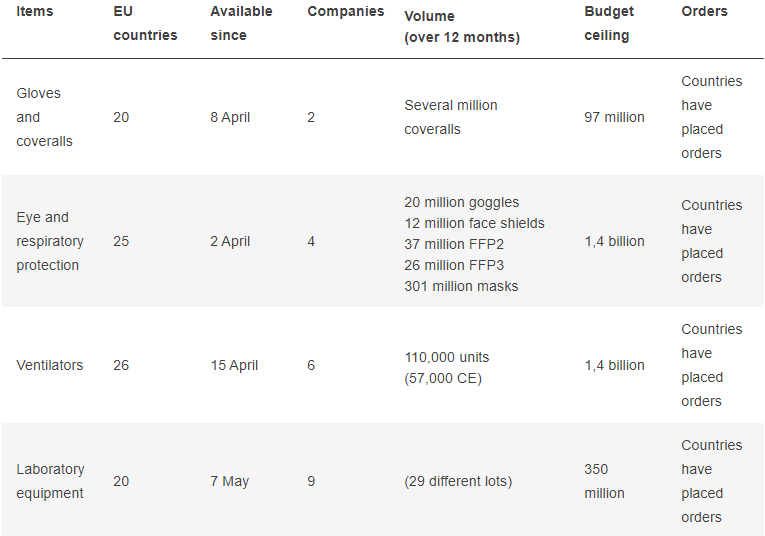 This overview of the commission's response also summarises the state of the Joint Procurement Schemes, and shows us which countries have placed orders through the scheme, but I don't think this is completely up-to-date: 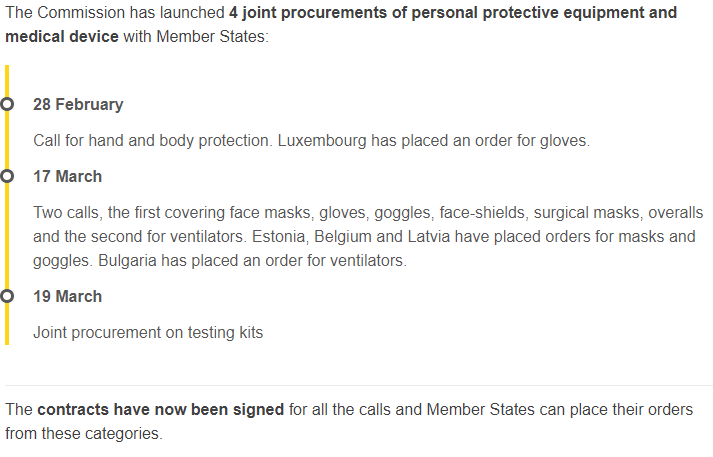 This written question of June 3rd to the Commission by Hungarian MEP Edina Tóth further lends weight to the notion that the schemes have yet to bear fruit. Although the question seems to muddle the rescEU efforts (a joint EU reserve of medical equipment) and the joint procurement schemes, it states that "In spite of the difficulties, the Member States have been able to procure what was needed; however, nothing purchased under the EU programme has yet arrived."

In the (late) response by the European Commissioner for Crisis Management, Janez Lenarčič, this muddling of the two programs continues. The response only addresses the rescEU efforts in detail, and although it acknowledges that "the Commission has launched a joint procurement mechanism for essential medical and protective equipment, which supports Member States wanting to procure medical products for their needs", it does not provide more details, nor does it refute the claim in the question that nothing purchased under the scheme has arrived.

Earlier, in May, a similar question was tabled by Slovenian MEP Romana Tomc, again questioning the lack of 'tangible results' provided by the scheme, and asking what has been obtained through it.

This earlier question is yet to receive an answer from the Commission. It is also worth noting that both questions were tabled as priority questions under Rule 138, which requires an answer within three weeks. This period expired without an answer in both cases.

Outside of these particular schemes, there have been significant intra-EU efforts to provide PPE supplies to struggling countries, however, these weren't official joint procurement schemes used to pool the negotiating power of the bloc, but rather specific orders of equipment funded by the EU itself. For example, early in the pandemic the EU provided specific support to Italy:

In March 2020, the Commission announced the EU would provide 90% of the funding to stockpile €50 million worth of medical equipment. The EU allocated all two million surgical masks, 200,000 N95 masks and 50,000 testing kits it ordered from China to Italy. In Greece, 500 mobile medical units co-financed by the EU will soon test citizens at their homes.

However, this was not part of the joint procurement scheme which the UK was invited to join. I can't find any evidence of this scheme having borne fruit, except for a tiny mention in an unsourced Daily Mail article which refers to the scheme having produced a "pathetically small quantity of the kit".

Not the answer you're looking for? Browse other questions tagged united-kingdom european-union covid-19-virus .

3
Why does UK not have a scheme for researchers from third countries?
87
Could Ecuador get Julian Assange out of the UK by giving him some mail to deliver?
1
Is there anything uniquely difficult about repealing Treaty law?
10
Would the UK have to pay anything to the EU in case of a no-deal Brexit?
3
Is the EU Settlement Scheme precluded on the passing of the Withdrawal Agreement?
12
How does the EU Emissions Trading Scheme account for increased emissions outside the EU?
8
Why is the Federal Government competing for medical supplies with the US States hit hardest by the COVID-19 Pandemic?