Are Democratic voters more firm in their voting preferences?

I am wondering whether Democrats are more firm in their voting patterns. What I mean by this is actually going out to vote. I mean only voting for the party they're registered with. (This doesn't necessarily include leaning independents but it might carry over.) According to the Kaiser Family Foundation, "A vast majority of Democratic voters (85%) and most Republican voters (70%) say they aren’t going to cast a vote for the other party’s candidate." That is a sizeable difference.

Final note: I mean firmness as in "loyalty". Loyalty means voting for candidates of that party no matter what.

I am not sure what this question is looking to answer. At any point in time, a mainstream party's nominee may not align that well with the values of a significant proportion of the party membership and non-member prospective voters.

Trump is an unusual president/candidate to say the least. He makes statements and takes positions that please many, certainly, but also are also seen as problematic by at least some within his own party. He has had pushback from a number of his party's significant figures in the past. So why should the (relative) "lack of Republican faithfulness" be surprising, given that? Plus, these are voting intention polls, well known for their relatively low predictive values, esp when it comes to controversial candidates.

For another recent example, look at Corbyn in the UK Labour party. It would seem that quite a few Labour voters refused to vote for a man who had, among other things, expressed support for Maduro's government in Venezuela. I wouldn't try to generalize anything about UK Labour voters based on that.

That says very little about how faithful/partisan those voters will be in another election, with a candidate who is less controversial with their party's usual voting pool*. Identifying such a good-for-comparison candidate is certainly opinion-based, but one can certainly make the point that neither Trump nor Corbyn have been unanimously popular choices for the individual voters who normally tend to vote Republican or Labour.

* I want to distinguish between signed-up party members and voters who tend to vote for a party.

Both parties have seen increasing partisan loyalty since the 1980s. The degree of voter loyalty to each party varies significantly with every election cycle. On average, it does not appear Democratic have been more loyal overall then Republicans. Here is the overall trend according to the article "The rise of negative partisanship and the nationalization of U.S.elections in the 21st century" by Abramowitz and Webster. The graph is based on ANES data. 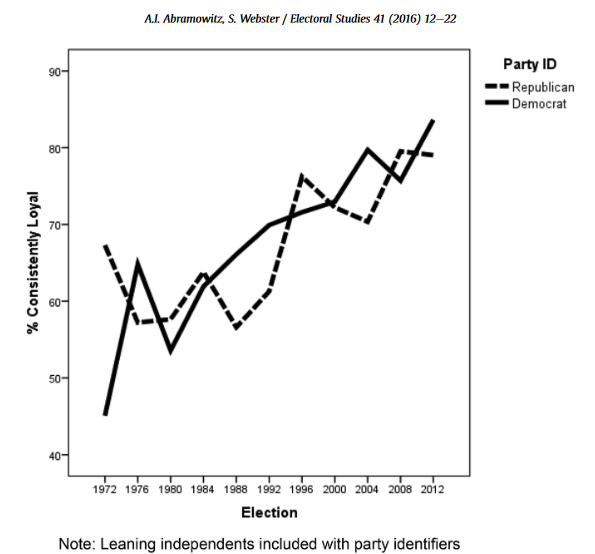 In reference to this figure the authors note:

3
Why are voting advice applications not more commonly used?
9
Do the Democratic/Republican parties have any control over their membership and primary voters
8
Why are more and more presidential candidates going by their first name?
4
Are there any benefits to random voting?
8
Why are British voters more likely to back the main parties in general elections than in European Parliament elections?
3
Are Republican voters more likely to vote a split ticket than Democratic voters?
3
Are moderate voters less reliable than nonmoderate voters?
3
Is ticket splitting correlated with low information?