I am curious about the bipartisan divide in this country. But there is an additional segment that Gallup says makes up about 36 percent of people: moderates. Is this segment less civically engaged because of not having strong political leaning like liberals and conservatives do, albeit in opposite directions? Does that engagement translate to being overrepresented at the ballot box in the same way old people are?

By the way, I'm talking about those who describe themselves as moderate not necessarily independent. I want to know about their voting rate compared to more ideologically inclined citizens.

According to Pew Research Center analysis from 2012, a plurality of non-voters (38%) self-described as moderates, compared to 25% who identified as Liberal, and 28% as Conservative. In addition, 44% identified as Independents. 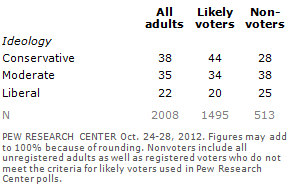 In addition, this more recent Kaiser Family Foundation report from 2019 found that the majority (56%) of swing voters self-identify as moderate, compared to 16% as Liberal, and 26% as Conservative. It also notes in its key findings, that of these swing voters, nearly a quarter didn't vote in '16 or '18, and are 'less engaged on national politics', so we can possibly extrapolate from this that self-identifying moderates are less likely to vote or be civically engaged than those identifying as either Liberal or Conservative. 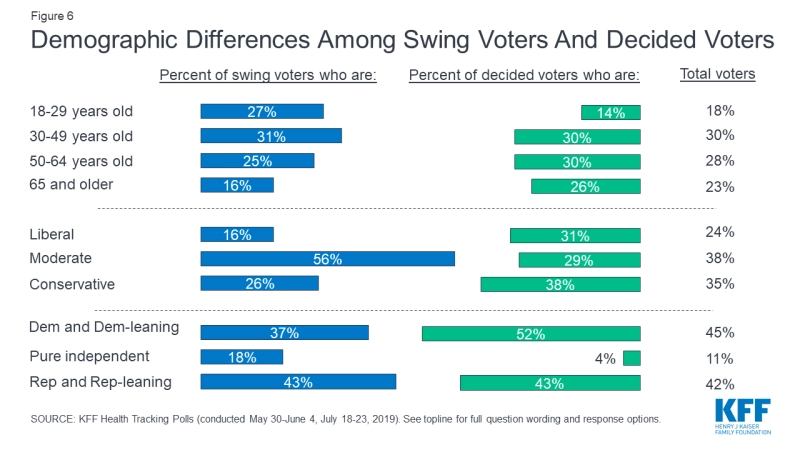 Not the answer you're looking for? Browse other questions tagged united-states voting ideology .

4
Why is Trump spending less than Hillary Clinton?
0
What are the benefits of foreign aid for voters?
7
Are US politicians allowed to give money to voters?
2
Are caucuses less democratic than primaries?
8
Why are British voters more likely to back the main parties in general elections than in European Parliament elections?
6
Are Democratic voters more firm in their voting preferences?
5
Are Americans with strong ideological views less likely to be independent?
1
What percentage of voters lived in a precinct where Republican house candidate got less than 5% of the vote in 2016 and 2018?