Have any polls surveyed the opinion of Brexit supporters on the recent decision on Hong Kong BN(O) passport holders?

On July 1st, the UK Foreign Secretary, Dominic Raab, & Home Secretary, Priti Patel, announced that a 'path to full British citizenship' would be opened to Hong Kong British National (Overseas) passport holders, which could affect over three million people, according to the Evening Standard.

Following the announcement by the Chinese Government that it will impose a national security law on Hong Kong, the UK has confirmed that new arrangements will be put in place for British Nationals (Overseas).

The UK Government made a commitment to change the rules for BN(O)s should China implement the new national security law first proposed in early June.

This new bespoke immigration route will allow BN(O)s to come to the UK without the current 6 month limit, granting them five years limited leave to remain, with the ability to live and work in the UK.

After these five years, they will be able to apply for settled status and, after a further 12 months with that status, apply for citizenship.

The new bespoke route for BN(O)s will be implemented in the coming months, with exact date and further details to be announced in due course. In the meantime, we will ensure British National (Overseas) citizens who wish to come to the UK will be able to do so, subject to standard immigration checks.

This follows an article published on June 3rd by Boris Johnson in the South China Morning Post which warned of this decision:

If China imposes its national security law, the British government will change our immigration rules and allow any holder of these passports from Hong Kong to come to the UK for a renewable period of 12 months and be given further immigration rights, including the right to work, which could place them on a route to citizenship.

Immigration was a big issue in the debate surrounding the Brexit referendum in 2016, as well as the subsequent two General Elections. I'm interested in what the view of Brexit supporters is on this decision. I would have expected Brexit supporters to not support this measure, however, anecdotally, I've been surprised at the support for this proposal among those I know personally.

Have any polls been conducted surveying the support for this proposal or decision that splits out responses by 2016 Brexit referendum vote? I'm aware that there are unlikely to be polls on the actual decision this soon after the announcement, but seeing as the issue has been talked about for about a month, I hope that some research has taken place. 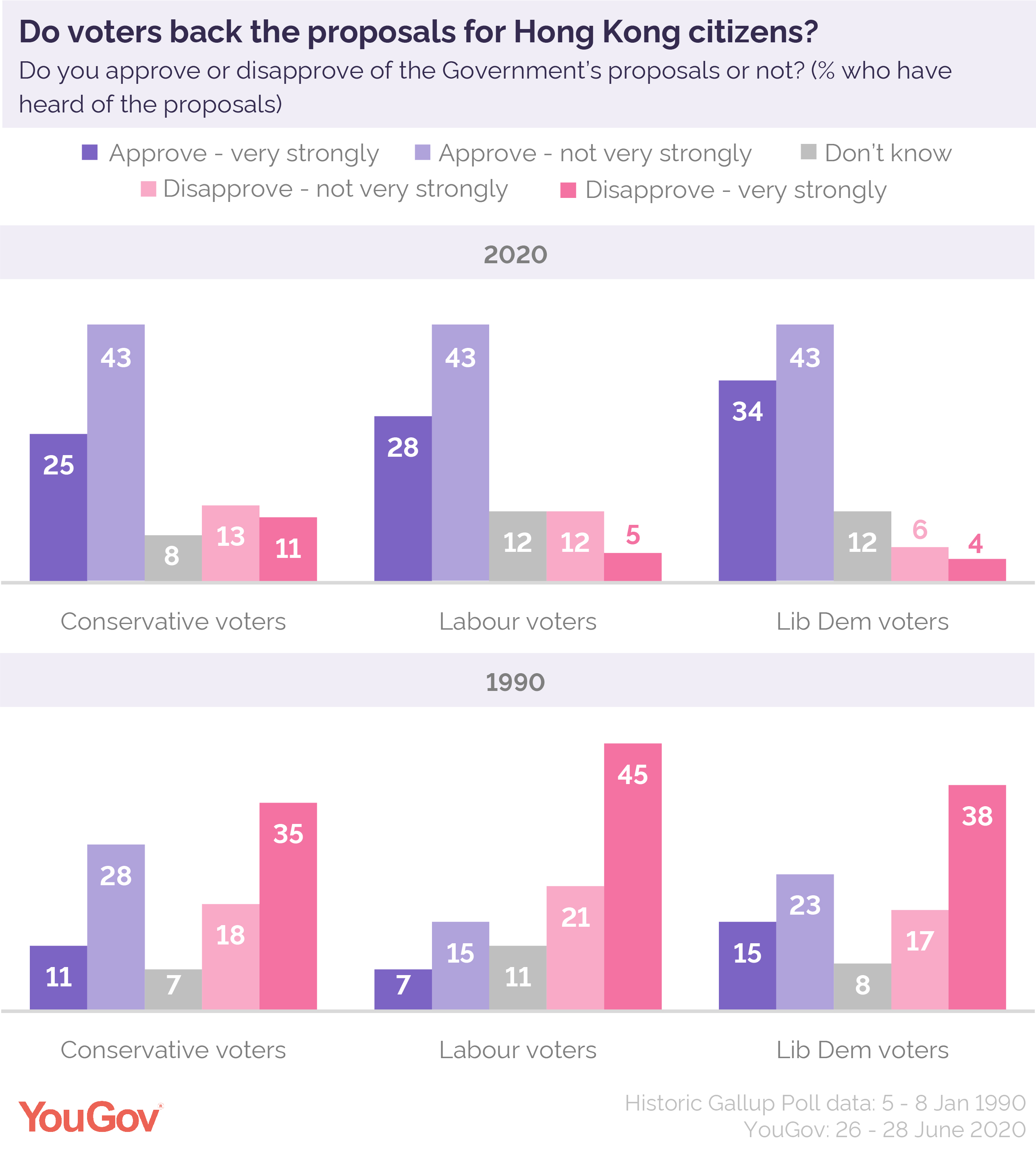 The full results show that the level of support among Leavers (62%) is nearly as high as that among Stayers (70%).

If that seems surprising it may be relevant that a study published last year found the following:

Those who subscribe strongly to the Leave identity, measured by their aversion to the EU and antipathy towards immigration, are also more likely to hold negative perceptions of Chinese global leadership and be more suspicious of China as a military threat.

In addition to Brian Z's answer, I found an older and less detailed poll, again run by YouGov, conducted on May 29th: 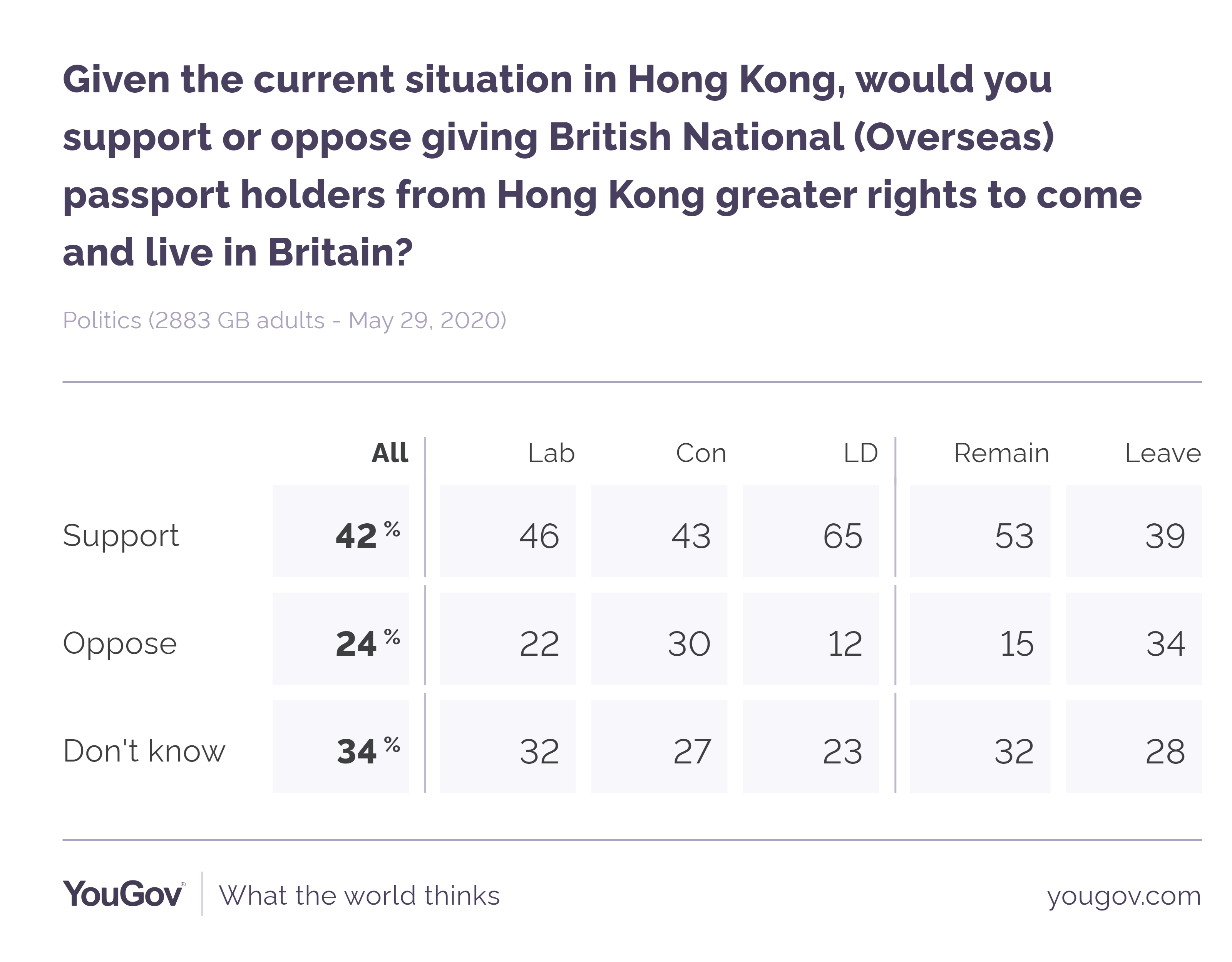 This shows a rather large difference between the levels of support shown by Remainers & Leavers, but also a substantial amount of 'Don't know' responses compared to the survey in Brian's answer, suggesting opinions have changed somewhat over the last month as more information has become available, and perhaps, the situation in China & Hong Kong has developed.

a.They should be given total rights to come and live and settle here

b.The current arrangements should apply, but citizens of Hong Kong should be given preference/fast-tracked

c. The existing arrangements should apply, with the same rights as commonwealth citizens

I don't know when the results will be in but I'll try to find out.

Not the answer you're looking for? Browse other questions tagged united-kingdom brexit immigration public-opinion hong-kong .

10
What did Taiwan's president Tsai Ing-wen actually say that it would do for "Hong Kongers"?
12
Why would a grant of British citizenship to Hong Kongers be a treaty violation?
4
What is China's objection to Australia's planned offer to HK residents?
6
Why did China impose the new national security law on Hong Kong now?
60
Can I (a random person in the world) be prosecuted under the new Hong Kong security law?