Has the Democratic Party expressed support for the removal of the Lincoln Emancipation statue?

The designers of the Emancipation Statue in Lincoln Park in DC didn’t take into account the views of African Americans. It shows. Blacks too fought to end enslavement. That’s why I’m introducing a bill to move this statue to a museum. 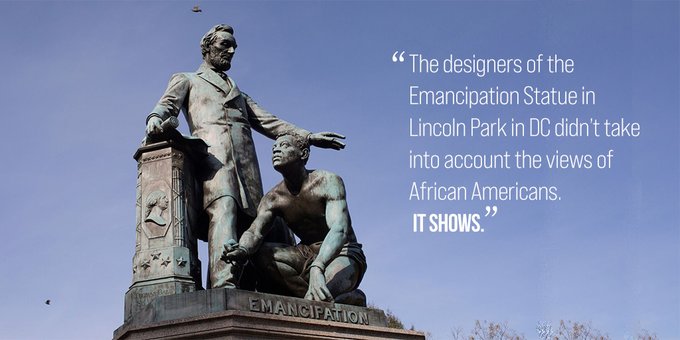 Not everyone agrees with her assessment. Despite this, she has introduced a bill to have it removed

Del. Eleanor Holmes Norton (D), Washington, D.C.’s nonvoting representative in the House, is introducing a bill to remove the Emancipation Statue from the city's Lincoln Park.

Is there any indication that the broader Democratic Party agrees with this and would like to see it removed?

It would be an overstatement to say with any kind of certainty that "the broader Democratic Party agrees", whether you are asking about elected officials or the base, nationally or locally. There can be no certain answer, as I'm seeing no relevant public opinion poll, and no specific bill that has been voted on.

However, what we do know is that Norton is not entirely alone, but opinion on this is mixed at best. Here is a relevant article which includes the following:

“The meaning is degrading,” said Marcus Goodwin, a candidate for the District of Columbia Council. “To see my ancestors at the feet of Lincoln — it’s not imagery that inspires African-Americans to see themselves as equal in this society.”

Mr. Goodwin has led calls for the memorial, also known as the Freedman’s Memorial, to be taken down through a legal process, including a petition that prompted Representative Eleanor Holmes Norton, Democrat of the District of Columbia, to announce she will introduce legislation before the House of Representatives to remove the memorial.

Most of the other people quoted in this article are not supportive. As I write this, the petition is currently approaching 7,000 signatures which is modest but not insignificant, especially if we consider that this is primarily an issue of interest to local residents.

As a final note, I will mention that a very similar statue in Boston will be removed. The relevant commission voted unanimously to do so. Another in Madison, WI has also seen some controversy, but as it does not depict a black man on his knees, there may be less support for removing it.

Not the answer you're looking for? Browse other questions tagged united-states democratic-party monuments .

44
Why are some against the removal of a statue of Robert E. Lee?
2
Who initiated the removal of the Robert E. Lee statue in Charlottesville?
0
Has the White House expressed willingness to revisit the Friday DACA deal?
20
How come there are so many candidates for the 2020 Democratic party presidential nomination?
30
Why is gun control associated with the socially liberal Democratic party?
0
What's the deadline for Democratic party primaries candidates for meeting the new debate criteria?
4
How did the Democratic Party control the House so continually from 1956 to 1996?
30
Has Biden's campaign, or the Democratic Party, publicly voiced their opinion on granting some sort of immunity to Trump?