Do Democrats in general not perform better than Republicans in handling US economy?

In recent US general election polls, I found that despite that Republicans (Trump specifically) are behind in almost all aspects, they are always leading in being trusted in handling US economy over Democrats (Biden specifically).

But I also saw articles in liberal media claiming Trump administration didn't actually make economy better, and every Democratic administration saved the country from the economic mess created by the previous Republican's.

I can't reconcile the contradiction between the polling and the history. Is it true that Democrats don't perform better than Republicans in handling national economy, which leads to less faith in a possible Biden administration? What about their policies and ideologies cause the difference? Is it that Republicans are for more capitalistic and free markets and less government interventions?

There is limited data and a lot of confounding factors.

However, a simple measure of GDP has the economy growing faster under Democrat than under Republican presidents. The following image from jec.senate.gov (a partisan source) shows this: 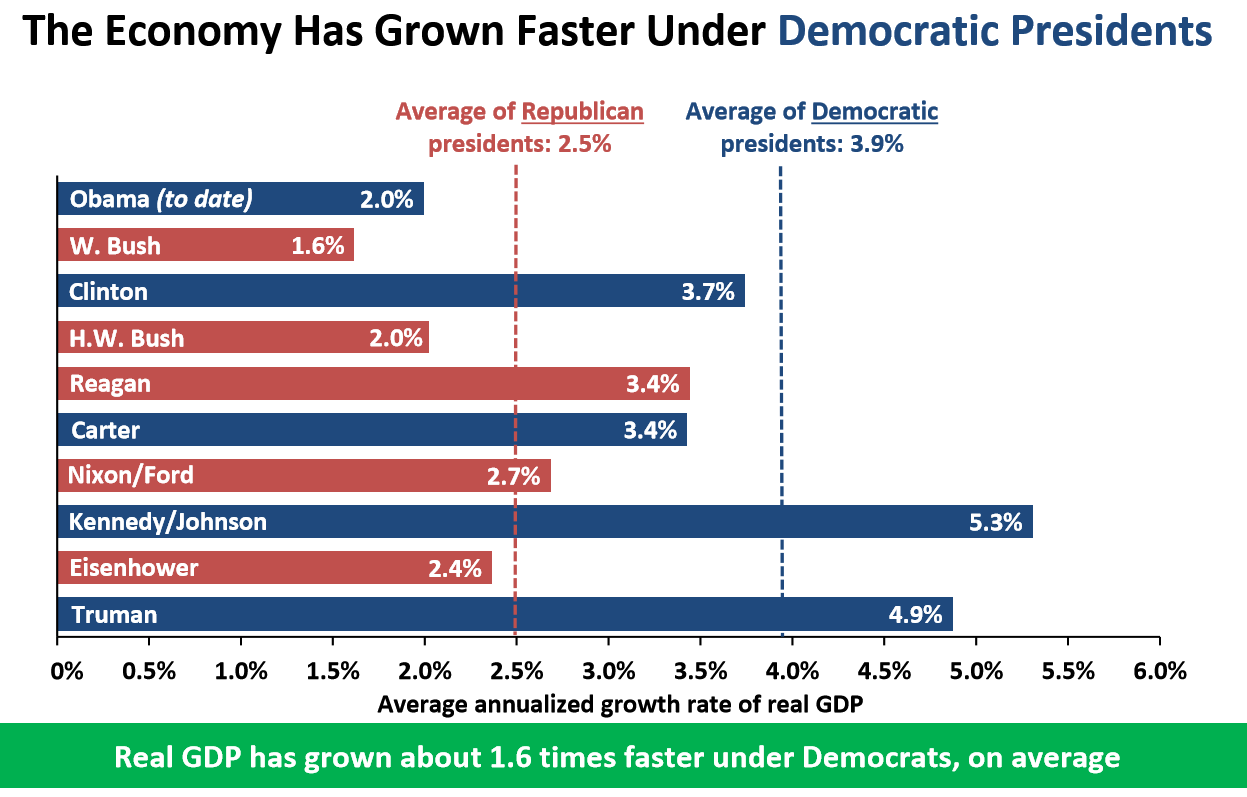 Now any particular Presidency can point to reasons for the growth or lack of growth which had little to do with the President:

Truman enjoyed the post-war boom as the economy bounced back, Eisenhower took the subsequent bust.

Carter and Regan tied. There was a housing crash under Bush Sr, but Clinton had a dot-com boom Bush Jr had high oil prices from gulf wars, and the financial crisis. Obama had the Economy as it emerged from the Financial crisis....

. Every President is a special case and most of the reasons for growth are not in the control of the president. The difference may be ascribed to "blends of good policy and good luck”. However the difference between the parties is statistically significant, but given the confounding factors, may not be predictive; that is we can't confidently say that "if the next President is a Democrat, we expect economic growth to be 1.6% greater than if they are a Republican.

First, when we talk about Republicans and Democrats, we have to be aware that the nature of the Republican and Democratic parties has shifted over time. The modern versions of the parties began taking on their character somewhere in the Johnson/Nixon era, and only fully crystalized into their current forms near the beginning of the Reagan era. There is reason to believe they are shifting again under the pressures of Trumpism, but that likely won't be clear for another decade, so we'll set that aside.

Within this time frame — say the late '60s onward — the Republican party has generally taken an economically and socially laissez faire, overtly Christian, and strongly militaristic posture towards governance. They have strong associations with heavy industry and agriculture: automakers; durable goods; farmers and ranchers; coal, oil, and natural gas production; etc. The Democrats, by contrast, have mostly positioned themselves on civil rights and social justice, social safety nets and unions, and the academic world. They have leaned more into high tech, entertainment, research, and a burgeoning service sector then on the older sectors. On these grounds alone, Democratic administrations have uniformly tended to outperform Republican administrations economically, not specifically because of any aspects of their policies, but because GOP administrations have been obliged to shore-up aging industrial capacities by reducing regulations to make them more competitive in a world market, while Dem administrations merely needed to give new, highly competitive tech and service companies a good environment to grow. The Democrats ended up tied to a stronger economic horse, and both Clinton's and Obama's economic successes trace back to that.

Further, while GOP administrations were trying to cut back taxes and regulations to spur economic growth in their aging sectors, they were also committed to projecting military power. Reagan had the advantage of the Cold War, which allowed for heavy military investment — a wonderful stimulus to heavy industry — without the cost and destructiveness of committing troops and ordinance to actual battle. With the fall of the Soviet Union beginning in 89, however, the only way to maintain that industrial investment was hot war, with America taking on (as HW Bush put it) a 'global police' role, intervening in conflicts around the world. Every president since — until Trump — has adopted that role to one extent or another. But both GOP administrations followed a forceful, 'boots on the ground', intervention and occupation model, while the two Democratic administrations preferred a limited support and assistance model (softening hard targets, securing significant areas, establishing air support, but leaving main combat to local forces). GOP military actions — while intrinsically better 'spectacle' for the viewing public — constituted far more significant drains on the US economy than the equivalent Democratic actions. Neither of the Bush's laissez faire economic policies could support the kind of war they wanted to pursue, nor provide sufficient stimulus to the decrepit industries they were trying to foster.

That being said, the GOP has a more appealing and accessible ideology with respect to economic policy. The GOP toes a simple line: individual freedom, personal success, limited government intervention, the 'trickle-down' concept which asserts that the more revenue generated the more income will be distributed through the population. Democratic economic policy is always a more complicated and disquieting structure, involving guarantees against systematic biases, protections for the social and natural environment, limitations on personal freedoms where personal freedoms have long-term negative impacts, and other attributes that make many people uncomfortable. On paper GOP polices look enticing; in practice they tend to be confused and self-defeating. But many evaluate policies solely in their on paper aspect, without really grasping the in practice difficulties that will arise. It's worth noting, in this context, how much political ground W Bush lost when he went back on his 'no new taxes' campaign promise, despite the fact that raising taxes was essential to continue his military and economic policies.

It's difficult to work the Trump administration into this analysis, both because (as mentioned above) Trumpism seems like a polarity shift in US politics which cannot be evaluated except in retrospect, and because of the the unforeseeable impact of COVID-19 (and the Trump administration's unforeseeably erratic responses to it). As with so many other things, the Trump experience throws rational analysis into a blender. Time will tell, though...

Not the answer you're looking for? Browse other questions tagged united-states economy republican-party democratic-party .