Who are China's allies?

The US has NATO/EU and other South/East/South-East Asian countries as its direct allies either by ideology or by pacts. Also, most US allies are either high-income countries or technologically/militarily advanced.

In contrast, I don't see many countries that are close to China and/or able to reciprocate economically or militarily.

Edit: Some people would point out countries that are participating in the Belt and Road initiative. Most of them are poor. Aren't they?

The Confucius Institute is a major educational initiative, and just one well-known example of how China has been making a "Big Bet on Soft Power" according to the Center on Foreign Relations. China enjoys favorable public opinion in many countries. In Russia and Nigeria public approval of China is over 70% as of 2019, and these are two major examples of China's allies.

The US has... South-East Asian countries as its direct allies either by ideology or by pact.

This in particular may be changing. As discussed in a Brookings Institution report, the primary loyalty of ASEAN (the main group representing Southeast Asian countries) is shifting increasingly towards China. ASEAN is already a larger trading partner for China than the US, a significant change in the longer term pattern.

Because many developed countries like the U.S. condemn China's new Security Law in Hong Kong, the 53 countries supporting China's crackdown on Hong Kong are outwardly China's allies. I colored in US even though Axio didn't. 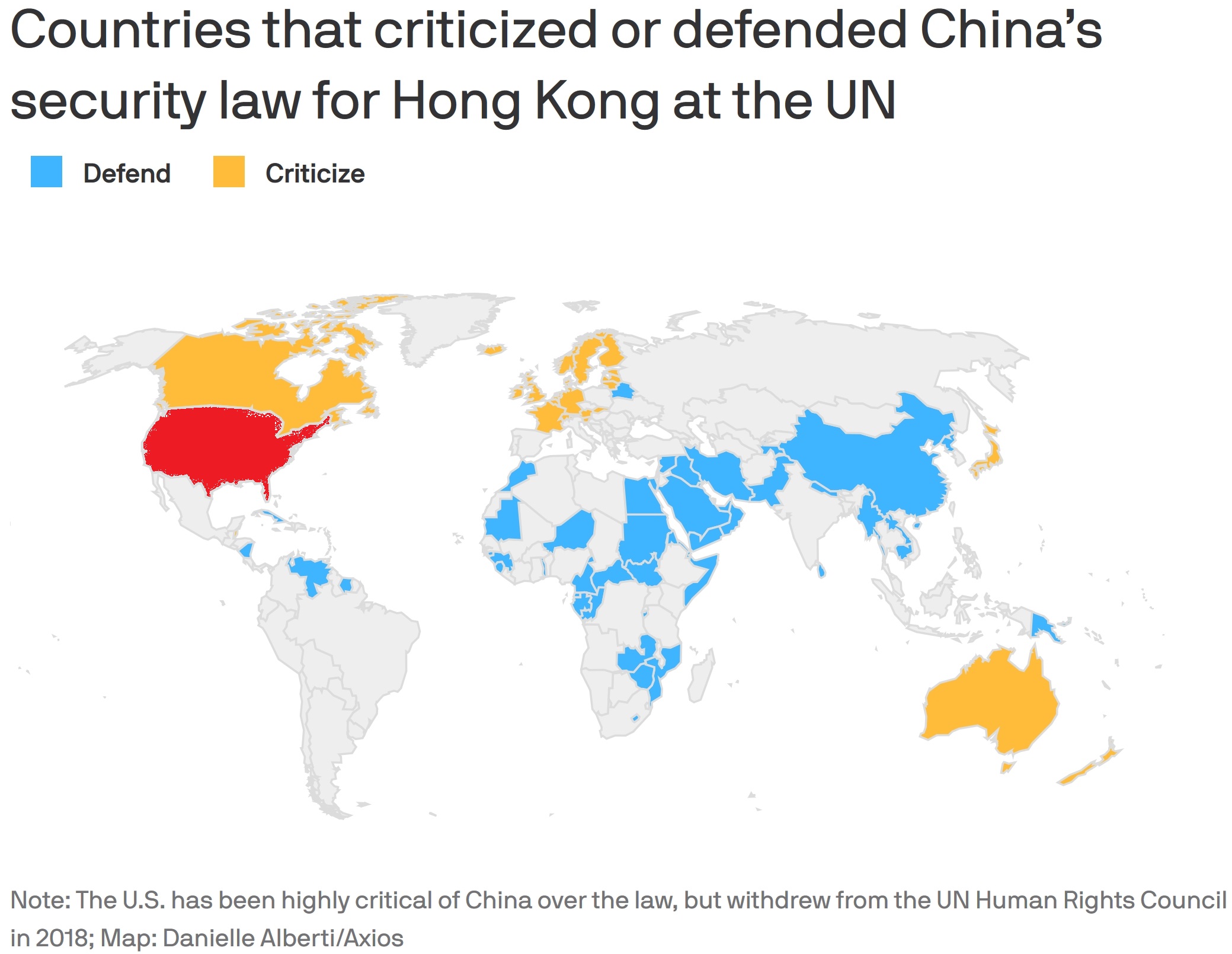 It shows a canny resemblance to the Democrat Freedom Index. Not surprising that many of these countries have major Chinese investment in their government projects, be it rail, road, or technology.

China does not have 'official' close allies, especially not large ones. They are rather unique in their ideology (perhaps because of their size)? Quoting Wikipedia:

Much of current Chinese foreign policy is reportedly based on Premier Zhou Enlai's Five Principles of Peaceful Coexistence, and is also driven by the concept of "harmony without uniformity", which encourages diplomatic relations between states despite ideological differences.

A little further down it's noted that it often sides with Russia (to form a block against the Western countries):

China has a close economic and military relationship with Russia, and the two states often vote in unison in the UN Security Council.

As for the second question, China is slowly expanding their influence by investing in foreign infrastructure (the 'Belt and Road initiative' mentioned by Michael McFarlane), and many critics claim this is a form of diplomacy, trying to gain political influence in a more secretive way:

Debt trap diplomacy is used to describe a type of diplomacy based on debt carried out in the bilateral relations between countries with an often alleged negative intent. It involves one creditor country intentionally extending excessive credit to another debtor country with the alleged intention of extracting economic or political concessions from the debtor country when it becomes unable to honour its debt obligations. The conditions of the loans are often not made public, with the loaned money commonly used to pay contractors from the creditor country. Although the term applies to the lending practices of many countries, it is currently most commonly associated with the People's Republic of China. Recent use of bilateral agreements through China's Belt and Road Initiative have furthered this association, especially in relation to commodity backed loans for developing nations.

The alleged victims are poor countries (mostly in Africa, but I've even seen the term applied to Greece); they could be falling for this (alleged) 'trap' because other investors like Western countries might impose additional conditions, like human rights or environmental ones.

Does China have close allies in the way the US and European countries do? If not, then how are they still able to "flex their muscles" politically?

China also has foreign military bases in the following countries:

This map is old Pre Covid and Hong Kong, but it shows the scope of China's economic influence.

Orange are Members of the Asian Infrastructure Investment Bank. Black are the six Belt and Road corridors Blue are the maritime corridors 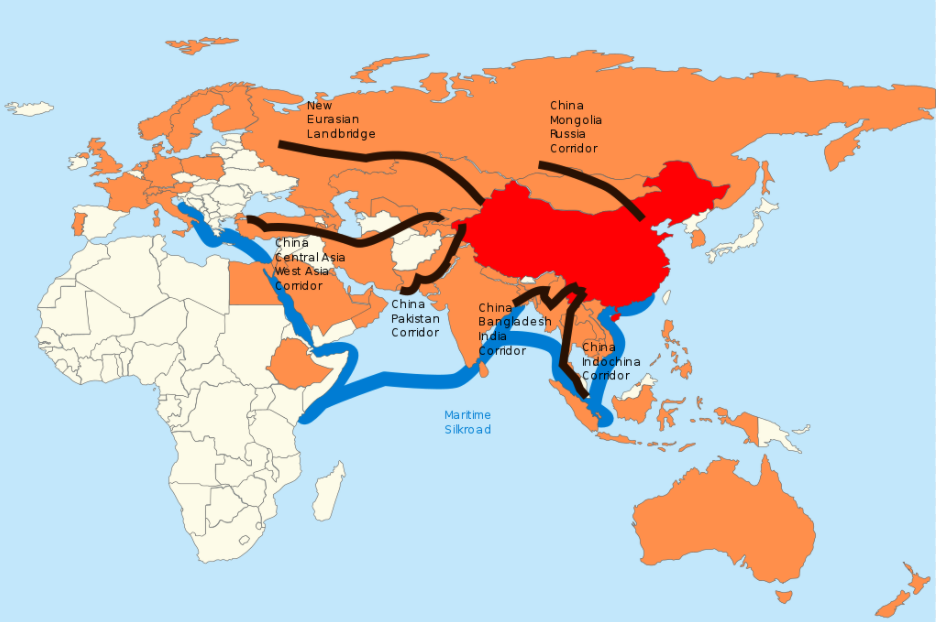 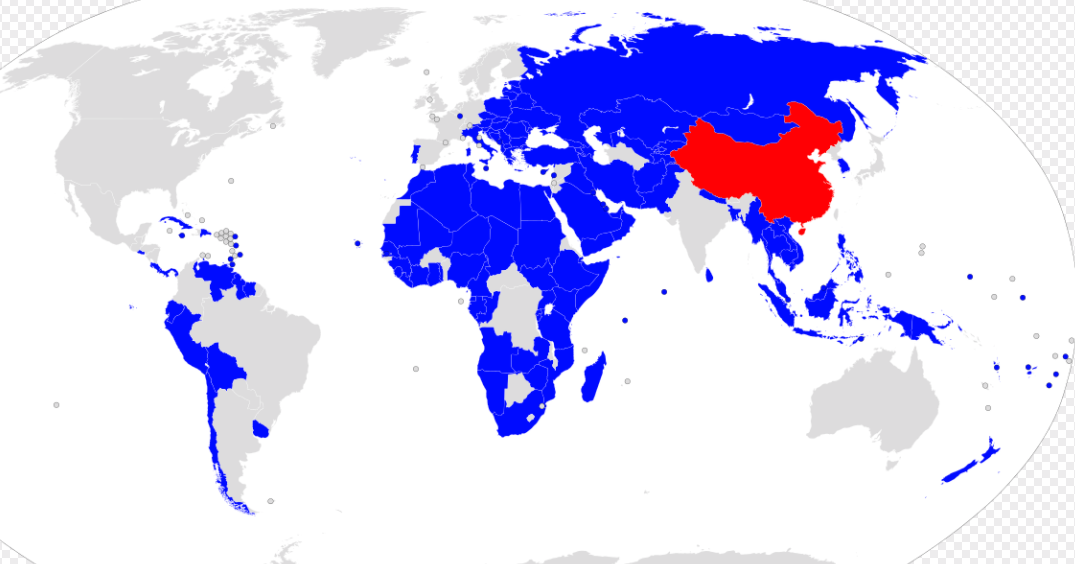 Some people would point out countries that are participating in the Belt and Road initiative. Most of them are poor. Aren't they?

Well Italy has one of the eight largest economies in the world and they are participating in the Belt and Road initiative along with Greec, Serbia and much of Eastern Europe.

China is one of the founding members of the Shanghai Cooperation Organisation. According to Wikipedia:

The Shanghai Five grouping was created 26 April 1996 with the signing of the Treaty on Deepening Military Trust in Border Regions in Shanghai, China by the heads of states of China, Kazakhstan, Kyrgyzstan, Russia and Tajikistan.

As for its activities, Wikipedia writes:

The SCO is primarily centered on its member nations' Central Asian security-related concerns, often describing the main threats it confronts as being terrorism, separatism and extremism. However evidence is growing that its activities in the area of social development of its member states is increasing fast.

Over the past few years, the organisation's activities have expanded to include increased military cooperation, intelligence sharing, and counterterrorism.

While I'm not in a position to compare the SCO to NATO, I think it's as close to 'China's NATO' as you're going to find.

One group of allies that are not mentioned are the nations with foreign relations with China certain members in the Pacific and Oceania. Fiji has diplomatic relations with China that it has had since 1975. China also occasionally gives aid to Fiji and remained friends even after the coup of December 2006.

Kiribati is allied with China and doesn't recognize Taiwan, recognizing the People Republic of China as the only China. The Federated States of Micronesia recognizes the PRC and has an embassy in Beijing.

Here, China has close allies similar to the United States in that its has close diplomatic ties and will provide aid for said ally in return for recognition and trade.

Not the answer you're looking for? Browse other questions tagged international-relations china power .

3
Reasoning & Benefits Behind the USSR Assisting China's Nuclear Program
6
Who are the individuals behind China's right against self-incrimination initiative?
5
Which countries are friends/allies in Middle East?
13
How wealthy are China's Central Committee members?
4
To what extent are nuclear weapons a precondition for global power or influence?
10
What are China's Interests in the Arctic?
29
What is the significance of Sec. Pompeo's labeling of China's treatment of the Uighurs as "genocide"?
5
China's Reactions to Independent Investigations