How can a US voting precinct only have a single voter?

I found a precinct in northern Minnesota where only a single vote was cast: a vote for the current president. This precinct makes me wonder if I could make or obtain my own precinct that has one voter: myself. This person appears to have done just that. Is this an isolated incident, a miscount, or something that I could do if I put the effort in? 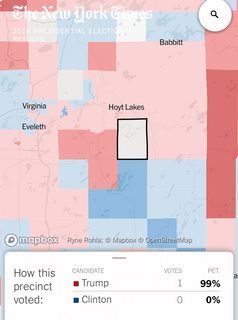 There are precinct that did not submit any votes, For example Hughes, AK. It is a "city" (with a population of 77, so a city in the US sense only) mostly ethnic Koyukon people (native Americans). Apparently nobody in this remote village in central Alaska chose to vote.

If you move to Hughes, you wouldn't have your own precinct, the other residents are citizens with the right to vote, but you may be the only voter, as the other citizens have previously chosen not to exercise their right to vote.

However you cant "make your own precinct". The precinct boundaries are drawn by a districting committee, you can't just draw your own. In Minnesota, the precinct seem to follow the PLSS townships. There are townships that have very low populations, sometimes a single homestead. This is likely what has happened in this precinct. There is a single isolated farming homestead, with only one voter. You are able to move to an isolated homestead, but I don't know if it would do you any good.

That particular precinct has a grand total of two registered voters, only 50% of which appear to have voted in the 2016 election.

You can find it in the "6B" area on this map on the Minnesota Secretary of State's website. It's the rectangle labeled "P-6". If you then look at the registered voters counts by precinct from this page, you'll see that "UNORG. PRCT. 6" has two registered voters, and that's not even the lowest number on that list.

There's two possible explanations for this, neither of which involve intentionally giving a person their own precinct. First, it's possible that there really are that few people living in the area. That area of the country can be very sparsely populated. Secondly, it's possible that there's a larger community there, but very few of them are eligible to vote or have done so. There are very few roads there - it's mostly forest - so it's most likely the first one. I wouldn't be surprised if the one road coming off of 130 is effectively the driveway to the one house in the area.

As to the question of why it's like this in the first place, look at how rectangular most of the precincts are in that map. Barring any notable reasons to draw them differently (natural boundaries, county borders, city borders, population densisty, etc), a rectangle is the simplest shape to fill the area with. It just so happens that this particular rectangle contains very few people.

23
Voter registration fraud: how is citizenship checked?
2
Could the US President be elected by Kevin Costner?
16
What are some examples of substantial voter disenfranchisement by electronic voting in the United States?
5
The US Voting System Vulnerabilities, Anti-Fraud, and citizen Assurance of Accuracy
4
What is the minimum vote share a party could obtain and still win a majority in a General Election?
1
What percentage of voters lived in a precinct where Republican house candidate got less than 5% of the vote in 2016 and 2018?
15
How will New York City physically implement the ranked choice voting algorithm with thousands of unique mayoral votings possible?