Is the American Voter Bot based on real data?

There is a Twitter account called American Voter Bot which supposedly tweets profiles of individual US voters. I am not sure if these profiles are real, because I saw a few bizarre tweets that seem too odd to be true. 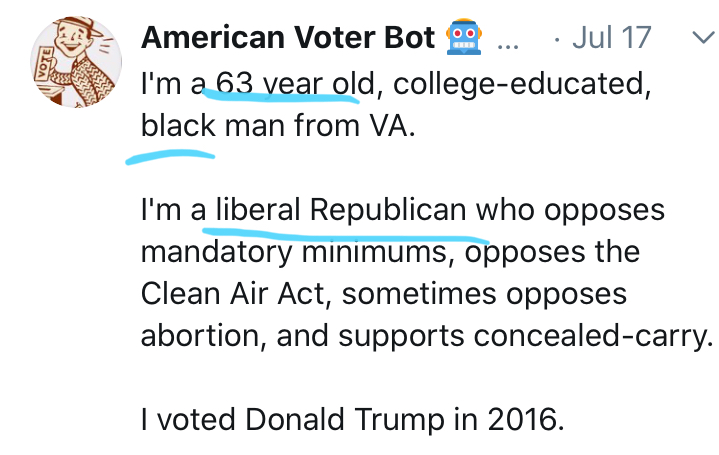 I am raising this profile in particular for a couple of reasons. First, only ten percent or less of black voters usually vote Republican. Second, the Republican Party is a mostly conservative party with only five percent of its members describing themselves as liberal. It does not make sense for those two reasons, even though this person does have some fairly conservative views.

I'm not going to dive further into the facts of this, but what I am going to say is that this account seems fake. Is this Twitter account based on real data?

Yes, this account is based on real data. The article which explains the idea behind the bot can be found here, and the GitHub project here. In particular, the following extract is relevant:

We created a Twitter bot and dubbed it “@American__Voter” (a nod to another seminal and related study) that uses data from the 2016 Cooperative Congressional Election Study, a nationally representative survey of 64,600 American adults, to fuel the bot. Every hour, a computer program running the account (1) randomly selects an individual who took the survey, (2) selects 3 various issue positions held by the individual, (3) and spits out the individual’s party, self-described ideology, and those 3 policy preferences in one convenient tweet.

Sometimes, the voters profiled by American__Voter will make “logical” sense: for example, a voter will support both gun control, the affordable care act, and oppose immigrant deportation, all of which represent liberal attitudes. But that’s not what makes it interesting. Rather, we are interested in those less “constrained” Americans.

The tweet you've picked out is an example of one of those "less constrained" Americans.

If we look at the dataset, we can confirm that an individual exists. The main dataset contains 64,600 individuals. This then breaks down as follows:

So this voter in particular does exist, or at the very least, a CCES respondent reporting this data exists.

4
The Data on the United Nations General Debate text
1
Data on US Presidential Elections by income and race
2
Data on vote and seats
2
Historical data on how the reliability of polling data depends on time remaining until a US presidential election
1
Anti-Asian hate crime data
7
Why don't governments publish raw IRV/STV election data, rather than summary statistics?