What explains this deviation in voting patterns? 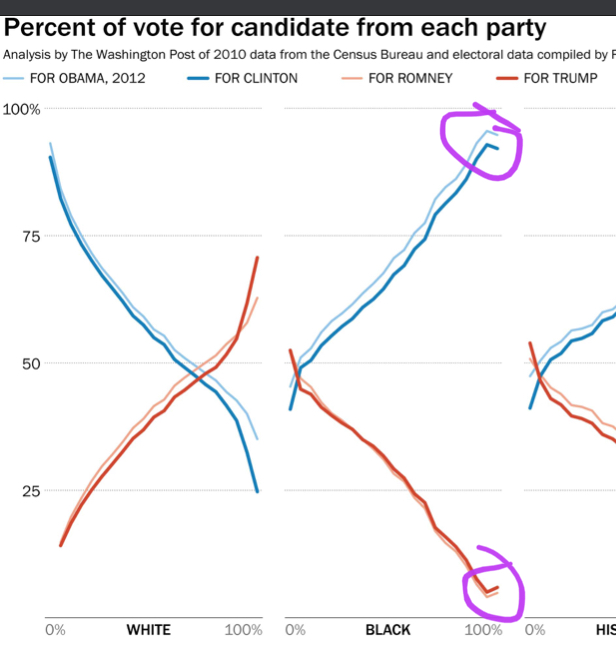 The Washington Post did an article about how most mostly black neighborhoods voted more Republican in 2016 than they did in 2012. The white one is pretty interesting (it looks like a distorted X), but the black one is pretty bizarre too.

As you might expect, the higher the percentage of black people, the lower the percentage of Republican votes up to neighborhoods that are about 95% black. This trend flips, albeit slightly, at the very blackest neighborhoods, those which are 95% or more black. This is not a one time occurrence even though the sample size is small. This happened in both 2012 and 2016, as the top shows.

5
Is Donald Trump the main reason behind the dramatic increase in Republican primary turnout?
8
What voting system is used (in the majority of states) for the US presidential (electoral) vote?
5
What is the process for re-evaluating voting results in light of a compromised voting system?
2
Are the votes counted by a voting machine with tampered seals valid?
9
Evidence in support of highly myopic retrospective voting
1
Has the US clarified where they (rather than Turkey) expect the SDF to withdraw from?
3
What is the difference between voting for presidential nominee vs. voting for delegates in Maryland?
1
Is California more liberal than Vermont?