Why has China chosen the Chengdu consulate specifically to be closed down?

Since China's order to close down the Chengdu consulate of the USA is a retaliation of the USA's order of closing down of Houston consulate of China, I have a feeling that there must be a rationale for China choosing Chengdu.

There have been other US consulates in China.

Why has China chosen the Chengdu consulate to be closed down?

The US had five(now four) consulates in China: Chengdu, Guangzhou, Shanghai, Shenyang, Wuhan. The United States also has an embassy in Beijing. They all have their own consular/embassy district, just like this picture quoted from Wikipedia: 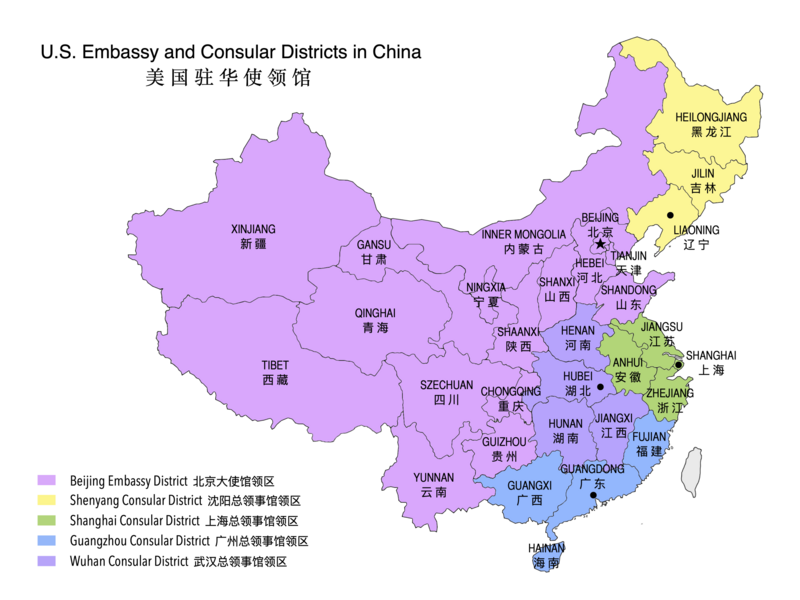 Without privileged diplomatic information, it's impossible to answer this question definitively. Diplomatic decisions of this sort are carefully weighed so that they appear as an equal response, not an escalation or capitulation, but no one outside the inner circles knows exactly what factors are being weighed in the decision. However, it is worth noting that the Chengdu consulate is the westernmost US consulate in China, and would likely be the one that normally handles issues related to both Tibet and the Uyghurs, two particular sore spots in US-China relations.

I would say part of the reason is also that Wuhan consulate is closed down and already evacuated, and I guess China wanted to revenge closing an open consulate as the one in texas used for spying on science stuff, where they were frantically burning hidden information upon closing in the backyard until the fire brigade came.

According to the channel China Uncensored on YouTube, they were also responsible in that consulate for uncovering some major corruption cases 8 years ago.

We can look at whether Chengdu is similar to Houston in the relative prominence of the cities in their respective countries.

Houston is the 4th or 5th largest city in the US and has 28-37% of the population of the largest city (New York), depending on whether we use city limits or metro area.

Chengdu is the 7th largest city in China and has 34-40% of the population of the largest city (Shanghai). So, it seems relatively proportionate.

The questions involved in these decisions are given fascinating elaboration by Douglas Hofstadter and Robert French -- see discussion of "retaliation" on p. 331.

Other answers have suggested that Chengdu is "diplomatically equivalent" to Houston, but I would suggest that it is significantly less so. The region around Houston hosts hugely important scientific and industrial bases, whereas Chengdu is not nearly as technologically significant as the coastal cities. China does consider it somewhat sensitive due to it's relative proximity to Tibet, Xinjiang, and nearby military facilities, but given the extreme restrictions on movement in such areas that already exist, it is unlikely to inconvenience the US in that regard. Also, Chengdu is in the geographically somewhat remote Sichuan province. In fact, there is an old saying in China: "It's easier to go to heaven, than to go to Sichuan". Still, given the other options, it is probably the most "diplomatically equal" choice.

Other factors have probably also been considered. Closing down an embassy in a major city would signal a serious deterioration in relations, and would impact domestic business confidence. Despite the growth of their domestic economy, China is still sensitive to a drop in exports, due to the multiplier effect that (high-tech) exports have on the economy, their ability to co-opt technology from Western firms who manufacture in China, and also because a strong current account surplus support's their ability to maintain capital controls. On balance, Chinese exports to the US are much more important to them than US exports to China are to the US.

Another consideration is the fine balance that the government has to walk between encouraging nationalistic sentiment on the one-hand, and keeping it under control. Although nationalism often supports C.C.P. narratives, an excess creates unrealistic expectations. We saw a similar thing play out during the Senkaku Islands Dispute, where anti-Japanese protests became a problem for the government and eventually had to be suppressed.

In summary, their choice suggests that, for now at least, they want to deescalate the situation. This accords with their view that Western politics has a relatively short-term memory when it comes to China relations; they may be satisfied if they can "bank" the change of status of Hong Kong, and return back to normal relations with the West as soon as possible, even if this takes a few years. This pattern of major advances, followed by a "normalization" period has happened many times before, for example following their construction on the Paracel Islands. Under the current administration, the periods between such advances appears to have been reducing as their self-confidence increases.

Not the answer you're looking for? Browse other questions tagged united-states international-relations china diplomacy .

14
Why do some countries recognise Taiwan as the sole legitimate government of China?
11
Why is China annoyed at the installation of THAAD in South Korea?
0
Why has China signed US$250 bn deals with the USA?
42
Why was Singapore chosen to host the summit between Donald Trump and Kim Jong-Un?
3
If China is as good as other developing countries at protecting IP, why is the U.S. administration labelling China as a trade cheat?
1
Why does China have no diplomatic relations with the Holy See?
10
When Fauci called for China to shut down the “wet markets” (on Fox News) was he specific what he meant by that term?
1
Why have China and Russia gone down different paths?
25
Does the Chinese Consulate in Houston have to comply with the closure order?