Why are Deep South states said to vote so lop-sidedly Republican, when they have high percentages of African Americans?

States like Mississippi, Alabama, and Louisiana, have in the range of 30% African Americans, who, from what I can tell, vote about 90% Democrat. Yet these states vote reliably Republican.

What is the explanation?

Using the Cooperative Congressional Election Study 2018, we can test your hypothesis that non-African Americans skew as far to the Republicans as African Americans do to Democrats. Let's limit ourselves firstly to voters in the deep south, which I'll define as Louisiana, Mississippi, Alabama, Georgia, & South Carolina. This gives us a survey population of 4,920.

We can then stratify the survey population by race, and look at how they identify politically. Looking at the 1,155 of these respondents who self-identified as 'Black', we can construct the following breakdown - clearly black respondents skew heavily towards the Democratic Party. 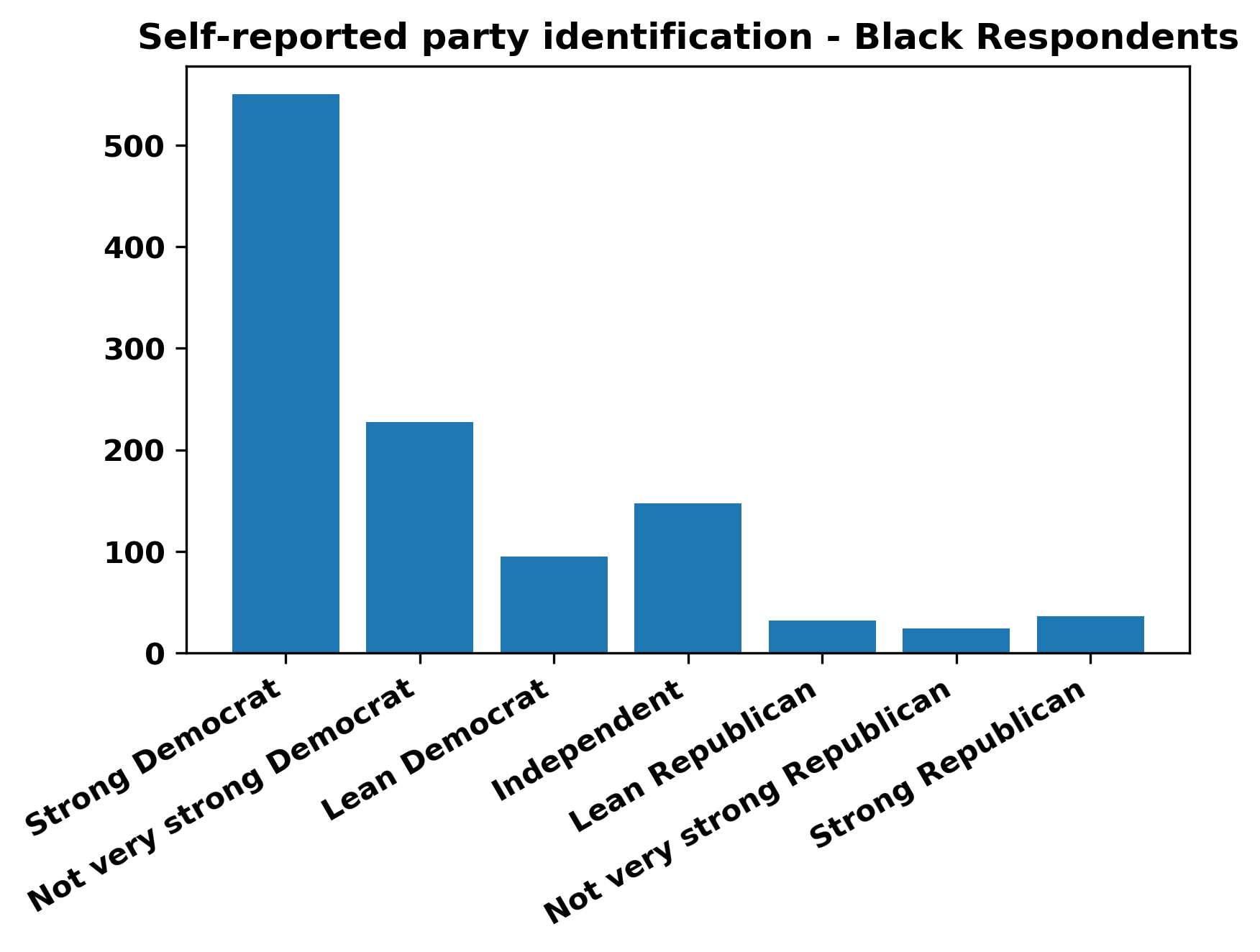 Looking now at the remaining respondents, we can obtain a very different graph - we see a large number of 'Strong Republican' respondents, as well as a general skew towards the Republican end of the scale. However, there isn't quite such a well-defined skew as the first graph. 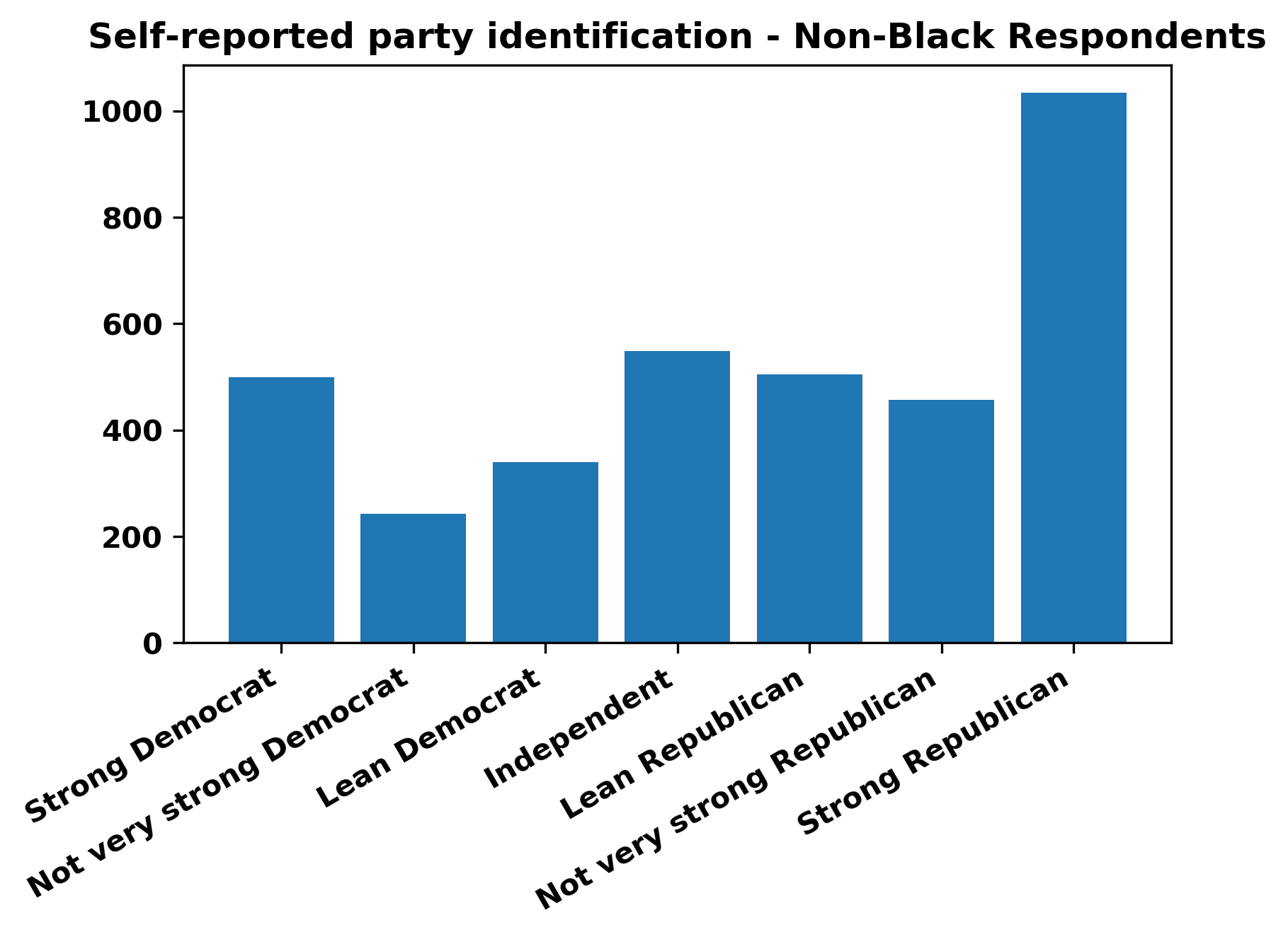 Despite the skew not being quite so dramatic, it is dramatic enough to ensure that the states as a whole generally vote Republican. Firstly, the 40% figure in your question isn't quite accurate - according to the American Community Survey 2018 figures, Black or African American Alone makes up between 26.6% (South Carolina), and 38.0% (Mississippi) of the population, for a total proportion of around 30.6% of the population of the above five states. This factor, exacerbated by a small turnout gap, allows the vast Democratic lean amongst the Black population to be outweighed by the relatively smaller, but still large, Republican lean within the non-Black population.

However, on a more local level, the African American demographic does have a significant effect. As the population tends to be centred around the 'Black Belt', this allows the Democratic lean of the demographic to be more obviously represented. For example, the county-level map of the 2016 election provides an interesting depiction of this phenomenon. 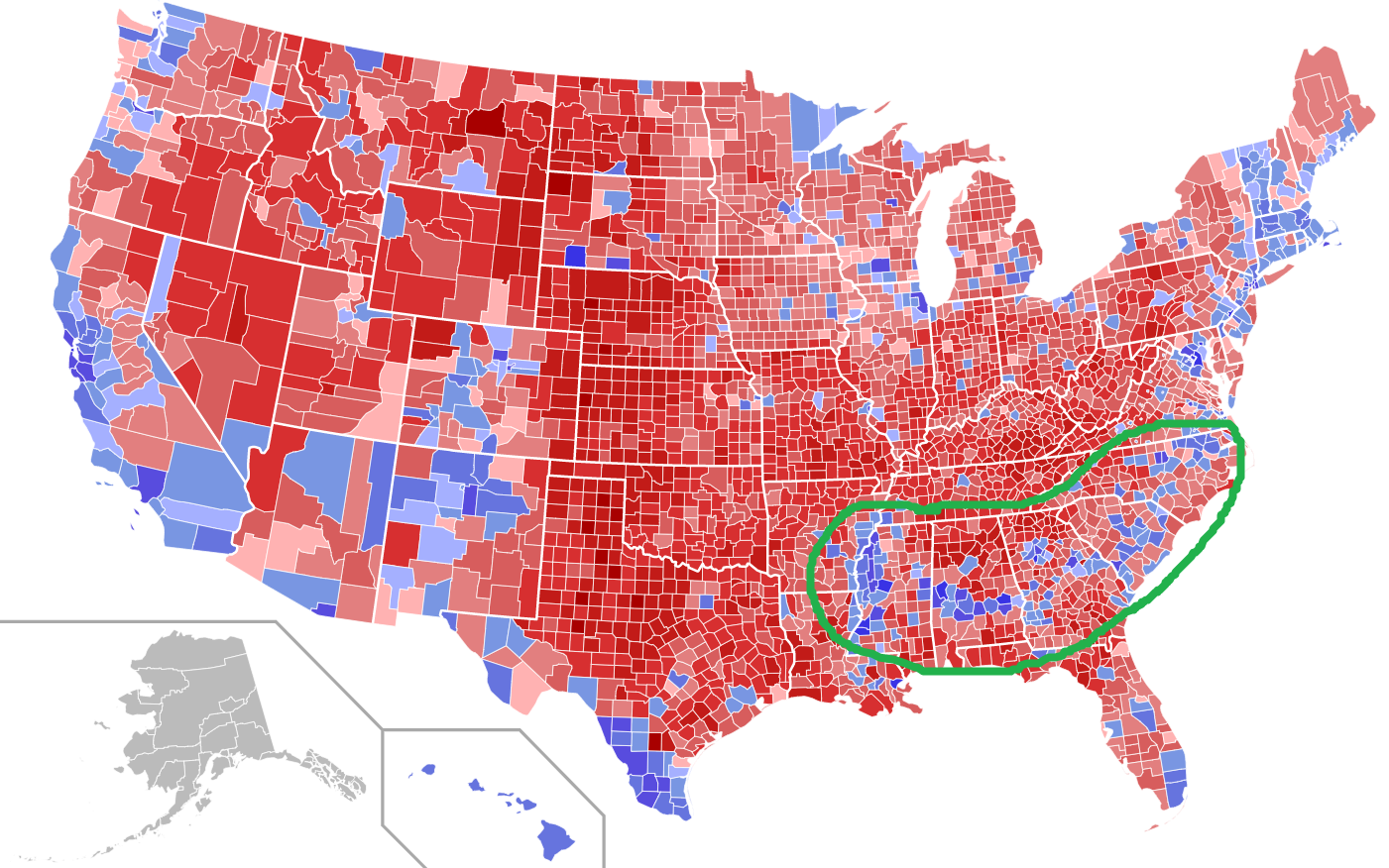 Even ignoring demographics there is still a key reason here.

In “Growth in the U.S. Ex-Felon and Ex-Prisoner Population, 1948 to 2010,” Sarah Shannon and colleagues estimate that one-third of black men had a felony conviction in 2010

Not only do many states outright ban felons voting, but once the bans expire there is extra paperwork to restore it. There are additional restrictions on driving that people have which interfere with their ability to register and vote. These restrictions are more more common in the south 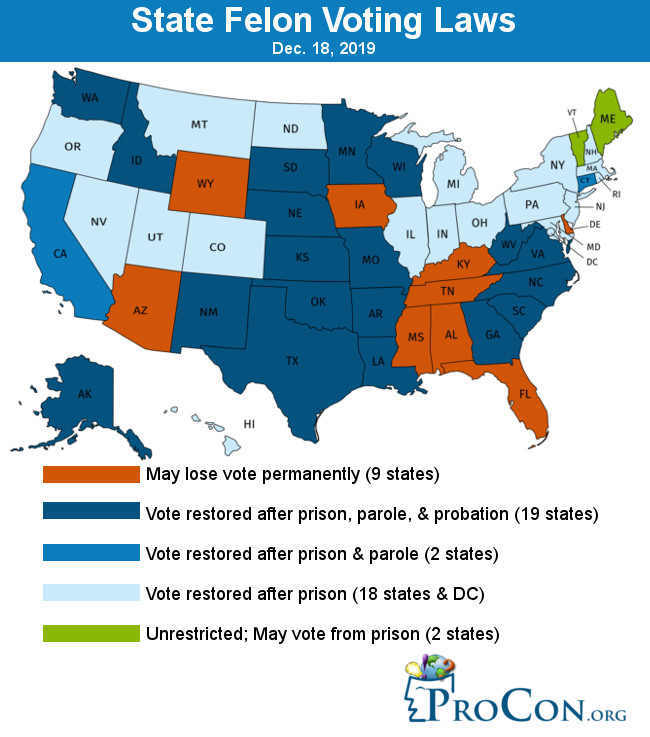 So even if the demographics favored blacks there are parole and other restrictions that limit their ability to vote, and these issues affect the democratic demographic the most.

The Republicans were very successful at gerrymandering in states where they started with a majority and they used racial data to do it. It's called Project REDMAP.

For example, Georgia: In 2016, the overall state percentage of voters was 45.35% for Clinton and 50.44% for Trump, which seems like a moderately close race. But only 5 out of 14 representatives (36%) are Democrats. If you look at the breakdown of the presidential race by congressional district you can see that the voting strongly correlates to race but most of the non-white people in Georgia are packed into only four congressional districts.

Mississippi, for example is about 60% white 35% black (and small numbers of other racial groups)

In 2016, the state was comfortably Republican, with Trump winning 57% of the vote. so let's run the numbers, assuming that 90% of the black vote was Democrat, and that there were no significant differences in voter turnout, what percentage of of the non-black population were Republican?

So about 82% of the non-black population would need to have supported Trump in this simple scenario.

Now If we look at exit polls: There does not appear to be an exit poll of Mississippi, but we can look at nearby states: Georgia has white support for Trump at 75%, Texas has support at 70%. Mississippi is more of a deep South state than these, so we might expect slightly higher support for Trump, and also Texas has more white-hispanic people (who tend to favour the Democrats)

Thus 82% support for Trump among white Mississippians is not implausible. There is also a racial turnout difference, and probably greater support for the Republicans among older rural black voters.

Another State, for which there is an exit poll, is South Carolina:

The state is 27% black. In the exit poll black voters skewed 94% democrat (!) and white voters skewed 70% republican. But the electorate was only 19% black. There were significant numbers of black non-voters, resulting in a 54:40% win for Trump.

You are correct. There is a slight but significant racial turnout gap and Republicans consistently win low percentages of the black vote. Combine that with general demographics and it is unsurprising that Republicans have consistently dominated the South in recent decades.

Not the answer you're looking for? Browse other questions tagged united-states election republican-party democratic-party demographics .

27
What is the motivation for felony disenfranchisement?

22
What makes California a Democratic state?
23
What caused the racial shift of America's parties?
31
Is there a *political* schism between former Soviet Jews and other Jews in the US?
34
Why are the Democrats & Republicans so homogeneous in their opinions of impeaching Trump?
5
What percentage of African-American Republicans are conservative?
2
Are liberal republicans concentrated in the Deep South?
4
Why does Trump do (somewhat) well with Native Hawaiians and Pacific Islanders?