Will the creation of a Washington DC state be unconstitutional?

If the House of Representatives and the US Senate ever pass a bill duly signed by the President creating a new state out of Washington DC can it be held as unconstitutional as it is required by the US constitution to have the federal government in a region which is not governed by any state. I do understand that the proposed state would leave all the buildings such as Congress inside a federal land which will be excluded from the state, but who is to decide the borders of such a land? The constitution does not spell that out as far as I know and this leaves open to a potential supreme court case on the creation of a DC state if it ever happens?

Probably not, but this will likely end up in the Supreme Court.

However, there will be an issue (political, rather than legal) with respect to the 23rd Amendment, which gives the District of Columbia its 3 votes in the Electoral College. If it's intended that the new seat of government would have very few people living in it, it would be seen as unfair for this district to still have its electoral votes.

Can Congress meet within a state?

Congress can meet wherever it wants. Let's start with the relevant excerpt of the Constitution:

The Congress shall have Power...

To exercise exclusive Legislation in all Cases whatsoever, over such District (not exceeding ten Miles square) as may, by Cession of particular States, and the Acceptance of Congress, become the Seat of the Government of the United States

Note the word "may." There's no requirement for this District to be the seat of government. Congress is given the authority over such a District if it exists. So could the capital be located inside of a state? Definitely. How do I know this? Because the capital of the United States was located outside of DC for about a decade after the Constitution was written.

How can they determine the boundaries of federal land?

The federal government owns land in Washington DC, but most of the District is privately owned (including my house). Here's a map from the Washington Post: 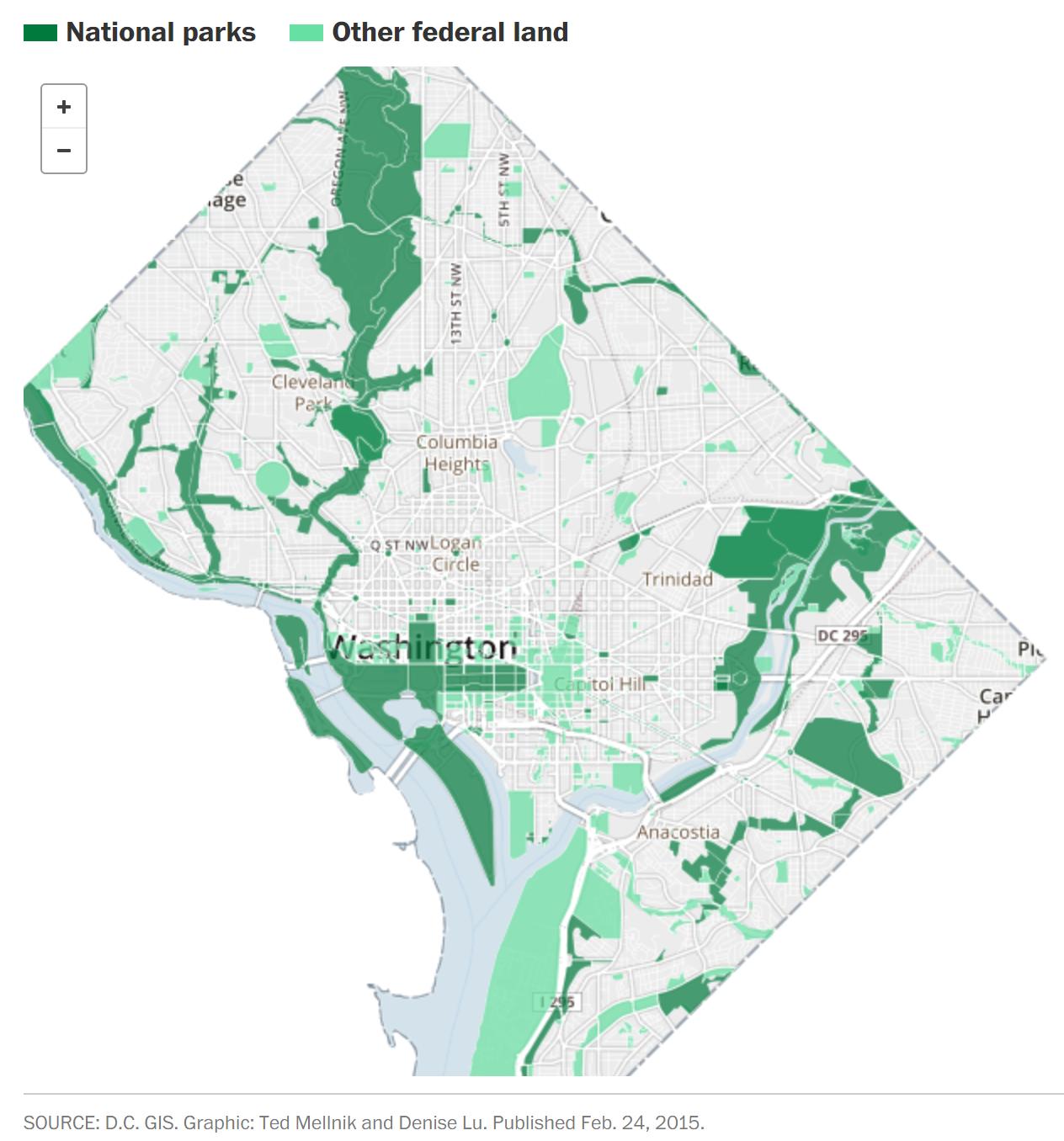 If a federal district were carved out of the state of DC, it would most likely consist of the green portion just below the word "Washington." That includes the White House, Capitol, National Mall, federal memorials, and other federal resources. The light green part at the very bottom is a military base, so that'll stay under federal control no matter what.

Its complicated... the US constitution is a bit vague. The establishment clause permitted (but did not require) creation of a federal district, but it was conditional on states cedeing (relinquishing control) of the land to create it. The constitution doesn't say anything about reversing the process, so the constitutionality of it has been subject to heavy debate

A somewhat different approach of "uncedeing" the land back to Maryland has historical (but not legal) precedent: originally the district was composed of two counties: Alexandria and Washington. Alexandria County DC was re-absorbed into Virginia, in a process more precisely referred to as retrocession, to make Arlington County VA. But the constitutionality of that hasn't been decided, the Supreme Court avoided making a ruling on it.

Such a retrocession would could take care of the "taxation without representation" concerns, but would be unlikely to satisfy statehood proponents, who want not only the one voting congressional delegate, but two additional senators beyond the two senators Maryland has. That obviously didn't happen for the residents of modern Arlington County, VA.

As the constitution doesn't specify the geographic boundaries (other than max area) of the federal district, I believe there would be little issue reducing the size or even changing the location of the district.

Not the answer you're looking for? Browse other questions tagged united-states constitution supreme-court washington-dc .

6
Was the 2003 Iraq War an undeclared war to circumvent the Geneva Conventions?
6
Would a Social Credit System like the one contemplated in China be Constitutional In The U.S
13
How do “originalist” interpreters of the constitution cope with the 2nd amendment?
30
Why isn't there a serious attempt at creating a third mass-appeal party in the US?
3
How were unconstitutional laws invalidated before Marbury v Madison?
3
Why does the Federal Government of the United States not have a plural executive, like most of its states?
31
A new proposal suggests subdividing Washington D.C. into 127 new states so that they can change the Constitution at will. Is this possible?
6
Why does Washington DC elect a Delegate to the House AND a United State Representative?
4
Why has Washington DC trended more Democratic over time?
3
Is there a “unified command” over all the defense forces in Washington D.C.?