Are minorities in Pakistan excluded from social security schemes?

I came across this article today: Poor and desperate, Pakistani Hindus accept Islam to get by and my question is inspired from that article.

It was suggested to include non-Indian sources. Here is one

There would be several examples probably where poor minorities in Pakistan have to convert to Islam to get food or dignity.

Are minorities in Pakistan excluded from social security schemes in the country? 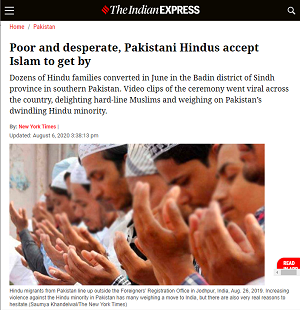 Firstly, (and this is important) when asking any question on Pakistan, kindly avoid citing Indian sources:

The linked article is written by Maria Abi-Habib who writes for NYT and is based in New Delhi, India. I checked her written articles in NYT and I found that all of her Pakistan related writings are full of negative connotations of Pakistan.

At independence in 1947, Hindus composed 20.5% of the population of the areas that now form Pakistan. In the following decades, the percentage shrank rapidly, and by 1998 — the last government census to classify people by religion — Hindus were just 1.6% of Pakistan’s population. Most estimates say it has further dwindled in the past two decades.

... this is a false statement as by 1971 East Pakistan (aka Bangladesh) got separated from West Pakistan and most of the Hindu population was from the East and they stayed in the East.

This article also doesn't make any distinction between forced and voluntary conversion.

Most of the Hindu population lives in the interior of Sindh which is a hot, arid, and inhospitable place to live in. No option for them to grow food. So, it is nearly impossible for them to change their financial status.

Also, Sindh is a very corrupt province of Pakistan where the Pakistan People's Party(PPP) is in power and PPP doesn't let the federal government interfere in Sindh and the ruling party PTI is having a tussle with PPP in this regard. So, the situation is the same for all. Hindus are neither an exception nor targeted.

By the way, as far as I recall, last year PM Imran Khan distributed Health Cards to the poorest people of the interior Sindh.

Not a very complete answer, but I hope it may be helpful to note that certain specific NGOs in Pakistan are accused of discriminating in the distribution of aid.

Here is a press release from the U.S. Commission on International Religious Freedom. It says that the USCIRF Commissioner urges, "the Pakistani government to ensure that food aid from distributing organizations is shared equally with Hindus, Christians, and other religions minorities." It links to a news story about the Saylani Welfare International Trust as an example of the alleged issue.

I would not say this proves that the assertion asked about in the question is entirely accurate, but it does point to the possible context of the conversions.

Not the answer you're looking for? Browse other questions tagged pakistan social-security .

5
How does Social Security work in the United States?
1
Can Social Security in USA be funded outside of FICA taxes?
2
What was the legal justification for H.R.2419 (protection of social security)?
1
Social Security and the impending default
2
Can the derivatives market save social security?
2
As of August 2020, are Social Security Offices in the US closed due to COVID-19?
1
Has Pakistan's Federal Ministry for Human Rights condemned the treatment of Muslims in China?
1
Why do Pakistani and Bangladeshi Hindus frequently move across the borders but Indian Dalit Hindus don't?