I would expect that restricting voting to mail-in votes would result in larger proportions of older, more established voters voting compared to younger, less organized voters, some of whom do not even use the mail system at all. Since older people tend to be Republicans, wouldn't this tend to lead to Republicans getting disproportionately more votes?

I know we see this in off elections and special elections held in non-presidential years. Republicans tend to do better because the older demographic is more likely to vote in "boring" elections. Wouldn't we see the same thing if all voting was by mail only?

According to a June 2020 investigation published in the Proceedings of the National Academy of Sciences, the imposition of a universal vote-by-mail policy, whereby every voter would be sent a ballot to complete in advance of the election, would have no effect on either party's share of turnout or vote share. The study does, however, find that the policy would modestly increase overall average turnout rates.

The study has been conducted by looking at data available from the three states which have rolled out a universal vote-by-mail policy at the county level in a staggered fashion; Washington, California, and Utah. Looking at these states specifically allows a comparison to be made between outcomes in counties within the same state which haven't yet adopted the policy and those that have.

Three areas of interest are then investigated:

Their results are summarised in the tables below. In table 2, the first three columns look at how the partisan composition of the electorate would change - their largest estimate is that the increase in Democrat turnout share would be 0.7%, while the inclusion of linear and quadratic county-specific time trends reduce the effect to 0.1%. Similarly, the last three columns show an estimated increase in vote share for Democratic candidates of 2.8%, which shrinks further to 0.7% after the inclusion of trends, which also shrinks the standard error. The study argues; 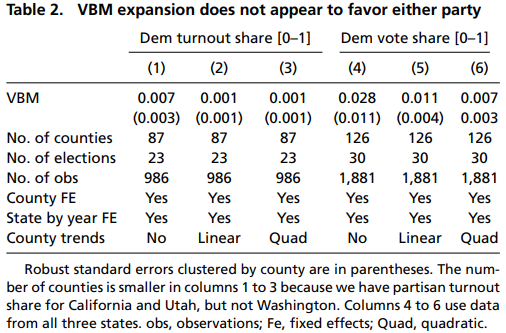 Table 3 shows the effect on turnout in general, and the share of votes conducted by mail. Over all trends, these effects remain fairly steady at around a 2% increase in turnout, and a ~1.5% increase in VBM share. 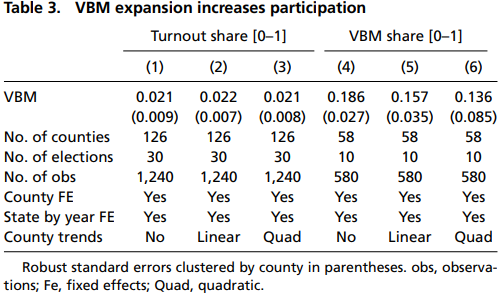 No, the available evidence suggests that neither party would benefit overall.

Bottom line: By making it a little easier to vote, voting by mail probably increases the likelihood of the marginal Democratic voter engaging in the process. (Though younger and lower-income voters, who tend to vote at lower rates, also tend to not take advantage of voting by mail.) But it also makes it easier for more habitual older voters, who tend to vote more Republican than younger voters, to cast a ballot. Thus, on balance, any associated partisan effects from voting by mail have tended to cancel out.

Here's one of several relevant graphs from the article: 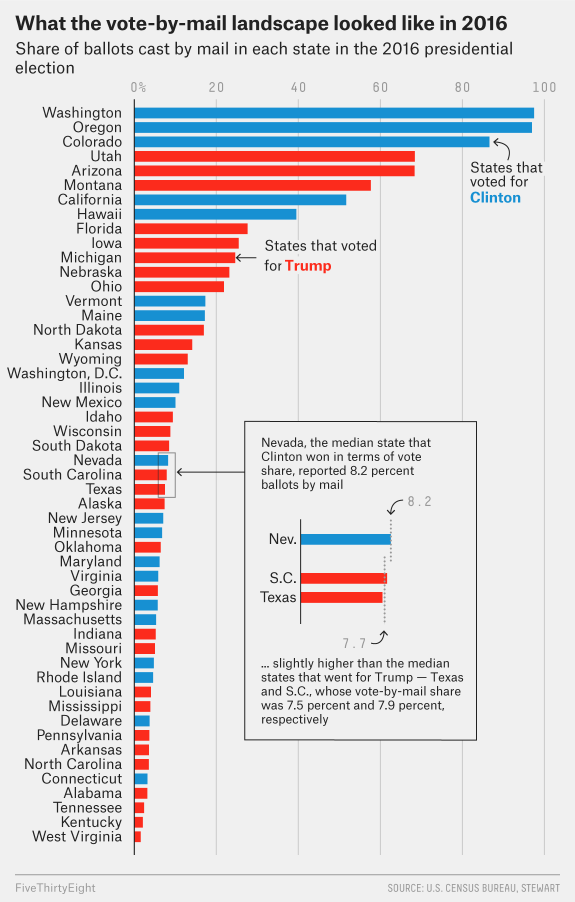 The NY Times also did a piece about this question in May and the gist is the same.

In an in-person voting system, an individual must go to the correct polling place to get a ballot. It requires planning and preparation on the part of every voter. In a mail only system, individuals will receive ballots without making any effort at all. This brings up a number of questions, some of which can be adequately answered by the surveys from other answers. Others may be difficult to answer until after a major election is conducted using a mail only system, and then it may still be open for debate.

A mail-in only system would be different than an in-person or hybrid system. Any change at all to the voting system would result in a different number of total ballots counted. A different number of ballots could mean different percentages for certain candidates or initiatives. But whether the difference would be significant or actually change the outcome of any particular race seems impossible to prove - even after the fact.

What could be stated with more certainty is that regardless of the balloting system employed during the 2020 election, in the after math, both major US parties will claim that the other took advantage of the current pandemic and cheated somehow. And most likely, one party will claim that the election was stolen by the other. In such an unsettling and unpredictable year, it's nice to know that there are still some things we can count on.

The question is about whether mail in voting would help the Republican party. The other answers cite studies the suggest changing the voting system would not affect the outcome of the election. These questions posed above are NOT answered by the studies cited. The primary point of my answer is that in fact, we don't know the answer to the OP's question. Pretending that we know may bring comfort to some, but the studies are not definitive and do not claim to be. The study in the most accepted answer states:

Each individual is free to interpret the meaning of 'does not appear' for themselves, but by any reasonable standard it means that the study is not conclusive. The study shows a 2% increase in voter turnout, but the only offered explanation is that it is consistent with conventional wisdom and other literature. They did not definitively determine why more ballots are counted in VBM.

The study also has 3 caveats. The third doesn't apply to the OP's question as it is about VBM only. The others are important.

First, our evidence is about the effects of counties opting into universal VBM programs during normal times—that is, the counterfactual we are comparing voting-by-mail to is a normally administered in-person election. The effect of VBM programs relative to the counterfactual of an in-person election during COVID-19 might be quite different, and the effect would depend on whether we believe COVID-19 disproportionately deters Democrats or Republicans from voting...

Second, our results say nothing about whether VBM should be implemented nationwide. There may be reasons to worry about rolling out nationwide VBM that we cannot study; for example, it might have disparate impact on minority voters, who, some claim, utilize VBM at a lower rate...

So clearly, they aren't sure if implementing a mail-in system for 2020 would impact the outcome of the election. The study is good and is the best information we have, but it is not definitive and there are many questions which have not been answered. The only thing it actually proves is that more ballots are counted in VBM. My answer is, it will be different as proved by every study ever done on the subject, but no one really knows if one party would benefit. It is either unscientific or disingenuous to pretend that we do.

Edit2: After these results in Michigan, it seems clear that we should consider human nature in addition to conventional wisdom when considering how mail-voting could be different. From the article:

A few of the questions above have now been answered definitively. And this new information begs other questions:

4
Why are Democrats more likely to vote by mail than Republicans?

13
Does association of age to political party imply changing of political affiliation as one ages?
10
Does it really make a difference when more people vote?
6
Is there a tendency for democracies to pander to older voters?
17
In 2016, why did the GOP win the House popular vote while Clinton won the popular vote?
2
Would an online voting system using a secure id be more subject to coercion than the current mail in ballot system?
17
What fact-based arguments exist that mail-in voting would lead to significantly higher instances of US voter fraud?
1
Is California more liberal than Vermont?
9
How many mail-in votes were disqualified for failing the signature match test at the US presidential elections in 2020?