What position & power does the Church of England assume in the upper house of Lords?

The Church of England (C of E) is the established church of England.[3][4][5] The Archbishop of Canterbury is the most senior cleric, although the monarch is the supreme governor. The Church of England is also the mother church of the international Anglican Communion. It traces its history to the Christian church recorded as existing in the Roman province of Britain by the third century, and to the 6th-century Gregorian mission to Kent led by Augustine of Canterbury.[6][7][8]

The House of Lords, also known as the House of Peers and domestically usually referred to simply as the Lords, is the upper house of the Parliament of the United Kingdom. Membership is granted by appointment or by heredity or official function. Like the House of Commons, it meets in the Palace of Westminster.2

The principal power of the Church of England in the House of Lords is vested in the Lords Spiritual - Church of England bishops who are granted seats in the House. Since the Bishopric of Manchester Act 1847, the number of Lords Spiritual has been set at 26. Five of these seats are granted automatically - the Archbishops of Canterbury and York and the Bishops of London, Durham and Winchester - while the others are granted to the most senior bishop when a vacancy arises. This was slightly altered a few years ago when the Lords Spiritual (Women) Act 2015 gave women bishops precedence over male bishops until 2025.

These Lords have exactly the same rights and privileges as Lords Temporal, including voting rights. In addition, one Lord Spiritual is always required to lead prayers at the start of each sitting, so in general, at least one bishop tends to be present during the proceedings of any given day. They are not affiliated with any party, although they do not sit with the crossbenchers either, instead having their own benches within the Chamber - on the government side, closest to the throne. 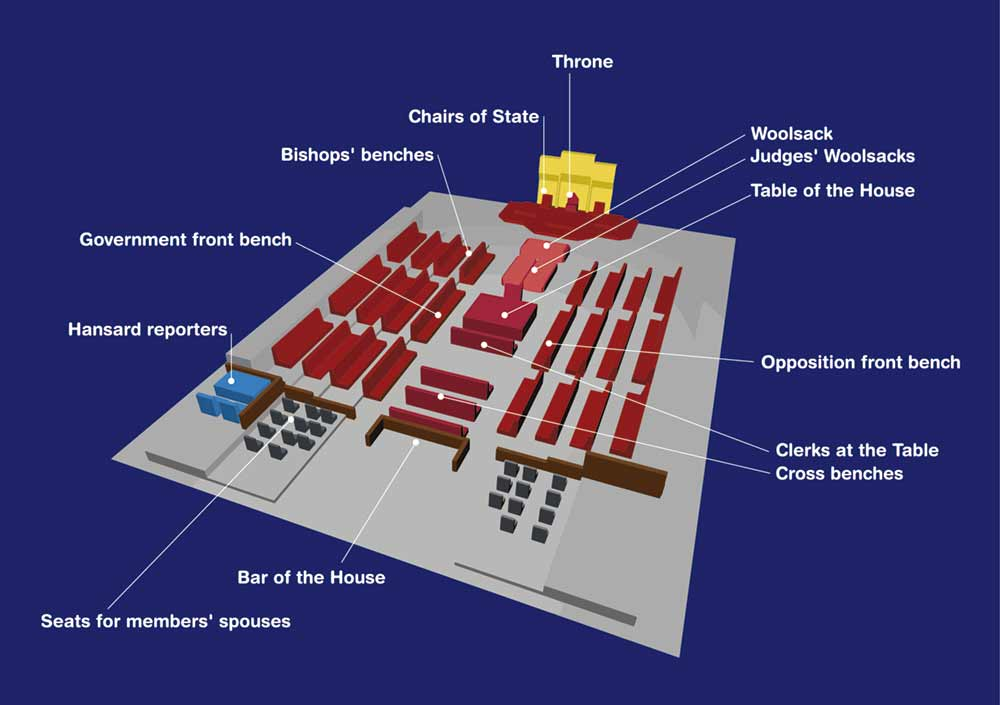 To put this role in perspective, the 26 Lords Spiritual make up about 3% of the 772 seats in the Lords, and attendance relative to other members is low. A Parliament research briefing published in 2017 provides the following statistics: 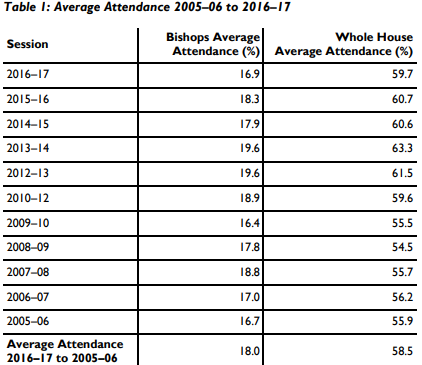 The average turnout of the Bishops in all divisions since 1999–2000 is 3.91 percent. This figure includes both whipped and un-whipped divisions. Since 2010–12, the Bishops collectively cast, with the exception of the 2016–17 session, more votes against the Government of the day than for it. In 2016–17, the Bishops were divided equally, casting 53 votes for the Government and 53 against over the course of the session.

The Church of England also has the de facto power to control legislation concerning itself. This was granted by the Church of England Assembly (Powers) Act 1919, which allowed the Church Assembly (subsequently transferred to the General Synod in 1969) to propose "Measures" to Parliament. These are scrutinised by the Ecclesiastical Committee, and if passed by both Houses of Parliament, have the same force as primary legislation. I call it a de facto power, as Parliament retains the power to introduce legislation regarding the Church, but as a constitutional convention, does not do so without its consent.

Finally, the Supreme Governor of the Church of England, more commonly known as the Queen, confers peerages, thereby controlling the membership of the House. In practice, this is performed in accordance with the advice of the Prime Minister.

The powers of the Church of England in the Lords, and Parliament as a whole, although fairly slight, are according to Humanists UK "extremely unusual and anti-democratic". In particular, they note:

The only two sovereign states in the world to award clerics of the established religion votes in their legislatures are the UK and the Islamic Republic of Iran (a totalitarian theocracy).

I thought to cite some UK constitutional law textbooks, if you wanted to check out the footnotes and read further.

Third, there are 25 Church of England bishops and archbishops. This has been criticised. The Royal Commission on House of Lords Reform—of which more later—concluded that while the inclusion of religious, as well as moral and philosophical, views in a second chamber may be valuable, such representation should not be restricted to a single denomination or faith given the religious diversity that characterises the UK today.113

The Lords Spiritual are 26 bishops of the Church of England; they hold their seats in the Lords until they resign from their episcopal office. The Archbishops of Canterbury and York and the Bishops of London, Durham and Winchester have the right to a seat. The remaining Lords Spiritual are the 21 other diocesan bishops having seniority of date of appointment, with the exception of the Bishop of Sodor and Man who may not take a seat. When a bishop with a seat in the Lords resigns or retires, the place in the Lords is taken by the next senior diocesan bishop.226 In 1847, it was enacted that the number of bishops sitting in Parliament should not be increased whenever a new diocesan bishopric is created.227 The Lords Spiritual (Women) Act 2015 acknowledges the creation of female bishops, and at the request of the Church of England makes provision to accelerate their appointment to the House of Lords.
Although justified historically, such representation is bound to be closely questioned in an age which is simultaneously both more multicultural and more secular. It is possible for members and clergy of other churches and faiths to be appointed under the Life Peerages Act 1958, in the case of those churches and faiths which do not prohibit their senior clergy from accepting positions of political authority.228 But this is not the same as an entitlement to a guaranteed number of places. It is striking nevertheless that the House of Lords Reform Bill introduced by the Coalition government in 2012 proposed to retain the Lords Spiritual in what would have been a predominantly elected House. The government’s ill-fated Bill proposed gradually to reduce the number of Lords Spiritual from its current 26 to 12 over a period of 15 years.

226 Under the Ecclesiastical Offices (Age Limit) Measure 1975, bishops retire from their sees, and therefore from membership of the House, at age 70. Retired bishops are entitled to use the facilities of the House available to members of the House outside the Chamber.
227 Ecclesiastical Commissioners Act 1847, s 2; Bishoprics Act 1878, s 5.
228 For a valuable account of religious representation in the House of Lords, see C Smith [2002] PL 674, and A Harlow, F Cranmer and N Doe [2008] PL 490.