I've seen claims that during the 116th congress, Senator Kamala Harris voted with Trump's position more than two percentage points less often (11.1% compared to 13.6%) than Senator Bernie Sanders, who is often considered to be one of the most liberal Senators. Is this statement correct?

538 actually has whole analysis devoted to this, showing both how often a member votes in line with Trump's position and comparing that to Trump's vote share in their district.

According to their analysis, Kamala Harris votes in line with Trump's position 16.2% of the time, which is slightly higher than Bernie Sanders 14.2%.

In the Senate, Kristin Gillibrand has the lowest percentage with 12.2%. The highest Trump score is a tie between Kelly Loeffler and Jeff Sessions with 100% from their time in office. Of Senators who were in office for Trump's whole term, there's a 3-way tie between John Cornyn (R-TX), John Hoeven (R-ND) and Pat Roberts (R-KS) with 95.1%

Expanding on divibisan's identification of the source of the data which motivated this question, the percentages in the original post are correct when limited to votes in the 116th Congress.

Below is a graph illustrating how each Senator's 'Trump Score' has changed over time. We can see both of their scores shoot up in early February '19, as they both opposed a measure to disapprove of the withdrawal of U.S. forces from Afghanistan and Syria. This then declines over time, and we see a long flat period for both between July '19 and January '20. During this period, Harris was present for two of the votes on the measures recorded by FiveThirtyEight, so her score decreases.

The spike at the end of the graph, in March '20, relates to the two measures on coronavirus assistance, both of which were supported by both Senators. First, the Families First Coronavirus Response Act, and secondly, the CARES Act.

This somewhat illustrates how this sort of statistic can be misleading - both Sanders and Harris have voted with Trump's position the same number of times, on exactly the same measures - but as Sanders was absent for some votes, he is deemed to have a higher 'Trump Score'. 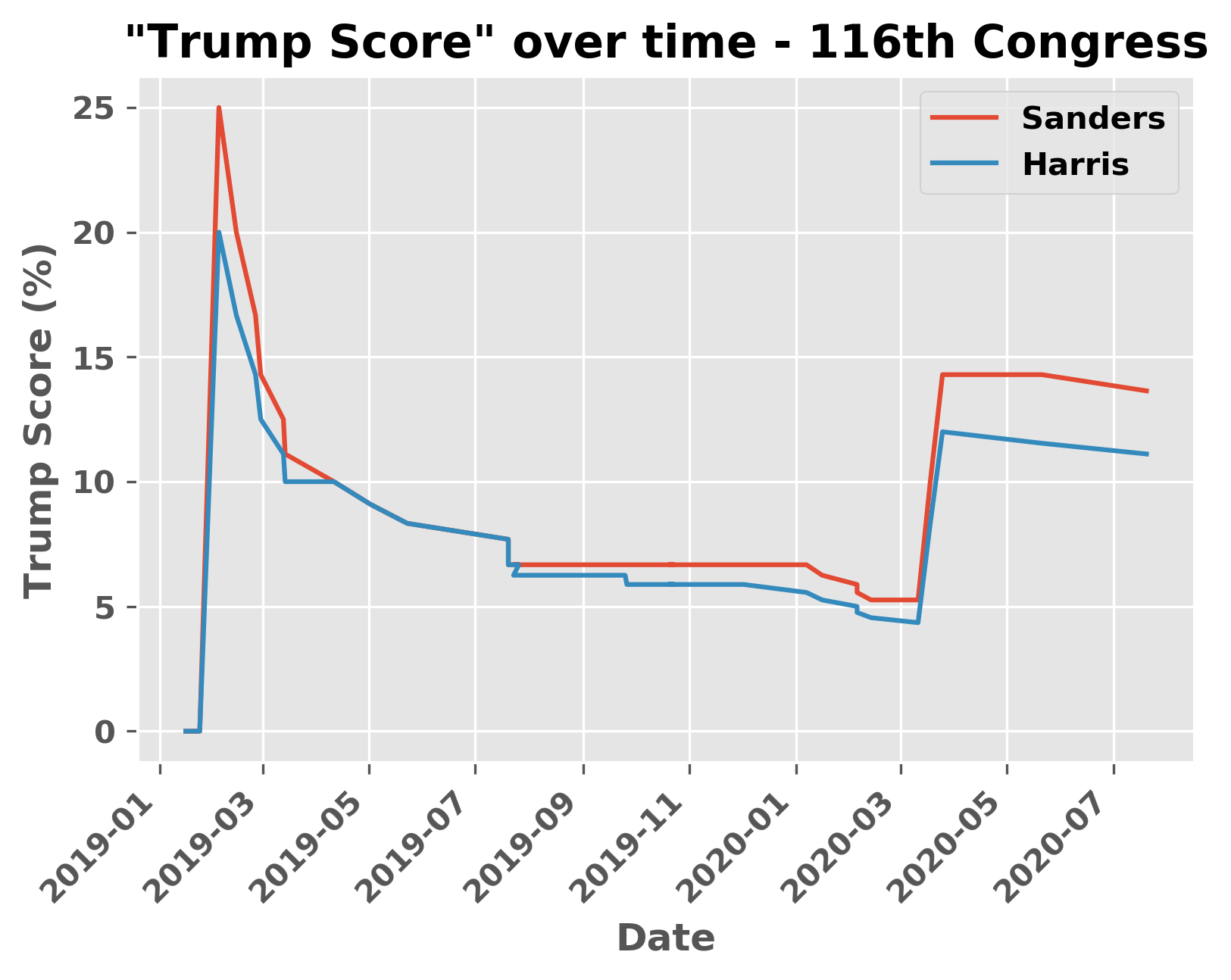 Without knowing the source of your image or how the numbers were compiled, it's impossible to say, exactly.

However, do note that GovTrack does rate Harris as the most "liberal" Senator in 2019:

Note that Harris is "0.02" units "more liberal" than Sanders, which seems consistent with the data from your image.

Not the answer you're looking for? Browse other questions tagged united-states senate bernie-sanders voting-records kamala-harris .

11
Can Bernie Sanders be a write-in candidate if he does not win the primaries?
54
What does the POTUS do, exactly?
5
What did Bernie Sanders do with all the cash from his 2016 campaign?
6
Was the Democratic vote less efficient in 2018 than in 2016?
29
Why dodge a question about your party's position (e.g. Kamala Harris on “packing the court” during VP debate) instead of saying it's undecided?
8
Why is Republican targeted messaging around socialism effective among immigrants from socialist or formerly socialist countries?