What was the postal voting turnout in the US in the federal elections prior to 2020?

What proportion of US voters used postal voting in the 2018 federal elections? If possible, what was the corresponding figure for the previous few elections, in 2016 and earlier?

The 2018 Election Administration and Voting Survey - conducted by the Election Assistance Commission - reports this data. A ballot cast by mail by their definition is the sum of all civilian by-mail ballots, ballots cast under the Uniformed and Overseas Citizens Absentee Voting Act (UOCAVA), and Federal Write-In Absentee Ballots (FWAB). The figure they arrive at is that approximately 25.8% of election participants cast postal ballots in 2018. This is an increase from 23.7% in 2016, 7.8% in 2014, 5.6% in 2012, and 4.7% in 2010.

States reported a total 31,058,968 persons casting ballots by mail in the 2018 general elections, which represents 25.8 percent of election participants.26 Three states experienced especially large increases in the use of by-mail voting between 2014 and 2018. By-mail balloting in Montana rose from 60.2 percent to 73.4 percent. In California, by-mail balloting increased from 53.3 percent to 69.1 percent, and in Utah it increased from 50.5 percent to 87.6 percent.27 Some of the increases in California and Utah are due to some local jurisdictions adopting an all-vote-by-mail system.28 States reported transmitting 21,632,297 by-mail ballots to voters on a permanent by-mail ballot voter registration list in the 2018 elections.

26: This calculation combines participants who were reported as voting with a domestic civilian by-mail ballot, a UOCAVA ballot or FWAB, or by-mail in an all-vote-by-mail jurisdiction in item F1 of the EAVS.
27: Utah’s reported by-mail voting rate in 2014 does not include UOCAVA voters, as Utah did not report UOCAVA voting in item F1 of EAVS in 2014.
28: Thirty-eight of California’s 58 counties and 28 of Utah’s 29 counties reported data on voters who cast ballots in a voteby-mail precinct.

The report also contains a handy map to more precisely pinpoint the popularity of by-mail ballots. 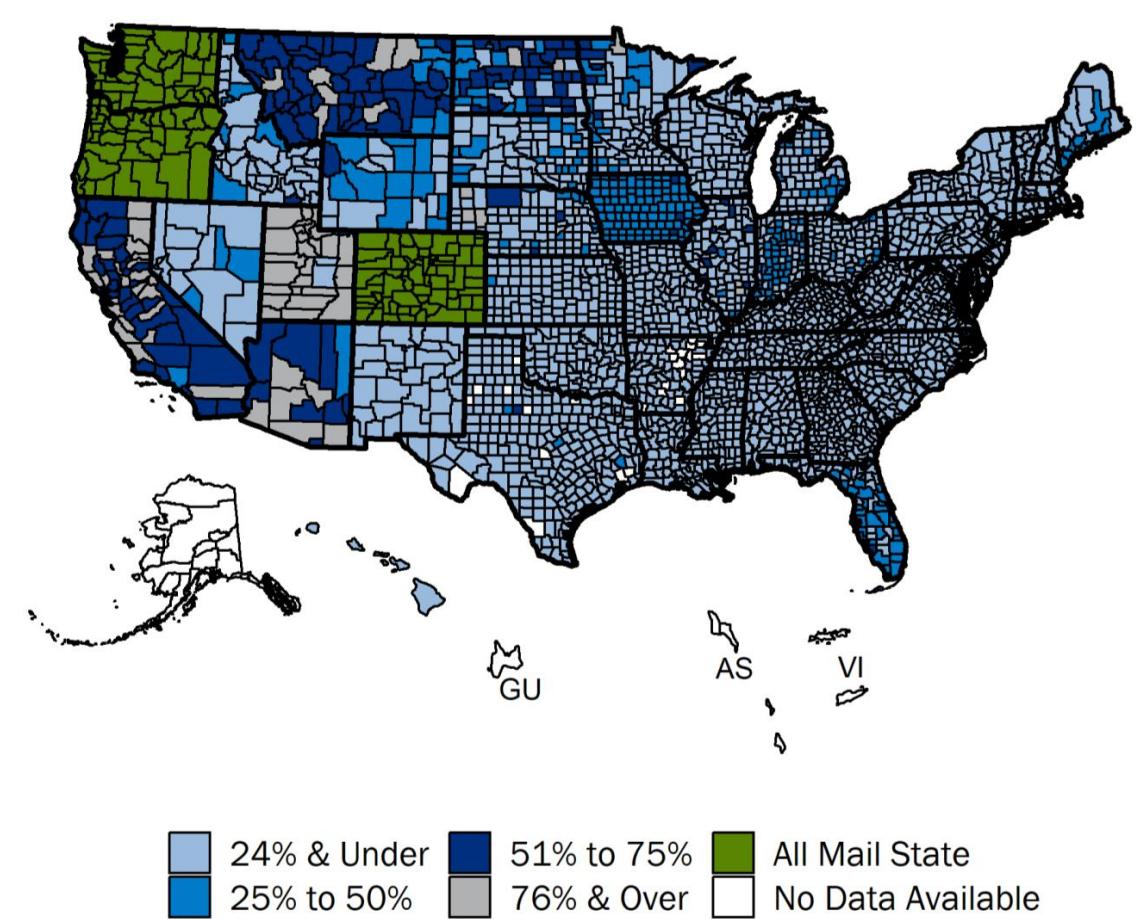 Not the answer you're looking for? Browse other questions tagged united-states election statistics vote-by-mail .

9
What was the lowest known voter participation rate?
5
Statistics on Australian non-voters who are actually sanctioned (fined or otherwise punished)
6
Why is the voter turnout at EU level so low compared to national elections?
19
What election rules and voting rights are guaranteed by the US Constitution?
0
Why did the turnout rise so much in the governor's elections in some states?
12
What happens if not all ballots cast by mail arrive in time to be counted for the November elections?
1
What percentage of voters lived in a precinct where Republican house candidate got less than 5% of the vote in 2016 and 2018?
3
What were the wait times at polling places in other elections in 2020?
9
How many mail-in votes were disqualified for failing the signature match test at the US presidential elections in 2020?
16
What is a common failure rate in postal voting?