In the 538 Election Forecast, what is the difference between States that are: "the closest races" and "close to the tipping point"?

In 538's Election Forecast, states are highlighted as either having "the closest races" or being "close to the tipping point". What is the difference between these two categories? 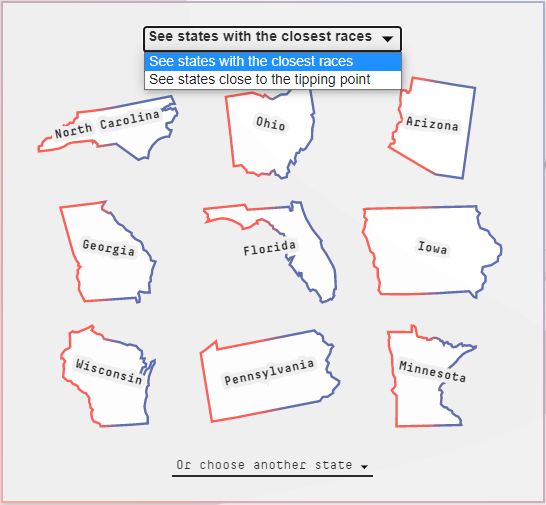 To demonstrate the difference, I'm going to use the result of the 2008 election as an example.

A close race is a race where the difference between the two candidates is small. In 2008, Missouri was the closest race (in percentage point terms), which McCain won by 0.14%. As we know, though, Obama didn't need Missouri to win that election.

The tipping point state is one where, when you sort the states from most Democratic to most Republican, gives the winning candidate their 270th electoral vote. In 2008, this state would have been Colorado; even though Obama won that state by nearly 9%, that's the state that gave him the win in the end.

There are some nuances particular to FiveThirtyEight's model. Their dashboard works by simulating a large number of elections, and then presents a sample of 100 of these simulations.

The states which are designated as being close to the 'tipping point', are calculated by lining up the states in order of victory margin in each simulation. The state which takes the winning candidate over 270 electoral votes is the tipping point state for that election. After all the simulations are complete, the states are given scores based on the percentage of simulations in which they were the tipping point state. In their current model, the states which gained this title most frequently are Pennsylvania and Florida (both 22.3%), and Wisconsin (10.8%).

Not the answer you're looking for? Browse other questions tagged united-states presidential-election statistics polling .

10
What is the difference between the UK and the US regarding their states?
18
Why do election predictions by FiveThirtyEight and Predictwise differ so much?
11
What made the popular vote in the US presidential election so close?
2
What is the difference between war powers and emergency powers?
3
What was the correlation between a US state's Hispanic population and two party vote share for Hillary Clinton?
9
How can election winners of states be confirmed, although the remaining uncounted votes are more than the difference in votes?
16
Why is there such a large difference between the US population and electorate?
3
Correlation between 538's urbanization index and vote margin 2020?
5
What are the major policy differences between Clinton and Biden?