Why did China target Australia for economic sanctions?

China initiated an anti-dumping investigation against Australian wine. Previously, China had increased tariffs on Australian barley. Why did China do this? Is there merit to this claim?

It's because they previously saw Australia as a weak link in the Western democratic alliance, and are not happy that they are now firmly siding with the U.S. and other Five Eyes.

Australia has long been open to Chinese investment and immigration, and until recently had remained, if not neutral, at least moderate in their stance on issues such as sovereignty of the South China Sea.

However, over the last couple of years, Australia has carried out a campaign against what they see as undue political and economic influence. For example, they have recently passed a new law to prevent foreign political interference, and launched reviews into foreign interference on university campuses. During the COVID outbreak, Australia called for an investigation into the origins of coronavirus, which China interpreted as a frontal attack.

While many in the West may consider Australia's actions quite reasonable, China has correctly noted that it marks a inflection point in relations, with Australia changing from being relatively "compliant" with regard to political matters in return for generous trade privileges, to being firmly within the multi-lateral consensus of the Five Eyes. From their perspective, it is a big change.

According to a piece on The Conversation, "China used anti-dumping rules against us because what goes around comes around":

Australia was among the first wave of countries to adopt anti-dumping legislation alongside Canada, New Zealand, the United States and Britain in the early years of the 20th Century.

It remains a prolific user of the system compared to other countries, with an outsized number of measures imposed against imports from one country, China, and imports of one product, steel.

In other words, China is targeting Australia with anti-dumping measures because Australia has long targeted China. Or at least, this is clearly an important part of the reason.

The article includes the following data, which shows that China is targeted more than any other country by Australia's current anti-dumping measures. The original Australian government source of this data shows 17 "Dumping Measures" and 9 "Countervailing Measures" against China. 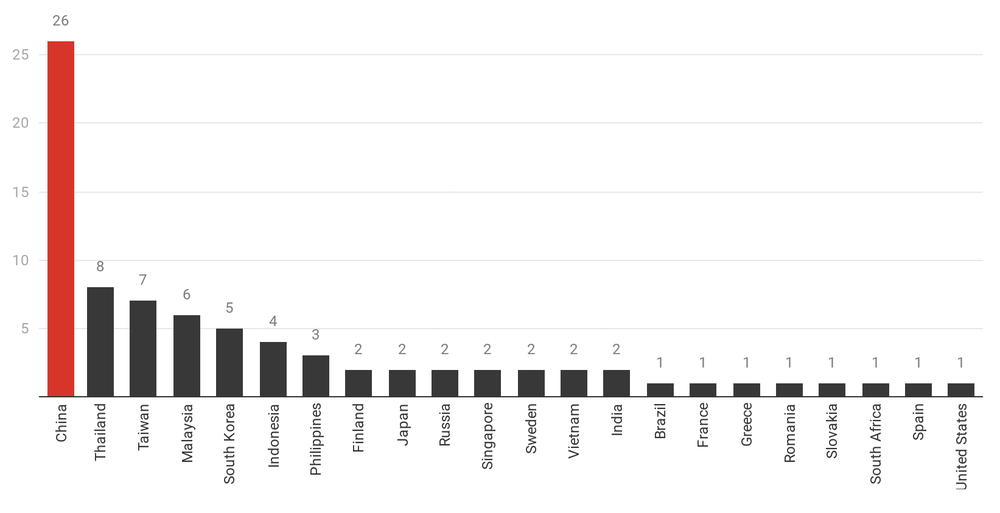 Oh, sure, Australia supported the investigation into China's initial covid handling and has been in the doghouse ever since. Why, they might even have mentioned the Uighurs! There's also been increasing Aussie unease about Chinese political activities in Australia.

(To be cynical, the Aussie PM got skewered for his position on global warming during the wildfires and might have found it politically useful to deflect attention elsewhere)

Basically, anytime someone steps on China's toes diplomatically, their coal ships have custom problems or their citizens get put in jail on trumped up charges.

This isn't a new phenomenon. Mentions of Tibet or visits to Taiwan have triggered similar coercions in the past.

The difference is that now China is big enough to matter and is on the way to surpassing US power in the next 20-30 yrs.

China's annoyance at Australia had an earlier beginning, too.

In 2009, a Chinese mineral company Minmetals was expecting to take over Ozminerals. This story on the ABC has a good overview. It would have given China a handy inside position in iron ore imports from Australia. https://www.abc.net.au/news/2009-03-27/national-security-cited-as-chinese-oz-minerals/1633314 I can't remember the detail for sure now but i think that Rio Tinto also had a hand in the matter one way or another.

The Foreign Investment Review Board blocked the deal.

This decision would have, in retrospect, surprised China, and perhaps set the first step on what would later become, as shown by the excellent comments above, a larger pathway.

Not the answer you're looking for? Browse other questions tagged china trade australia wto .

9
How did Australia wind up with a two-party system?
9
What is the historical basis for China's claim on the South China Sea?
1
How many WTO cases has the Trump administration launched (per year)?
2
What explains the timing of the U.S China trade tariffs and negotiations?
2
Why did Secretary Michael Pervan not appoint a CHO in 2018?
3
Did China have a good reason to not ban international travel during the COVID-19 lockdown when it banned travel to and out Wuhan inside of China?
6
Why did China impose the new national security law on Hong Kong now?