Why do all the red states on presidential election maps since 2004 (excluding Alaska) touch other red states?

Since the 2004 election, every state that gave the most votes to the Republican candidate was touching another state geographically that did the same. This is, of course excluding Alaska. And it is not true of blue states which usually touch each other in small regions like the Northeast, CO and NM (2008 onwards), the West. (The upper midwest was isolated in 2016 leaving just Illinois and Minnesota.) By the West I mean the three coastal states CA OR and WA. Why is this?

Democrats tend to do very well in big urban centers and poorly in rural areas. Middle america and the south don't have many big cities that completely dominate a State.

Big cities tend to be concentrated in the costal/northeast regions, so that is where Democrats do well. Conversely, middle\southern America doesn't have many big cities, so Republicans do well. This is why it is called "flyover country" by some - the places between the big cities.

In fact if you look at voting data, even in Democratic strongholds like Illinois, New York and California, rural areas tend to be heavily Republican.

Democratic-majority states are concentrated on the coasts, so they tend to have smaller numbers of neighboring states. Otherwise, this is just a matter of pure chance. I see no reason to think that there is a causal relationship between voting patterns in neighboring states.

As a general US rule, densely-packed areas that are primarily urban and which focus on end-product industry, commerce, or technology tend to lean Left. They are more cosmopolitan, more ethnically diverse, have somewhat higher average educational levels, and are more secular, all of which lead towards more sympathetic views to social justice issues. By contrast, loosely populated rural regions, which emphasize agriculture, ranching, mining, and resource industry (oil extraction, iron smelting, ore processing) tend to lean Right. They are both more religious and more socially conservative, and have little exposure to the issues involved with typically 'liberal' policies. On any level of the US political map one cares to look at, there will be islands of blue concentrated in densely populated areas, separated by oceans of red spreading through lightly populated rural regions. For instance, California is a reliably 'blue' state, but any detail of the California political map will show areas of blue around Los Angeles and the SF Bay Area, with chunks of the coast, most of the Central Valley, and all of the Eastern counties showing bright red.

Various sources have produced election maps in which the geographical size of states is adjusted to reflect the proportion of population they represent. Below are two, by Business Insider (working on a state level) and Metrocosm (working on county-level data). Note how different the maps look when adjusted for population size (the second image includes the conventional geographical depiction for reference). 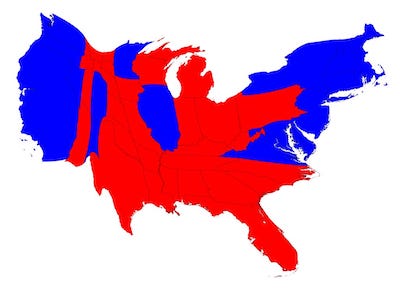