I was thinking about whether or not ideological sorting is geographically uneven. This was shown when someone said California is more Democratic but Vermont is more Liberal. 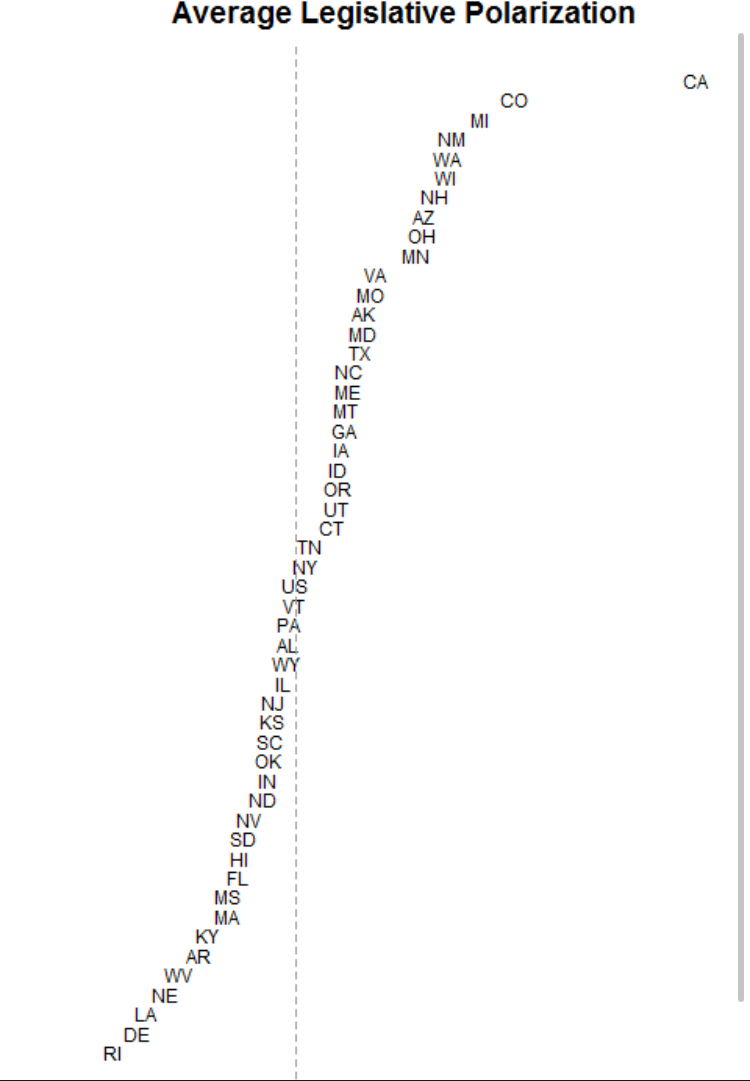 I think this has to do with the New England Republicans and Southern Democrats. This is because a lot of New England and some southeastern states are less polarized despite strongly leaning liberal and conservative respectively.

The Midwest, West, and New Hampshire (!) are all of top 10. Is the ideological sorting (liberals being Democrats and Republicans being conservatives) unevenly geographically distributed?

I think this has to do with the New England Republicans and Southern Democrats. This is because a lot of New England and some southeastern states are less polarized despite strongly leaning liberal and conservative respectively.

Your analysis isn't wrong. There are two things going on.

First, as part of "realignment" most pre-1960s New England Republicans transitioned to the Democratic party, and most pre-1960s Southern Democrats transitioned to the Republican party, but at the individual politician level not everyone has made the switch and some of the poor sorting results from people who have not kept up with the changing ideologies of the respective major political parties. In other words, there are some Rockefeller Republicans still out there that haven't yet become Democrats and some Dixiecrats that haven't yet become Republicans. This is particularly the case in places without term limits.

Second, most places with little ideological sorting are places with one dominant political party that encourages politicians on the margins to join the dominant party even if they are outside the core of the national party ideologically, and would have chosen the other party in a place with two strong political parties to serve as alternatives.

Yes, obviously. It's even more obvious when you look at particular issues, and at a finer granularity than states. For instance here's a site that has maps of opinions on a number of issues: https://www.isidewith.com/ On gun control, strong support is concentrated in a handful of urban areas. On gay marriage, strong opposition is clustered in the Deep South. And so on...

1
Is California more liberal than Vermont?

6
When allies have leaders of the same ideological orientation in power at the same time - does it improve their foreign relations?
30
What caused a massive shift in Republican ideological trajectories in the late '70s?
6
Are party fractionalization and ideological polarization independent (uncorrelated)?
4
Are public opinion and expert views of ideological distances between political parties generally consistent?
12
Is political polarization in the US geographically uneven?
2
Are liberal republicans concentrated in the Deep South?
5
Are Americans with strong ideological views less likely to be independent?
5
In the US, have COVID deaths been evenly distributed among registered party voters?