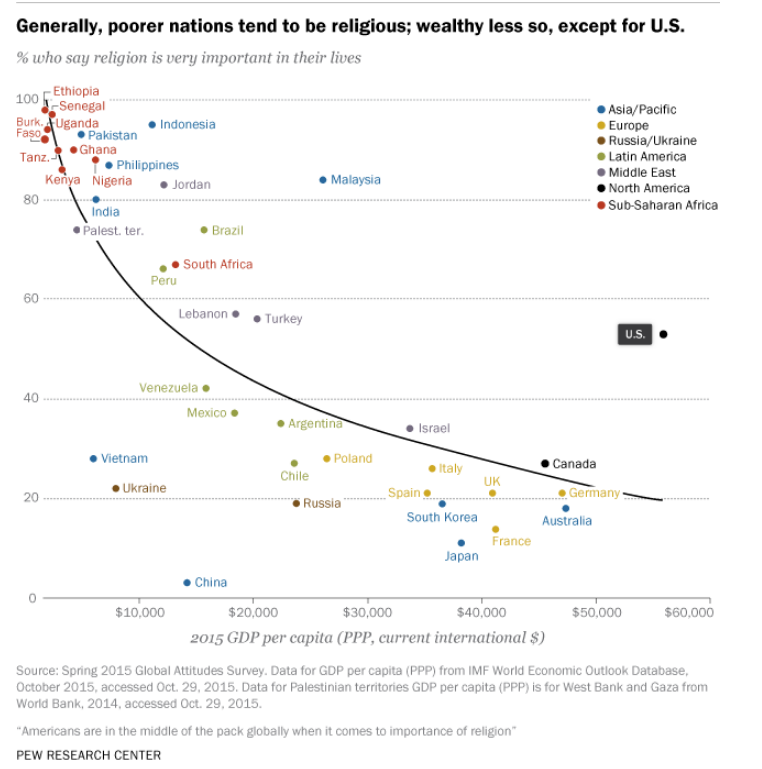 I'm wondering what causes the USA to be such a significant outlier in how heavily it stresses religion. I am aware of the Puritans and New England settlers originally came to the USA due to religious persecution, and I'm sure the fact that some of the founders were likely highly religious plays a role in the USA's continued high religiosity. However, they made up only a percentage of the original settlers, and that was many centuries ago. It seems there must be other factors in play to cause the USA to continue such a high religious focus relative to other wealthy nations. What other factors can explain why the USA is such an outlier in it's religiosity?

Not a comprehensive answer but three main reasons:

First, the United States has not had an established religion and competing religious sects for hundreds of years. This means that religious denominations in the U.S. have had to compete to survive with little room for anything that makes them less relevant to their members. In contrast, the vast majority of countries either have an established or dominant religion that received state protection for most of its history in the country, or still does have an established or predominant religion. So, in other countries there hasn't been the same need to compete which has allowed these faiths to get away with doing things that prevent them from maximally engaging their members.

Second, in direct reaction to Communist atheism, the United States during the Cold War also adopted various measures (putting "under God" in the pledge of allegiance, putting "In God We Trust" on currency, posting Ten Commandments monuments) in what courts call "ceremonial deism" in an effort to boost the link between an American identity with a sense of being religious in a way that seemed inclusive at the time when almost everyone in the U.S. was Jewish or Christian and most atheists (there were few) were in the closet for their own safety given the prevailing environment.

For example, Ireland is one of the most religious countries in Europe, in substantial part, because Catholicism provided a refuge for Irish culture in the face of Episcopalian and Presbyterian English and Scottish rulers for hundreds of years. Similarly, in most countries, the most vibrant churches are those with recent immigrants who preserve their homeland cultures at church from their new foreign homes.

Most of the denominations of Christianity in the U.S. were predominantly immigrant churches within the last two or three generations.

Most Evangelical Christians in the U.S. perceive themselves to be members of a minority culture and at the national level and with respect to economic elites this is true. So, a far larger share of Americans belong to threatened cultures which their religious involvement helps to preserve.

One of the major upward outliers, Malaysia, is like the U.S., multicultural and has multiple significant religions, and like the U.S. has a substantial immigrant population in recent historical memory (the Chinese). These factors contribute to the preservation of a threatened culture aspect.

Indonesia is predominantly Muslim but split between a very conservative and a very liberal way of living that faith that the central government was trying to suppress until quite recently.

Turkey is also predominantly Muslim but has similar tensions between a Sunni Majority and a Shiite Kurdish minority, and also between adherents of a relatively secular public life instituted by Atatruk as part of the concept of the nation, and those who want to live a more openly Islamic life.

Originally, all of Latin America had an established Roman Catholic church, but in recent times, a Protestant, predominantly Pentecostal religious minority has emerged and this minority is more vibrant in Brazil than in many other Latin American countries. This may help explain its high end outlier shift.

The low side outliers like China, Japan and South Korea are all extraordinarily homogeneous culturally, and in China and Vietnam, for example, the official state policy of the Communist Party is atheism, so acknowledging religion is important to you (even if true) would be a dangerous way to provide an answer to a stranger conducting a survey. It also makes it troublesome and dangerous to try to be religious unless you really, really care. Also, the notion of what it means for religion to be important in your life doesn't necessarily translate well from an East Asian religion context to a question that was created with a Abrahamic religion (i.e. Jewish, Christian or Muslim) model as its court reference point.

In Russia, Poland and Ukraine, there was likewise a history of official state atheism in the Communist era, and there are few religiously diverse non-Slavic immigrants, so again, religion was artificially dampened for a long time and also doesn't preserve a threatened culture even now.

The GPD per capita number used on the X axis of the chart may be a flawed indicator of the poverty measurement the study is trying to make.

In many African countries, GPD per capita is artificially low because a large share of all production takes place in the non-monetary subsistence farming and do it yourself home production sectors that aren't included very accurately in GDP totals and with adjustments for that, the entire curve would move up more steeply at low incomes and the data points would be more tightly clustered.

For data points in Indonesia and Jordan, in contrast, GDP per capita may overstate income relevant to the purpose of predicting how religious the general population is, because both economies receive lots of GDP in the form of oil and gas revenues, much of which are siphoned out of country by oil and gas production companies or in the case of Jordan, to investments and the royal family, in both cases putting a significant share of the GDP out of the rich of even the affluent native people in those countries.

Not the answer you're looking for? Browse other questions tagged united-states history religion statistics .

66
Why is the US so religious compared to other Western democracies?

3
Is religious discrimination legal in public in the USA?
14
Why Does USA Have So Many Religious References?
19
Why do the Dutch Euro coins have a religious inscription on their edge?
66
Why is the US so religious compared to other Western democracies?
6
Do other nations consider all USA politics to be conservative, and if so why?
10
Do other countries provide police the same degree of immunity that USA police officers have?
2
Why didn't the USA first evacuate civilians then focus on evacuating their army from Afghanistan?
29
Why are White Americans in the Southern region of the USA much more conservative and Republican than elsewhere?
5
Does public spending involving religious organizations (i.e. the Church) follow the same transparency rules as for other public spending?