How does turnout in US elections compare across states?

It’s well known that many US states vote in a very predictable way in national elections (e.g. Arkansas has a Partisan Voting Index (PVI) of R+15, two Republican senators, an all-Republican House delegation and a Republican governor, while Hawaii has a PVI of D+18, two Democratic senators, an all-Democratic House and a Democratic governor) while others are considered swing states that might vote either way (e.g. Pennsylvania with an even PVI, one senator of each party and an evenly split House delegation).

I’m curious how these differences affect the turnout in nationwide elections. Naively, one might expect swing states to consistently have a higher turnout as every vote may matter while in one-sided states many voters may think that their vote does not matter. However, I believe there are usually many different elections happening at the same time on Election Day so this simplistic view may not hold as other (local or district) elections may draw voters in.

So how does turnout in national (presidential, Senate and maybe House) elections compare across states? Does turnout correlate with any political indicators?

I'm sure someone will come along with a more sophisticated analysis, but here's a quick an dirty one for now, and it does suggest a correlation between high turnout and low partisanship.

Looking at the data from the US Elections Project I picked out the list of states which had both over 64% turnout in 2012 and over 45% turnout in 2014 (measured as ballots for highest office as a share of eligible population). For those states, I took the Cook index from Wikipedia (which are for 2012-2016).

Looking at the correlation between Cook PVI & average difference from the national turnout in national elections over the 2012-2018 period, we can plot the graph below, which clearly shows the trend identified in the question. On a very rough basis, the trend line shows that every PVI point corresponds to a reduction in turnout of 0.65 pp against the national average turnout. The Pearson correlation coefficient is around -0.46, indicating a strong negative correlation between the two. Red points indicate states with Republican PVIs, blue points correspond to states with Democratic PVIs. 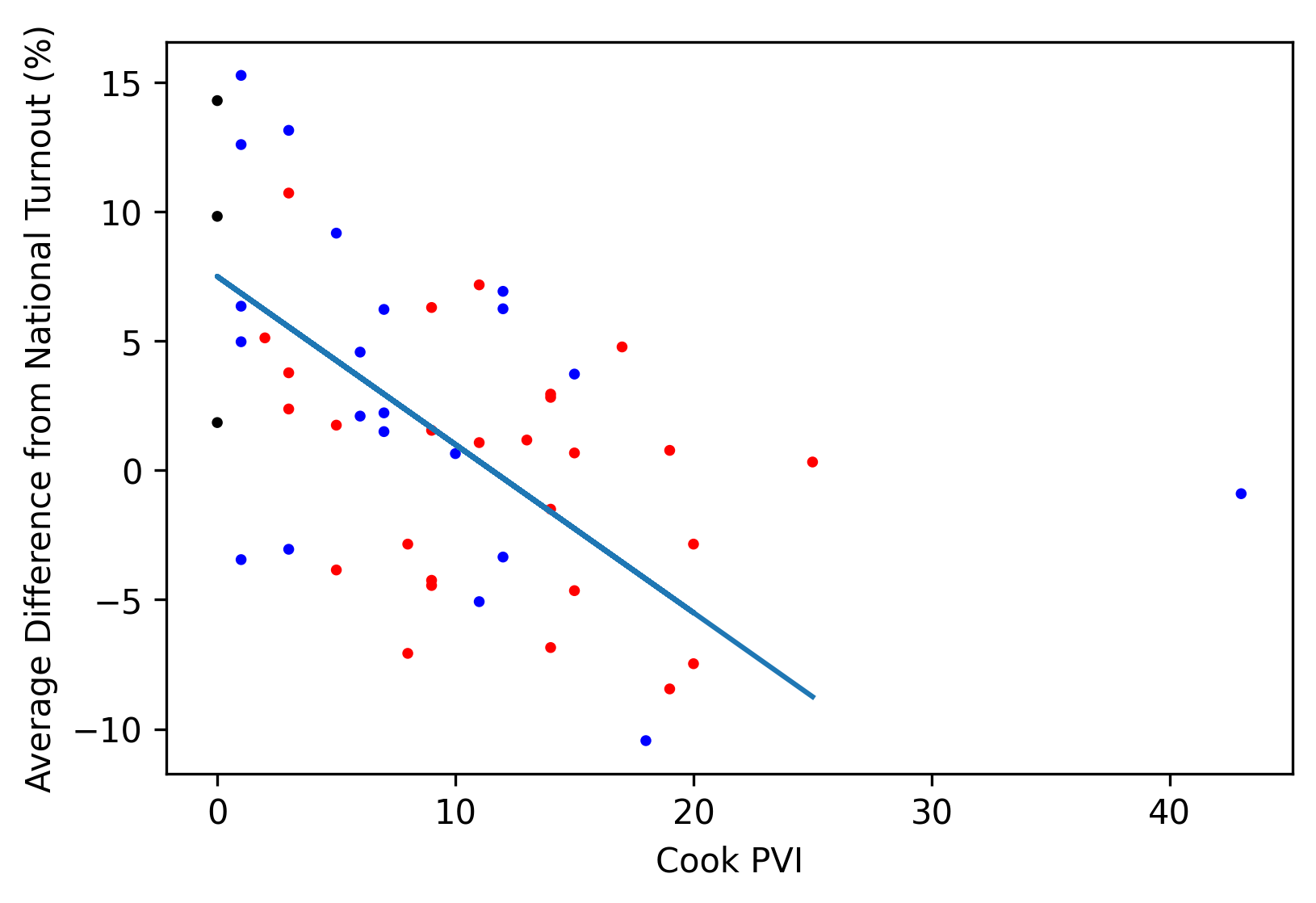 If we exclude the outlier of DC, with its D+43 PVI, and plot the points on scale where Democratic PVIs are negative, we can fit a polynomial to the data which leads us to similar conclusions. 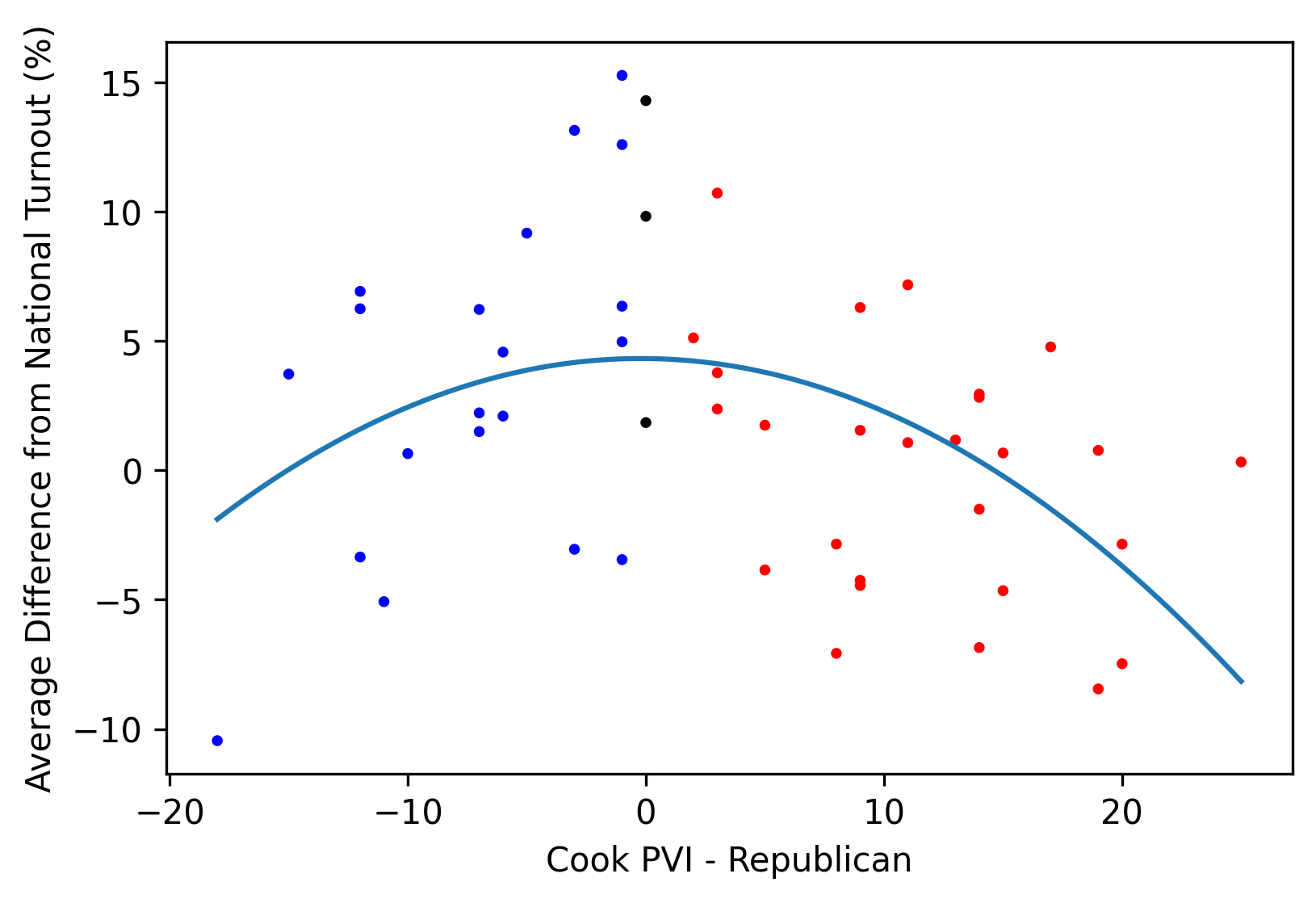 13
In first-past-the-post/winner-takes-all elections, is turnout higher in marginal seats / swing states?
9
How does the discrepancy between exit polls and results in recent US elections compare to pre-electronic machine margins?
35
Why did Wisconsin Republicans oppose postponing the April 7th election despite COVID-19 shutting down nearly all polling places?
3
How did Black Americans vote in presidential elections prior to 1936?
1
Is California more liberal than Vermont?
6
Which party actually caused the 2016 presidential election swing?
2
Why does there seem to be some sort of drop-off with young voters support of Republicans that accompanies lower turnout elections?
3
Why was 2020 a depolarization election?