I am interested in what factors are correlated with ticket-splitting in the United States, particularly whether voters with low information are more likely to vote for a split-ticket.

The motivation for this question is noticing that certain states in New England, for example, Massachusetts, regularly elect Republican governors despite their entire federal congressional delegation being composed of Democrats, and 50% of voters in the state identifying as independents. This is in contrast to states such as Utah, Oklahoma or Wyoming, where this disparity has not been observed since 2010.

I have read on Wikipedia that low information voters are more likely to vote for a split ticket. Is there any available data or academic analysis which confirms this?

This is not an attack question. I just want to know if, in America, people who vote for different parties at the same election are less informed.

We can now look at how these different sets of respondents fared in the questions which sought to evaluate their political awareness. These involved identifying which party held the majority of seats in the Senate, the House of Representatives, their own state's upper & lower legislative chambers, and the party of their Governor.

The results are summarised below. I found that the result suggested in the question held - respondents who voted for a split ticket were generally a lot worse at answering the political knowledge questions posed in the survey than those who voted for a straight ticket, no matter whether that ticket was Republican or Democratic.

Bear in mind the limitations of using these questions in particular - a voter may not know much about the partisan make-up of Congress, but may be more aware of a local race or local issues which inform their choice to vote for a split ticket. 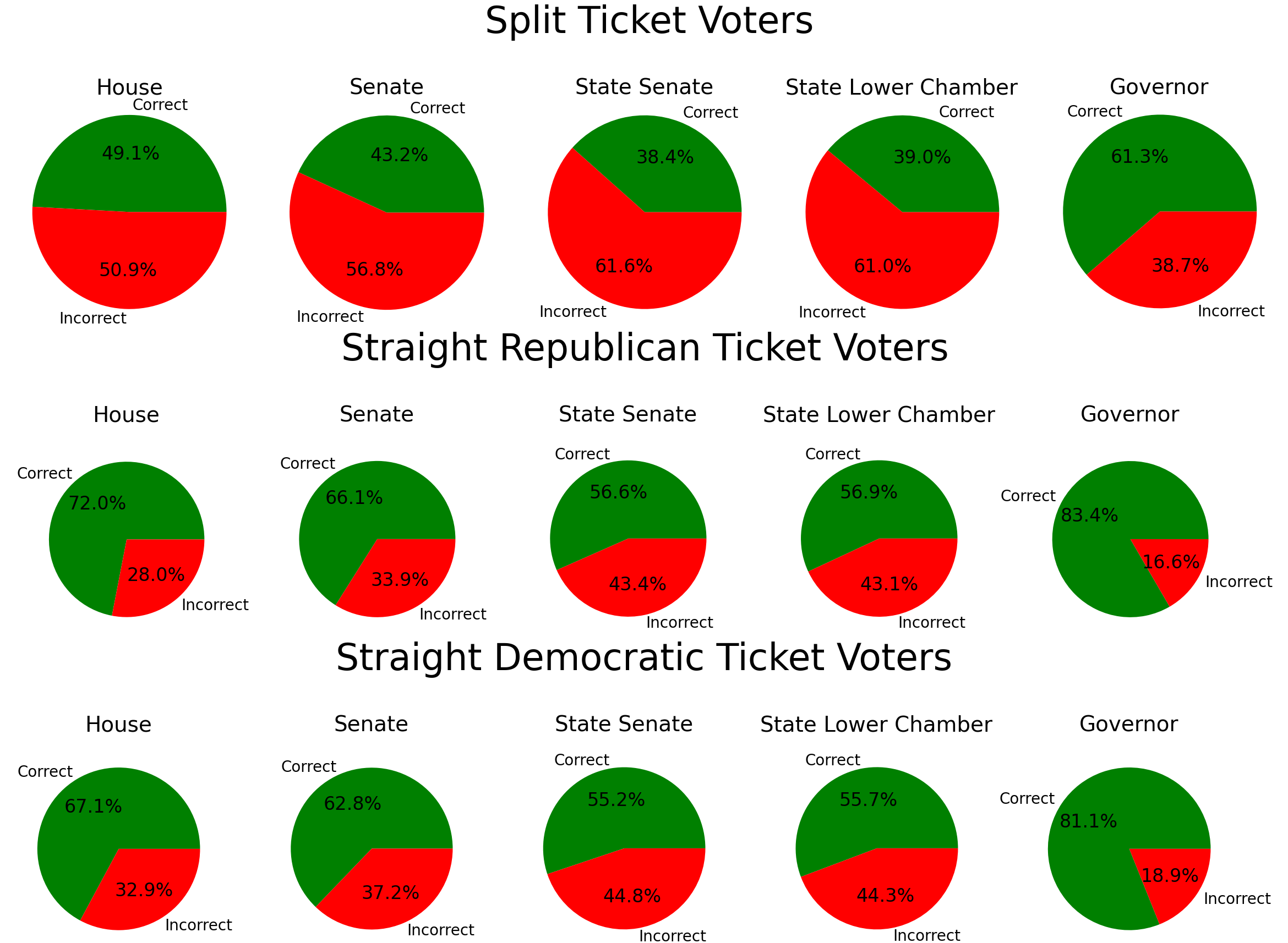 It's better to ask about about what strategies or rubrics people use when choosing a candidate than about a specific outcome like ticket-splitting. Ticket-splitting can be a strategy — a deliberate choice with the intention of creating a power-balance between party interests — but more often it's a result of the application of different rubrics, some of which aren't particularly conscious or deliberate. Trust and familiarity are often important considerations (which is why incumbents generally have a distinct advantage in elections), but a hodgepodge of different factors can have significant impacts: things like a perception of weakness or failure, a particularly salient policy issue, ongoing civic frustrations, etc.

New England is an interesting case, because for the most part New England is socially liberal and fiscally conservative. Social liberalism tends to be more salient in national elections, where New Englanders see themselves in a 'Yankee' perspective, opposing the entrenched social illiberalism of the deep South and Southwest. But for state and local elections they tend to be thrifty and frugal, and align more with moderate conservative worldviews. Think of New Englanders as being motivated by the spirit of Ben Franklin, and the sometimes odd politics of the region make more sense.

12
Are Minimum Wage laws correlated with higher poverty levels?
2
When is each US state likely to declare its result in the 2016 US presidential election?
9
How tightly is the rural/urban population ratio correlated with a state's red/blue status?
1
Is California more liberal than Vermont?
1
What caused (or is strongly correlated with) the Democrat swing (relative to 1994) in the 2018 Massachusetts gubernatorial election?
3
Is ticket splitting among nonwhite Democratic voters particularly uncommon?
6
Is splitting states to rebalance the senate really a viable strategy for the Democratic party?