What was attributed to Trump's narrower margin of victory in Texas compared to Romney?

Did Clinton come closer to winning it because of Hispanic turnout? Vote flipping? Or a combination of those?

There was a question that is kind of the opposite here: Which party actually caused the 2016 presidential election swing?

In fact, the official exit poll, as well as some post-election analyses of the state seem to indicate that - rather than Latino voters turning out to vote against Trump - he actually performed better with that demographic than Romney. FiveThirtyEight argues:

In the lead-up to the election, there was a lot of talk about how Latinos would turn out in record numbers to stop Donald Trump. But not only did Trump end up winning, exit polls also indicated that he won 29 percent of the Latino vote — better than Mitt Romney had done four years earlier. That has sparked a heated debate among pollsters and advocacy groups over whether the exit polls can be trusted.

No one doubts that Clinton won handily among Latinos. But the scale of that victory matters. Latino leaders — most of whom supported Clinton — want to argue that their constituents punished Trump for his policies on immigration and other issues, more so than they did Mitt Romney in 2012. Trump wants to be able to claim as broad a mandate as possible. And in the longer term, Latinos are one of the fastest-growing segments of the electorate, and Democrats are counting on their support to retake the presidency in 2020. But if Trump, who said many Mexican immigrants are “rapists” and questioned the impartiality of a Mexican-American judge, basically equalled Romney’s performance among Latinos — Trump won 29 percent according to exit polls, and Romney won 27 percent — that suggests that Republicans might be able to make gains in the future, or at least prevent Democrats from winning over a larger share of that voting population.

While these exit polls have been criticised as inaccurate, the analysis presented by David Byler, Chief Elections Analyst at the Washington Examiner, agrees, stating:

A shift in the Hispanic vote might be part of the story, but there’s still some disagreement among experts on this issue. Exit polls, pre-election polling, county-level results and data from the Cooperative Congressional Election Studies all suggest that Trump performed roughly as well (or maybe better) than Mitt Romney with Hispanic/Latino voters nationally. And the Griffin-Teixeira-Halpin found little difference between Obama’s and Clinton’s margin with Hispanics in Texas specifically. In other words, there’s some evidence that Texas Hispanics (who, according to estimates by the New York Times’ Upshot, already voted more Republican than Hispanics in states like California in 2012) might not have shifted far to the left in 2016.

Instead, he presents a different explanation - the shift among college-educated whites in Texas. This demographic has been looked at by the Pew Research Center, which found "the widest educational gap in partisan identification and leaning seen at any point in more than two decades of Pew Research Center surveys".

These overall patterns in education and partisanship are particularly pronounced among white voters. While the GOP has held significant advantages over the Democratic Party among white college graduates without postgraduate experience over much of the past two decades, these voters are divided in their partisanship today. 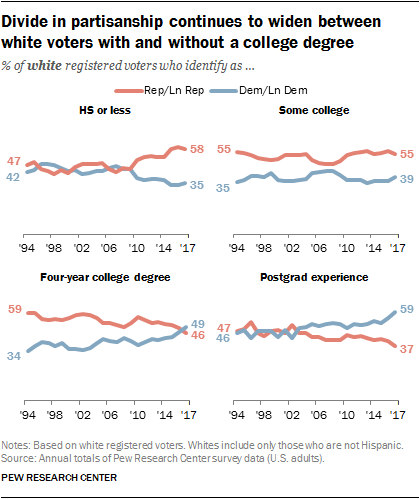 Analysis from the Center for American Progress suggests that this was a significant contributor in Texas:

So in conclusion, the increasing Latino population may have been a factor, but many post-election analyses suggest that a greater factor is the shift of white, college-educated voters away from the Republican party & towards the Democrats.

Not the answer you're looking for? Browse other questions tagged united-states donald-trump presidential-election statistics texas .

6
Was the Democratic vote less efficient in 2018 than in 2016?
6
Which party actually caused the 2016 presidential election swing?
0
Historical record of Senate primary vote total predicting statewide presidential result
1
In which congressional districts were there more votes for the Democratic candidate in 2018 than in 2016?
2
How did Joe Manchin, a Democrat, get elected as governor and U.S. senator in West Virginia?
3
Why was 2020 a depolarization election?
3
What is the correlation between swing and change in votes cast from the 2016 to 2020 US presidential elections among major parties?
17
What explains Trump's gains with Latino voters in the 2020 US presidential election?