Why does the US want Indo-Pacific Nations to become something such as NATO?

I am aware of the US-China Conflict on trade and further on and I am kind of being remembered of the cold war, the battle between the US and the USSR. NATO (North Atlantic Treaty Organisation) was formed to protect Western World from the Soviet Union. Now the US wants to form an alliance with Indo-Pacific Nations to protect themselves and other nations from China. Is this the only main reason or is there more to be included? I am grateful for every help.

Disclaimer: The following is my own perspective.

China is rising as its manufacturing machine has become unstoppable. It is speculated that China will economically and militarily surpass the USA by 2050.

Now, the USA, the world's only remaining superpower, doesn't want to be toppled. So, what is the solution to its China problem?

Regarding the #2, if the USA can goad China into a proxy war, two things will happen:

Now, in order to do these things, the USA needs allies. There are several reasons for that:

The US is used to ruling the global roost ever since the USSR collapsed and, unless it finds a way to live with China, it will find it convenient to channel local discontent and worries into an alliance to counterbalance China. Once a solid alliance exists, it ban used to either negotiate with, or contain, China. The stridency of the current POTUS in all things Chinese has very little bearing on the realpolitik behind this, only on the trust that potential allies would have in the US.

Conveniently for the US, China's increasingly assertive international behavior in recent years has been worrying many of its neighbors, who have territorial or political disputes with it:

The little green lines below? They're the limits of China's claims in the South China Sea. China's behavior in the Himalayas is also a remnant of other times. 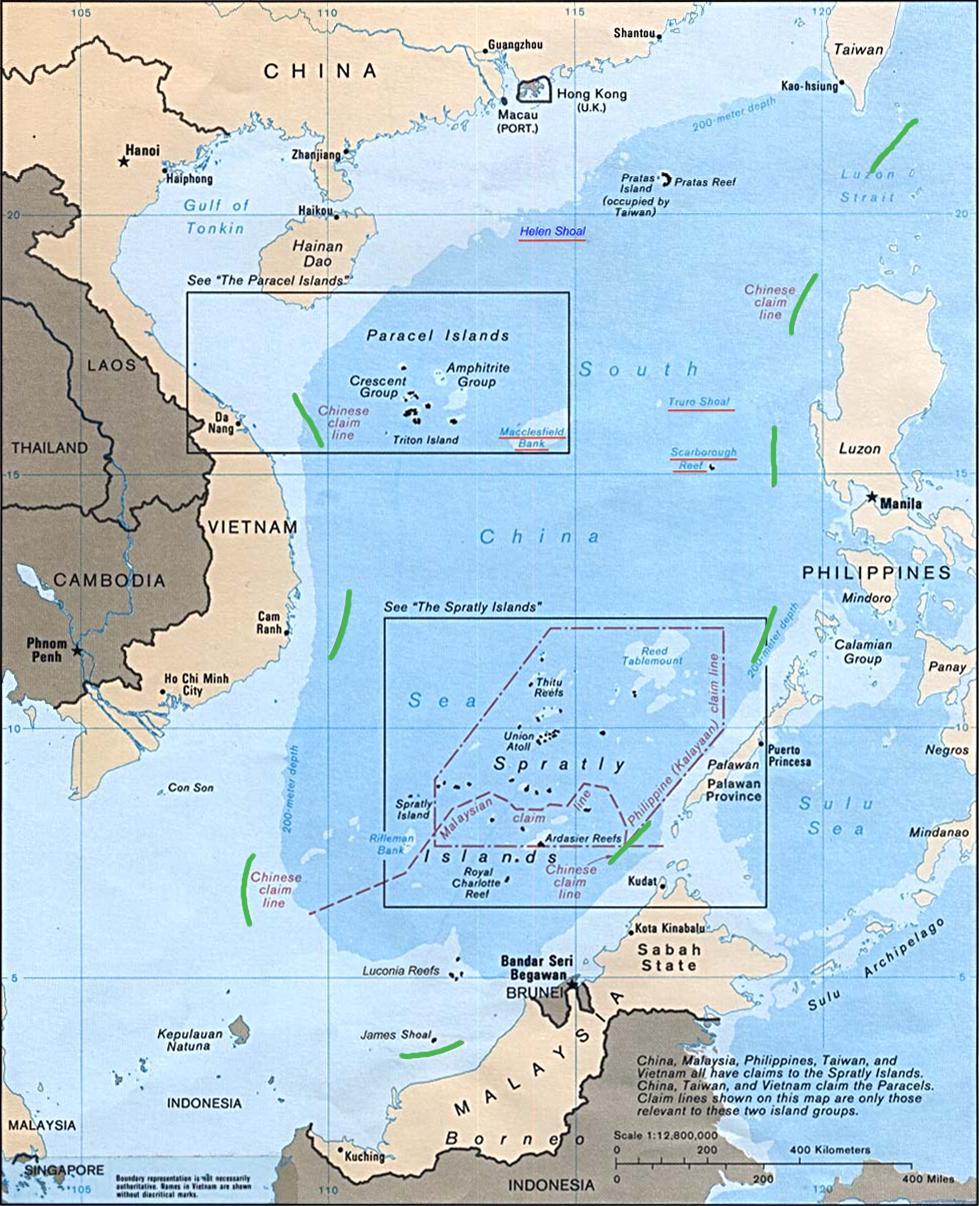 The comparisons with SEATO are rather unwarranted as the locals had little interest at the time (1954-to-1977) to get involved in America's Vietnam quagmire. ASEAN already has a solid reputation as a talking shop without much stomach for actual defense so it in no way can serve as an equivalent to NATO.

If worse comes to worse and China's behavior ends up justifying another Cold War, then alliances and containment are the way to go because the US, on its own, won't manage it. China is an entirely different kettle of fish than the USSR, not least because their only real link to Communism is the insistence on a one-party state without free elections and with censorship.

Note that, in my opinion at least, China eventually superseding the US militarily is not ground for containment on its own, it's whether they intend to behave as a responsible member of the international community and, to a lesser extent, whether they oppress their own population or not. China circa 2010 looked a lot better bet than China in 2020 in that regard.

Now, whether the US will manage to do get an alliance going under the current administration is entirely another question. I assume everyone will avoid committing too much one way or another until the 2020 US elections are over.

Not the answer you're looking for? Browse other questions tagged united-states international-relations china international nato .

8
Why was the 2% threshold specifically chosen as the target for NATO spending?
1
Why does the subject of 2% of GDP for NATO became so important in 2017?
1
Why is having a NATO missile-defense launch system such a big deal for Russia?
24
Why does Germany have such a rather small defense budget?
11
Why does DC want to become a new state rather than merging into Maryland?
5
What does the EU want from China, more precisely, as Charles Michel sees it?
10
Ukraine and the North Atlantic Treaty Organization (NATO)
6
Why would the U.S. exclude Europe from the new Indo-Pacific security alliance?