Why do veterans skew right in the US?

I know the military is supposed to be apolitical to a certain degree. But I have found a Pew poll saying that military veterans lean right. This is more pronounced when comparing younger vets to younger non-veterans.

Is the idea of serving in the military a predominantly right-wing concept? Among left-wingers that I know (including myself), none of us could imagine voluntarily serving in the army. Is this a general trend, which results in a US Army which is primarily composed of Conservatives?

The modern US military is self-selecting — a professional army, not a conscripted one — so I doubt this effect would hold true historically. But as a rule, the political Right tends to value military service as a symbol of deep patriotism. As a consequence, those who lean politically Right who want to serve the nation will be more likely to think of the military than those on the Left (who will think of such service more in terms of domestic political action), and those who lean politically Right will be even more likely to consider the military as a career, not a mere tour of duty. Further, all the branches of the military (with the exception of the 'Space Force' which is too new for this to be relevant) are deeply committed to tradition and history, commitments that foster a conservative outlook. For example, few people outside the Marines think about Tripoli and the 19th century Barbary Wars, or understand the point of a Marine Color Guard; but few Marines forget them, and it is unwise to disrespect either to a Marine's face.

In short, the modern professional military both attracts people with the kind of national pride that is typical of conservatives, and fosters conservative attitudes through its attention to tradition, history, and honor. In a way, we can see this as the flip side of why academia tends to be liberal, as academia draws in and fosters liberal attitudes.

Person serving in the military is self-selected to work in hierarchical authoritarian system (except for people who have it as a family tradition).

It is well documented that conservativism, traditionalism and authoritarianism are correlated

I refuse the notion that conservatives are more patriotic. It is about priorities, Left-leaning are more interested in the teaching instead (as a low-paid service to own country).

Also, during WW2, left-leaning resistance in most countries occupied by Axis was at least as involved in resistance as right-leaning, if not more.

In short, the conditions that drive someone to join the military are correlated to a propensity to vote right wing.

It's established that the poor are more likely to vote for a right wing party. The same can be said for a lack of education. It just so happens that the people entering the military tend to do so because it's one of their only options for either education or employment, as many of them come from small towns which have fewer opportunities compared to bigger cities, and it is certainly true that small towns tend to be more right wing than bigger cities.

As a side note, the Harvard study I linked happened to have been looking at British education and voting, not American, however I have seen many graphs, maps, and studies over the years which also show the same conclusions to hold true for American voters.

A few other observations.

Gender (as it intersects with race)

The Pew study controls for many other factors, but not for gender. Military veterans are overwhelmingly male (about 92%). There is a strong gender divide between men and women on overall liberal to conservative political inclinations at this time. Consider, for example, this hypothetical election map based upon polling results: 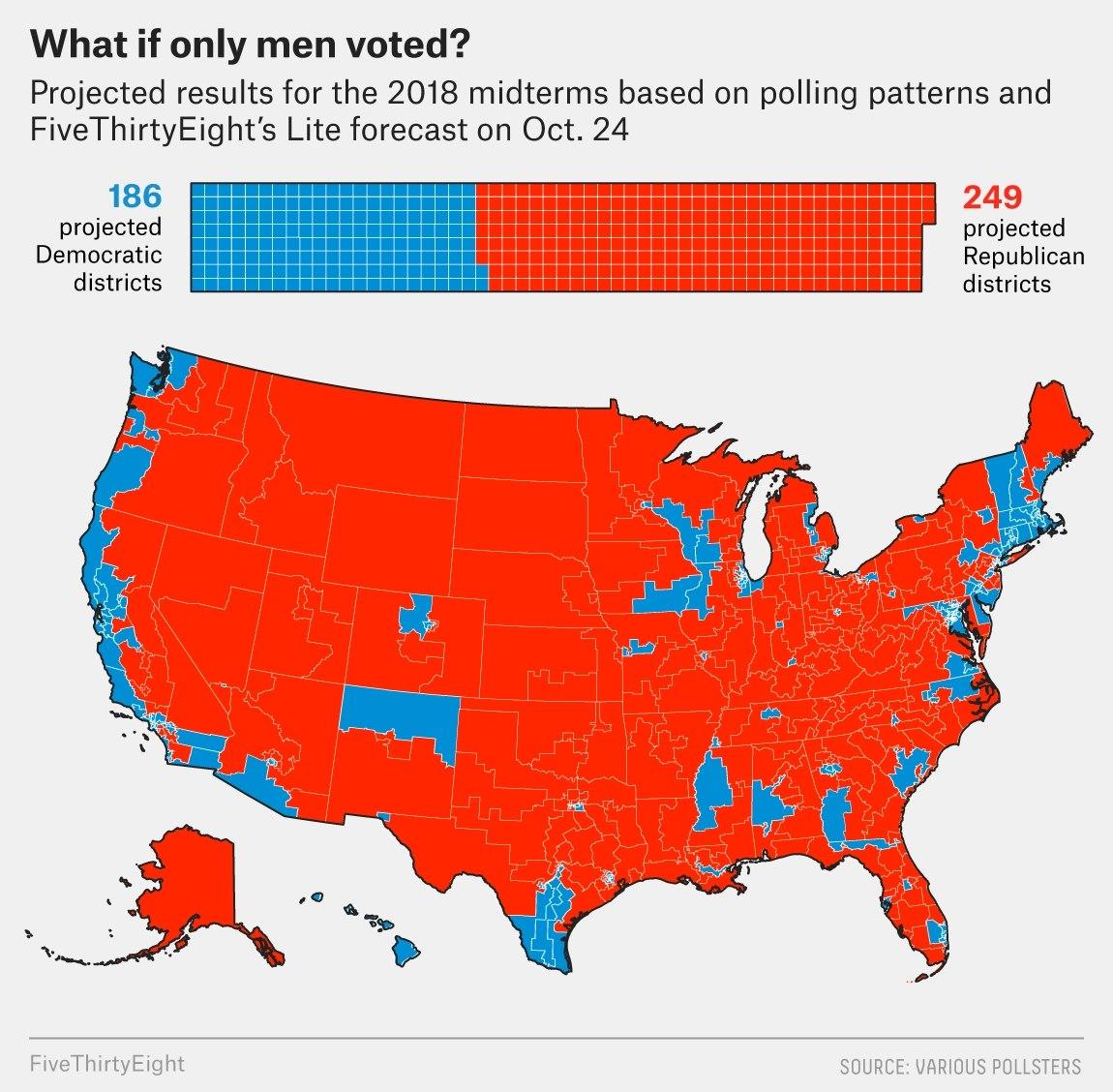 The political divide is likely to be even greater among veterans than the general public, because female veterans are disproportionately non-white relative to active duty service members as a whole, and non-white women tend to lean more strongly to the political left than white women, white men, or non-white men.

An October 2018 survey from the Military Times (whose readership and samples skew towards more senior soldiers who are more politically engaged and conservative than the military as a whole) confirms this trend: 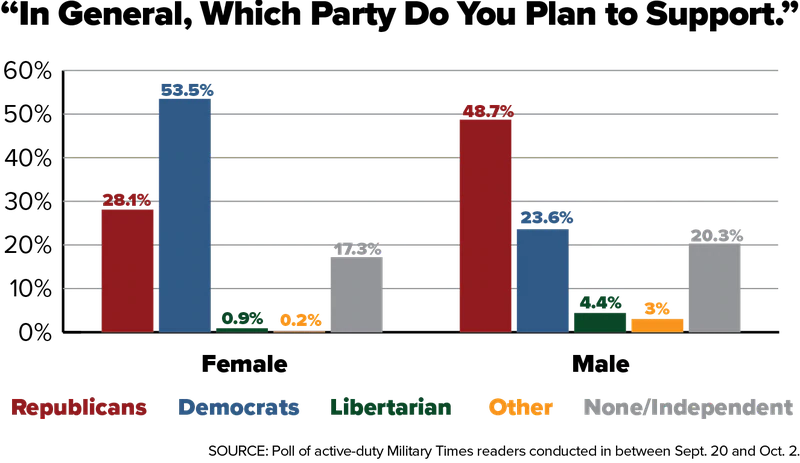 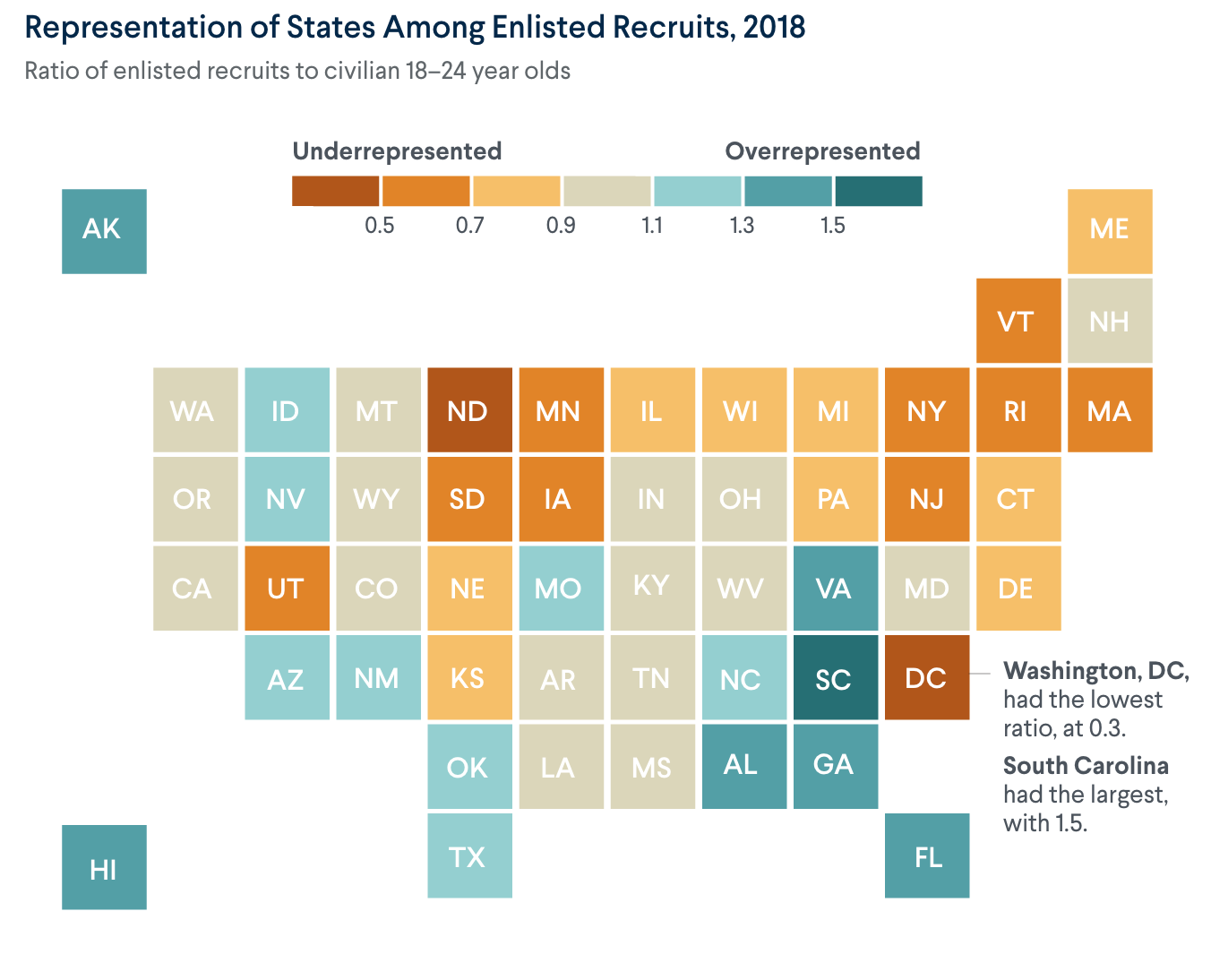 The Pew study does not note the fact that "Red states" in which the general population is more conservative overall, accounts for a disproportionately large share of volunteer military recruits, especially among soldiers who are white. This influences the politics of soldiers, and in turn, of veterans. (New Mexico and Utah are exceptions that prove the rule.)

Furthermore, and not independent of the geography issue, active duty military service people are about twice as likely to be Evangelical Christians as the general public.

Non-liturgical Christians are among the most reliably Republican and conservative demographics in the United States.

For what it is worth, the Air Force Academy, which produces a significant share of Air Force officers, is somewhat less skewed in this regard and has a much larger share of religious non-Christians than the other military services, possibly because service enlistment is significantly influenced by family history and families with a long history of military service in multiple generations, by definition largely lack a history of Air Force service.

It is worth observing that there are at least three subgroups of veterans with distinct ideological profiles.

about two-thirds of majors and higher-ranking officers identify as conservative, as previous studies found. But that tilt becomes far less pronounced when you expand the pool of respondents. That is because only 32 percent of the Army’s enlisted soldiers consider themselves conservative, while 23 percent identify as liberal and the remaining 45 percent are self-described moderates. These numbers closely mirror the ideological predilections of the civilian population.

Conscripts have historically been almost identical politically to the general population with the same age, gender, education, race, etc., despite the fact that select groups on the left (conscientious objectors) and the right (clergy) were exempted from service.

Surveys of active duty service members in the U.S. military who enlisted voluntarily have consistently shown only a slight deviation to the political right from demographically similar members of the general public.

The partisan skew of enlisted volunteers tends to be slightly more centrist in times of widespread patriotic military enlistment, such as following the 9-11 attacks, and slightly more right leaning in ordinary times.

Military officer veterans, despite making up a minority of all veterans, account for a large part of the partisan skew of military veterans after controlling for age, gender, race and education.

4
How to find out whether you're on the left or right?
13
What is the 'alt-right'?
1
What are the viewpoints and policy positions of the Israeli right wing?
18
How does the alt-right differ from the far-right?
19
Why do working class people vote for the political right?
0
Why is ideology not strongly associated with partisanship at the state level?
1
Why is the healthcare quality of the Veterans Affairs lower than that of active duty?
3
How do parliments in countries with Hemicycle shapes decide who is more left/right wing?
4
Why is the left/right spectrum defined so ambiguously? (Europe)