Why does the UK have merely 2 gas-turbine-powered aircraft carriers?

The image below from Wikimedia exhibits UK's Overseas Territory that the UK had to protect, sc. the 1982 Falklands War. I acknowledge that the "influence and power of the British Empire dropped dramatically after" WW2, and the "British Royal Navy held command of the sea for most of the period between the 18th to the early 20th centuries, allowing Britain and its allies to trade and to move troops and supplies easily in wartime, while its enemies could not. In the post-World War II period, the United States Navy has had command of the sea.". But compared to the US, the UK's 2 gas-powered CVs appear unimpressive and pitiful. Can the UK military be regarded so highly with just these two?

This Engineering question spurred me to ask this similar question for the RN. Image hails from Wikimedia. 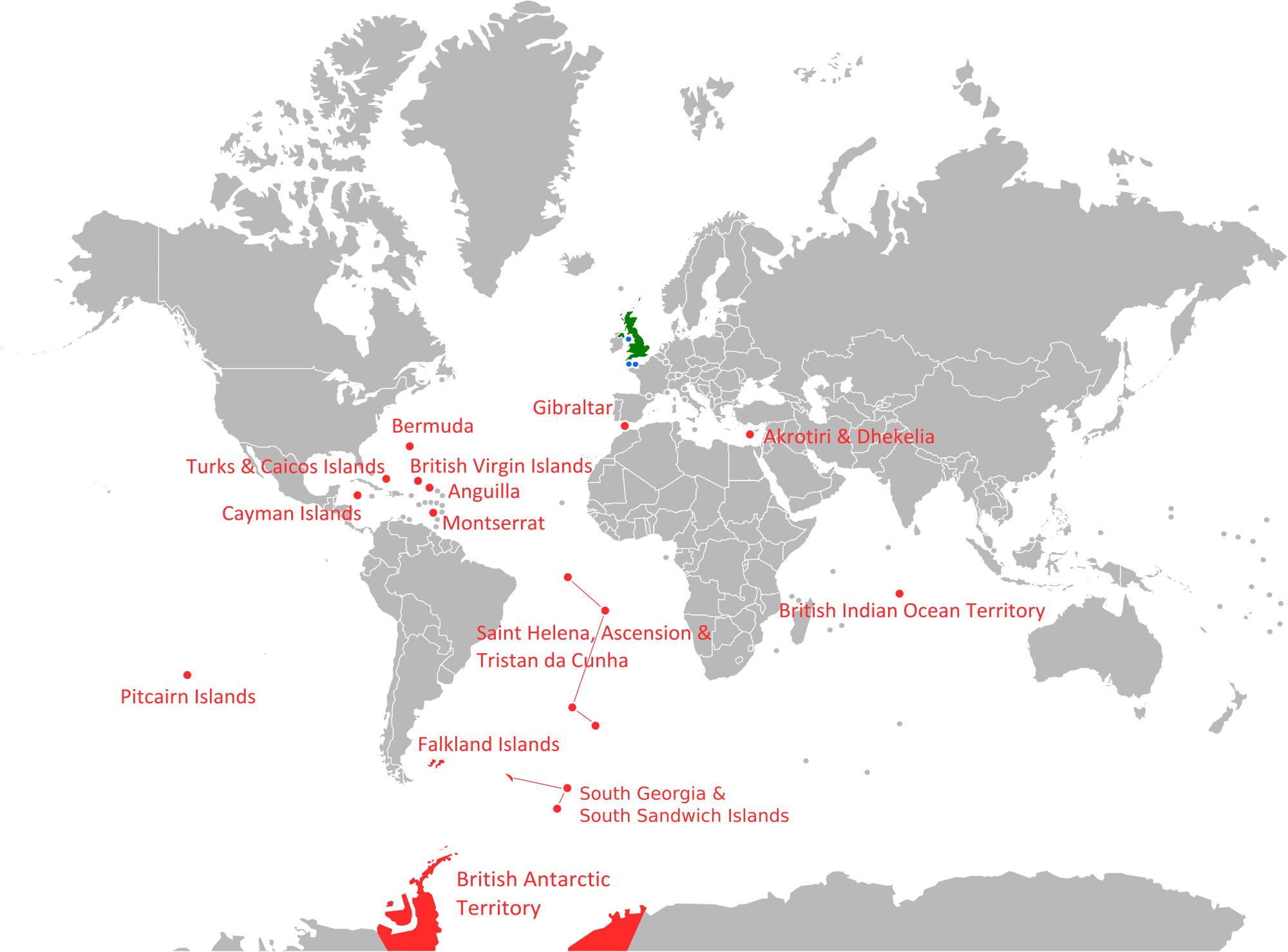 There is a very strong inertia to such decisions. The USS Nimitz is still in service after 45 years and the plans got serious a decade before that. During the Cold War, the British assumption was that they would have to fight the Soviets in Europe, not at one of those little islands your map highlights. No need for an aircraft carrier in the North Sea, or going up the Rhine.

So the naval posture of the UK looks just right for 30 years ago. And the 90s and 00s were not the time to go and buy a major defense upgrade. Just keeping roughly what they had (two new ski-jump carriers for the three old Invincibles) was expensive enough at some £3 billion each.

Follow-Up: As Relaxed points out in his comments, the RN carriers are very impressive compared to anything but an USN carrier. They put the RN ahead of most other navies and represent an ongoing commitment to global naval power. I disagree with Relaxed that they represent a greater commitment to global naval power than during the Cold War. The Invincibles replaced the Centaurs after three decades and the Queen Elisabeths replace the Invincibles after three decades.

To (1): seemingly nuclear power buys you a few extra knots of speed for an aircraft carrier, which only matters for CATOBAR but supposedly not for STOVL carriers. And the UK seemingly can't even afford one CATOBAR carrier; the 2nd Queen Elizabeth class was supposed to be CATOBAR, but this plan was scapped in 2012, due to the costs involved. Apparently (1st link), refueling is not that much of thing for the carrier itself, since the fuel for air wing supposedly outweighs the one for the carrier itself, so fairly frequent meetings with a taker are needed anyway. The French supposedly had difficulties with the propulsion of their nuclear-powered carrier (despite having nuclear-powered submarines, just as the UK does), so expertise in this area is seemingly not that easy to transfer from one type of ship to another. (The UK has no nuclear-powered surface warships whatsoever.)

To (2): this is a somewhat more difficult question. The current UK (Queen Elizabeth class) carriers are substantially larger than the previous ones (Invincible class), almost thrice the tonnage. (According to Wikipedia, during the cold war, the UK's old carriers were mostly expected to carry helicopters, in anti-submarine role.) For more historical reasons why the UK didn't have such large carriers before, see the 1966 Defence White Paper, which cancelled the large carrier then proposed. France has had a somewhat similar story, going from two smaller carriers (Clemenceau class) during the cold war to one larger (de Gaulle), which despite being nuclear-powered still has less tonnage than the current UK carriers. Also France was planning to supplement de Gaulle with a 2nd carrier (PA2) similar to the UK's Elizabeth-class, but this was cancelled in 2013. So really, the UK is in a fairly unique position of having invested in new carriers this decade, at least among European countries...

As for the number of carriers, I'm sure that is related to budgetary concerns as well. The UK did have 3 carriers of the previous (Invincible) class, which were smaller. Also, you need to put the carrier spending in perspective of the overall military budget. For the UK (and France) it's approximately $48-50 billion. For the US it's $732 billion. (And India outspends the UK or France at around $70 billion.)

It is very difficult and expensive for countries the size of the UK and France to maintain a so-called blue-water navy. They have been on the verge of being downgraded for decades now but are keen on maintaining this capability. The Indian and Chinese navy are not comparable. You shouldn't just look at the number of ships but also their tonnage and technical capabilities. They are working on another one but the lone Indian carrier is a second-hand ship with whatever technologies Russia was willing to transfer (and the Soviet Union/Russia never made aircraft carriers a priority for various reasons, focusing instead on submarines). China is ramping up but hasn't made worldwide projection a priority. Beside the US, the UK and France are the only countries to build state-of-the-art aircraft carriers with this in mind.

So with every generation (these programmes take a very long time), France and the UK face similar (difficult) choices. I don't recall all the details (I am not a specialist) but basically nuclear power has several advantages (smaller ship, easier to build a CATOBAR system and therefore more choices of airplanes) but is itself very costly. Going with non-nuclear propulsion allowed the British to build two but it came with a lot of unattractive trade-offs.

Whatever the technical choices, the real question is whether you build one or two. Three modern full size carriers are out of reach for both countries and having a mix of aircraft carriers with different propulsion is a complete non-starter (it would be an engineering, maintenance and even personnel nightmare).

The French renounced ordering a sister ship for the Charles-de-Gaulle (which means the country is regularly months without any aircraft carrier available) and are now considering their options for the next generation. The British chose to build two, which is, contrary to what another answer suggests, testimony to the importance they give to this. Being wed to the F-35B programme is another huge constraint resulting from the technical choices they had to make to afford this. Building these carrier cost a lot to the point that they had to delay purchasing planes to put on them (despite an overall defense budget that is now ahead of France). There is no way the Royal Navy could afford anything else on top of that, the question the UK was facing for years is whether it should build one instead of two.

Finally, you are right that compared to the US, all this looks “unimpressive and pitiful” but these countries are simply not in the same league. While the Royal Navy used to have a claim of supremacy, it gave that up a long time ago. The US Navy alone has a budget that is more than twice the entire military spending of either France or the UK.

Part 2 of the question has been dealt with in the previous answers, I'll respond to part 1 by providing a précis of this excellent article

Nuclear carriers require escort ships and tankers which are conventionally powered. The RN tankers will need to carry diesel in addition to aviation fuel so the range will be shorter but this is less of a problem for the RN since their fleet doesn't have to operate in the Pacific

Nuclear propulsion has the advantage of providing plenty of steam for catapults. The catapult option for the RN ships would have used the alternative Electro-Magnetic Aircraft Launch System (EMALS)

The UK would have had to provide additional land-based infrastructure to build nuclear carriers since Barrow, where the nuclear-powered submarines are built, is at full capacity.

The UK has never built a nuclear powered surface ship and would have to develop the expertise, and possibly a new type of reactor, from scratch. The French did this with the Charles de Gaulle carrier and had all the problems you'd expect with that sort of project

The RN is already hard-pressed to find sufficient qualified personnel to man its existing fleet of 10 nuclear-powered submarines.

The lifetime cost of a nuclear-powered carrier is much higher than that of a conventionally powered vessel. The initial construction cost is also greater because of the physical and regulatory complexity. Disposal of nuclear vessels also presents a significant problem. the UK has yet to completely dispose of a single decommissioned nuclear submarine.

Nuclear vessels attract controversy and protest. Some nations will not allow a nuclear-powered or armed vessels within their territorial waters. Aircraft carriers are high profile ships and are intended as a tool for trade and diplomacy

Think of the paperwork…

British nuclear submarines and facilities are subject to strict regulation and inspection, including plans to mitigate any accidents that may occur. This would add manpower, cost and security overheads.

In addition to the other answers given here, there is considerable concern in military circles that carriers are simply big targets. The point of a carrier group is to project air power. It can only do this within the operational radius of the aircraft it carries. Traditional doctrine therefore is that the carrier group stays out of range of shore batteries, exploiting the fact that its aircraft have longer range. The only way to attack the carrier is therefore by air and sea, which is why a carrier is accompanied by a group of support ships that can deal with this threat.

However these days missiles are being developed which have a greater range than the fighter-bombers on a carrier. That makes it impossible for the carrier to perform operations while staying out of range. At present these missiles are still big and difficult to launch, but that is going to change. Air-breathing sea-skimming hypersonic missiles are likely to become a thing in the next few decades, and they are going to be very difficult to defend against. At that point a carrier group is going to look like a cavalry regiment in World War 1; great for showing the flag and intimidating the small fry, but of little practical use against a serious opponent.

Not the answer you're looking for? Browse other questions tagged united-kingdom military .