I was thinking about an interesting effect that I noticed in Mia Love's race. Out of 2018's Utah House races, her district got the most votes for a Democrat in the state of Utah. (This may not be surprising because it is the most Democratic district in the state. However, it was significantly higher than UT-2. That district is almost as Democratic but not quite) She lost the seat by 1/4 percentage point. Another example was GA-4 where turnout surpassed 2016's level on the Dem side.

I have noticed this in some other races, where a black or at least nonwhite Republican candidate increases the number of Democratic House votes cast. Is there a correlation between black or other nonwhite (if there's insufficient data) Republicans and higher Democratic votes. I want to look at recent data, and by recent I mean 2008 and after.

One interesting, recent (2015), paper which has partially looked at this is Candidate race, partisanship, and political participation: when do black candidates increase black turnout?, by Fairdosi, A. S., & Rogowski, J. C. The paper uses turnout data from the 2010 Cooperative Congressional Election Study to analyse how black candidates affected black turnout in that year's House elections. They chose 2010 as "due to a paucity of black Republican candidates, existing research has been unable to identify whether increased participation occurs irrespective of the candidate’s partisanship".

Their findings, in their own words:

Consistent with previous research in American politics, we find that black citizens— Democrats, Independents, and Republicans alike—are more likely to turn out to vote when a black Democratic candidate appears on the ballot. However, the same does not apply for black Republican candidates; black voters are not mobilized by the presence of a black candidate when that candidate is Republican.

The paper points out that black citizens overwhelmingly vote for the Democratic party, and as a result, it is perhaps possible to hypothesise about how Democratic turnout as a whole may be affected by black Republican candidates. Instead, I have decided to adopt a portion of their methodology, applying it to the 2018 CCES, and extending the sample to all respondents, not just those identifying as black. I've looked at the self-reported turnout rates in each congressional district, and then looked at whether the turnout rates in the districts contested by black Republican candidates in 2018 differ substantially from the overall sample.

There were, to the best of my knowledge, fifteen congressional districts which fielded a black Republican candidate in 2018. These were:

Below are boxplots showing the distribution of turnout figures according to the CCES for these districts, and those of the election as a whole. Interestingly, we see a slight decrease in mean turnout across all categories, as well as slight changes in skew. A Kolmogorov-Smirnoff test performed on all three variables finds p-values of ~0.175, ~0.285, and ~0.607, so there is insufficient evidence to reject the hypothesis that congressional districts which fielded black Republican candidates do not exhibit exceptional turnout patterns - i.e. there is insufficient evidence to conclude that black Republican candidates increase Democratic turnout. 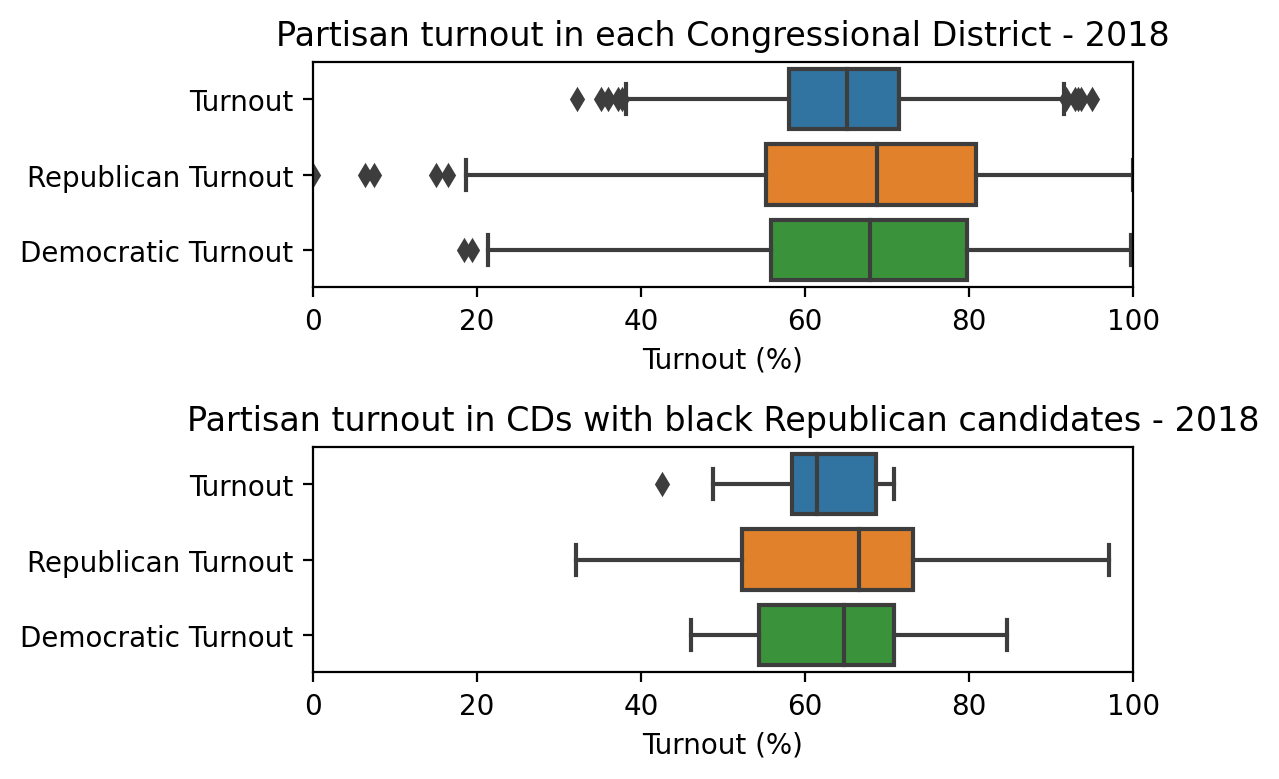 Not the answer you're looking for? Browse other questions tagged united-states election voting parties demographics .

0
Approaches to increase the voter turnout
5
Is Donald Trump the main reason behind the dramatic increase in Republican primary turnout?
3
What was the highest recorded turnout in a major democratic election?
16
In 2016, why did the GOP win the House popular vote while Clinton won the popular vote?
1
What were the 2020 Presidential Results in TX-15 specifically?
0
Why did incumbent House Democrats seem to outperform Biden among Hispanics?