Do primary vote totals tend to indicate the winner in the general election for US Senate?

In June, the Democratic Party won the primary vote in Georgia by ~9 percentage points, 1.19 million to 0.99 million. Do Senate primary vote totals where both sides are having competitive primaries indicate who/which party will win that seat in November?

I am asking this because I wonder if the fact that the Democratic primary registered an advantage bears significance for November's general.

No, I don't think it does because of how primaries are held. Depending on the state only members of the party may vote in the primary though Georgia is not one of those states.

You also have to factor in the fact that there was no primary opponents for the GOP for President, Senate, House districts 3, 4, 5, 10, 11, 12 so there was not a lot of reason for some voters to even show up if they had no one in the party to vote for. In contrast the DNC only had uncontested ballots in House districts 2, 3, 6, 8, 11, 14 so they had a lot more reason to show up in greater numbers. NPR election results

With the knowledge some GOP voters had no one from their party to vote for they could have just voted for a DNC candidate to try and influence the results.

Unlike open primaries, voters in areas with closed primaries have to officially register for a political party before they can vote in the party's primary.

When we talk about open primaries, we are essentially talking about primary elections that are open to all voters, regardless of their political party affiliation.

Open primaries give voters the greatest amount of freedom when casting their vote because they can privately vote in either party's primary.

Voters in areas with open primaries can vote for a candidate in their party, or they may choose to vote on the other party's ballot, crossing party lines.

As you can see, although there is a clear positive correlation, there is a fairly large number of split results, especially when the result is close. The overall correlation coefficient is around 0.71, however, if we only consider races where the primary results came within 20pp of each other, this drops dramatically to 0.24. Only considering races with a margin of victory less than 10pp, the correlation coefficient drops further to 0.16, indicating that this metric might not be the best for predicting the general winner when margins of victory are small, for reasons Joe W covered in his answer. 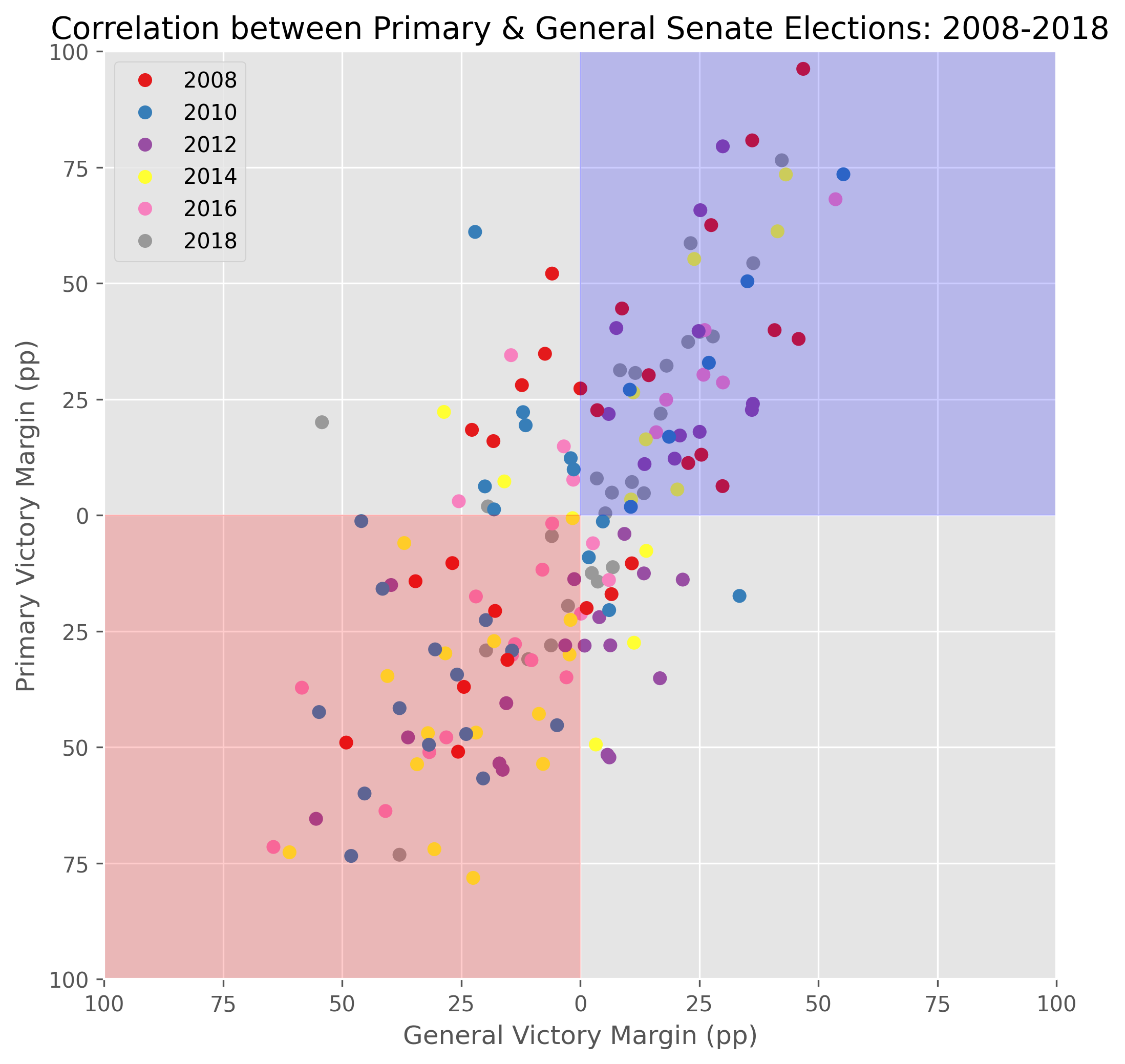 Not the answer you're looking for? Browse other questions tagged united-states parties senate primaries statistics .

5
Can you vote in a primary election in California if you will be 17 during the primary, but 18 during the general election?
17
Are there advantages to my being registered as an independent in the US?
4
How do US media networks decide to call the winner of a primary with ongoing count?
11
Does it matter if I vote for an unopposed candidate in a primary?
1
Make sense of the NYT Senate totals?
3
Has a candidate ever been nominated after losing their party's primary and then gone on to win the general election?
0
Historical record of Senate primary vote total predicting statewide presidential result