Most of the polls it has (re)tweeted are favoring Biden by 10% nationally or so (except those conducted by https://twitter.com/Rasmussen_Poll). But all the polls which it itself conducted on twitter in past months always show 30%+ lead by Trump, and the most recent one is https://twitter.com/PpollingNumbers/status/1310007036294430725: 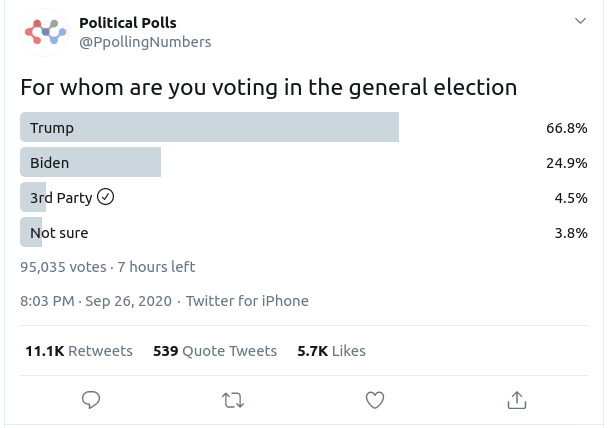 At least half of comments under the tweet are anti-Trump or pro-Biden, and so are half or most tweets on Twitter in general. My impression has been that Twitter is a social media with majority accounts having (neo)liberal ideology. I was wondering how to understand the contradiction which happens consistently and is echoed by another user? Is it because of the silent majority and shy Trump supporters on Twitter? Or is it because of interference by Twitter accounts outside US?

This is just a random twitter poll where anyone can vote regardless of being able to vote regardless of their actual voting status for the election. There is nothing that stops anyone from voting especially bots and the voters are all self selected which means the votes are not reliable.

In addition to what Joe W said, it's possible that it's not just poor sample selection. Online polling, especially on Twitter, is extremely easy to sabotage. Many votes are likely cast by bots or people with multiple accounts. In addition, neither bots nor people with multiple accounts are likely to post comments. It's not just selection bias, but willful disruption. Like the time Justin Beiber held an online poll to determine his next concert location, and pranksters voted for North Korea and won handily.