I was thinking about a potential swing state (Georgia) and the fact that the Democrats got 8 percentage points more votes than the Republicans. I was thinking about the historical accuracy of this as a metric for partisanship. How accurate were Senate primary totals in predicting statewide winners in presidential election years since and including 2008? What I mean is the party with the most votes in Senate primaries going on in the presidential election and winning the electoral votes.

In general, there is a decent correlation between the margin of victory in the Senate primaries - in terms of the total number of votes - and the margin of victory in the Presidential election. However, it is questionable whether this metric is a good one to use when predicting the result, for the same reasons Joe W laid out in his answer to a related question. The data I used to examine this is from the FEC election results found here.

The graph below shows that there is a fairly clear overall relationship between the two variables, with a correlation coefficient of ~0.68. However, we can see also that the relationship varies quite significantly by year. For example, in 2008, six states recorded higher participation in the Democratic Senate primary than the Republican primary - but voted for McCain in the presidential election. On the other hand, four years later in 2012, seven states recorded higher participation in the Republican primary - but supported Obama in the presidential vote. 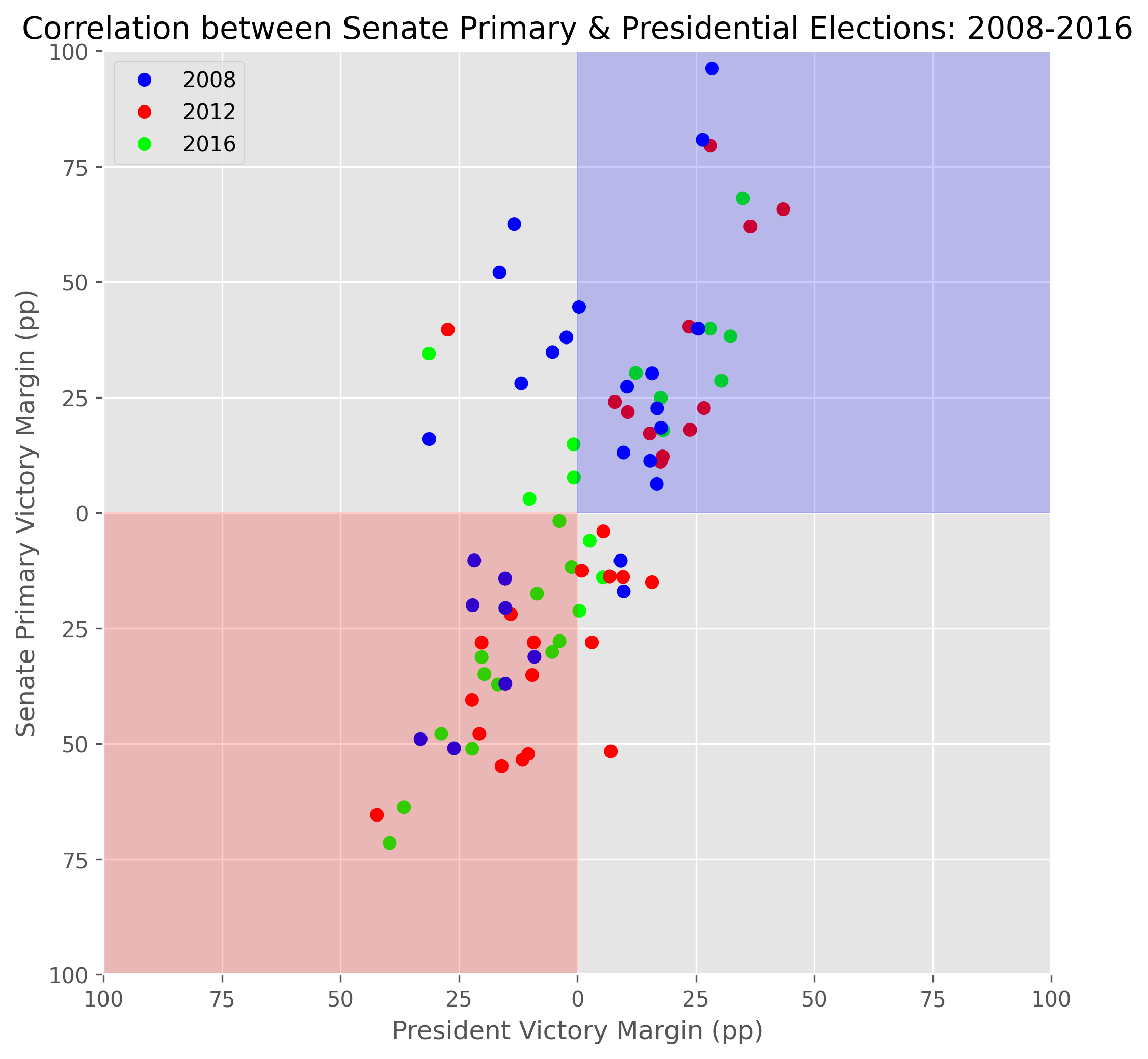 Not the answer you're looking for? Browse other questions tagged united-states election senate primaries statistics .

3
Do primary vote totals tend to indicate the winner in the general election for US Senate?

9
Would Third Party Candidates in the United States fare better under a proportional representation split of electoral votes?
4
Can US voters prevent major presidential candidates from winning by voting for a non-existing write-in candidate?
2
Could the US President be elected by Kevin Costner?
2
Are caucuses less democratic than primaries?
11
If Congress discards a state's electoral votes, does it change the number needed for a majority?
6
Was the Democratic vote less efficient in 2018 than in 2016?
1
Is California more liberal than Vermont?
0
What was attributed to Trump's narrower margin of victory in Texas compared to Romney?
3
Do primary vote totals tend to indicate the winner in the general election for US Senate?