What distinguishes, if anything, the ominous presence of one or more partisan self-appointed possibly armed poll observers full of appraising stares, and the federal crime of voter intimidation? The text of 18 U.S. Code § 594. Intimidation of voters:

Whoever intimidates, threatens, coerces, or attempts to intimidate, threaten, or coerce, any other person for the purpose of interfering with the right of such other person to vote or to vote as he may choose, or of causing such other person to vote for, or not to vote for, any candidate for the office of President, Vice President, Presidential elector, Member of the Senate, Member of the House of Representatives, Delegate from the District of Columbia, or Resident Commissioner, at any election held solely or in part for the purpose of electing such candidate, shall be fined under this title or imprisoned not more than one year, or both.

First, let's point out that this kind of 'poll watching' is not a new idea at all. Back in 1981, the Republican National Convention paid armed, off-duty police officers to surveil polling stations in districts with a large black and hispanic population, calling themselves the National Ballot Security Task Force. 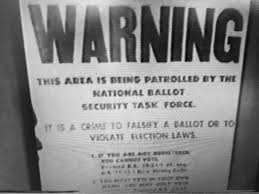 They were later sued by New Jersey and settled with a consent decree that prohibited this behavior. But that consent decree only applied to New Jersey, and expired in 2017 (after numerous attempts by the RNC over the decades to rescind it earlier), and is still credited with changing the outcome of the gubernatorial race. And need I mention the efforts at armed intimidation made by independent groups like the KKK during the Jim Crow and Civil Rights eras..?

Most states have electioneering laws that prohibit people from being within a certain distance of a polling station while ballots are being cast — anything from 30 to 200 feet — unless they are poll workers or currently casting their vote. Some states extend that moratorium to the people queued up waiting to vote, so that long lines of people are immune to direct harassment. Outside those limits there are no legal restrictions that apply, aside from the normal state restrictions that might apply to any public gathering. I expect that the felony charge of voter intimidation would only apply when someone is charged with normal intimidation (as defined by a given state) if that intimidation is aimed at someone queued up to vote. It's an add-on charge (similar to 'hate crime' charges) that merely increases penalties. Generally speaking, passive observation is not considered legal intimidation. One must take an action: brandish a weapon, make verbal comments, obstruct progress or entry, or otherwise actively interfere with a person's ability to enter the polling station and cast a vote.

The best solutions to this kind of passive intimidation are the same ones that have been used by abortion clinics against the intimidation tactics of anti-abortion protesters: information and guides. If I were in the position of the Democratic Party, I would coordinate a large group of 'Poll Walkers' (pardon me for making up terms) who would stand outside polling stations informing people they have a legal right to vote, and that any ostensible poll watchers have no legal standing to interfere. Such poll walkers could act as a shield between voters and any intimidation efforts. Intimidation relies on making people feel isolated, alone, and afraid; the moral support of even one person can dramatically reduce its effects. Of course, guides would have to obey federal, state, and local regulations themselves, which is why coordination by a large organization like the DP would be advantageous. But the question here seems to be the age-old question of "Who watches the watchers?"; and the obvious answer is "We do."

Not the answer you're looking for? Browse other questions tagged united-states crime discrimination voter-turnout citizen-activism .

13
What would happen if the same person were elected both President and Vice President?
0
Approaches to increase the voter turnout
6
Where does the US Constitution mandate and define a "State Legislature"?
9
Does the Electoral College majority requirement play a role in keeping the US in a two party system?
9
What happens in the event of a tie for a 12th amendment House vote?
6
Wrongfully influencing a private entity’s employment decision/practice, Is this law being violated?
3
U.S. voter turnout and political party
4
Best metric for comparing poll queue times?
9
In the event of a Presidential candidate's death after the printing of ballots, would the Electors of certain states be able to vote at all?
6
Has any US state legislature ever disregarded the outcome of a presidential election in that state to appoint all electors of a losing party?