Why didn't Americans Elect field a candidate in the 2012 U.S. presidential election?

Americans Elect was trying to get an alternative candidate on the ballot in the 2012 presidential election. The party was to hold a completely online convention to elect a party ticket to run. However, the party ended up not fielding a candidate and not showing up on the ballot.

What was the reason that no ticket was put forth and what factors most contributed to that result?

A political party (and any organisation that seeks to field candidates for office is a political party, whether it claims otherwise or not) needs two things:

The founder of AE, Peter Ackerman, seems to have an ample supply of the former - he made over $300 million as a director at the junk bond trading firm Drexel Burnham Lambert, before the company filed for bankruptcy in the wake of a securities fraud investigation, and his disputes with the IRS over $150 million in allegedly unpaid taxes suggest that he's at least as wealthy in recent times as he was at the collapse of Drexel.

It's in the second category, footsoldiers, that AE seems to have been lacking. The AE website is, at this point, little more than a holding page, but at the time of AE's withdrawal from the 2012 presidential race, its effort to find a presidential candidate with widespread support had been singularly unsuccessful: 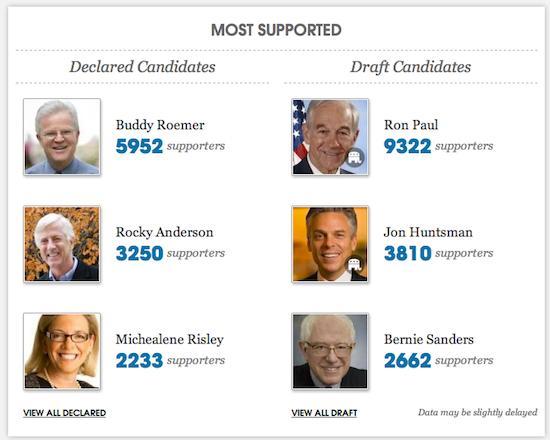 This is not, to be honest, surprising. People who decide to invest their time and energy in causes do so because they are passionate about them, and AE's founding principle - that politics in the US is too partisan and polarized - may not be particularly inspiring to such people; few are passionate about being somewhere in the middle.

AE did, however find one candidate to support for election: Angus King, who was subsequently elected as Senator for Maine. A complaint about alleged irregularities in AE's support for King was filed with the FEC by the Republican Party of Maine as a result of this support.

Presidential elections start at least two years in advance of the election. Americans Elect started in February 2012 with their nominating process. Without sufficient lead-time, it is impossible to generate sufficient mass (momentum and money) to get a candidate to move forward. The sign-on process to get a delegate officially listed took anywhere from 20 minutes to two days, in Internet time, this is a life-time. Candidates had to go find their own delegates to build a base which required them to find them through mobile vans with computers to sign them up. The cost for each supporter would be about 5 times the cost for the Republicans or Democrats to get ballot signatures. A serious candidate would need $5 million to get nominated on Americans Elect. If one were going to spend $5 million to get on the Americans Elect ballot, one could simply do it themselves without the baggage of Americans Elect because after the nominating process, Americans Elect was not supporting the candidate after the election. The Americans Elect board demanded a centrist candidate from each party instead of one from the left and one from the right. This created a false impression that the board would not approve candidates that did not meet their criteria.

AE made some HUGE mistakes. It had incompetent PR. Instead of promoting the enhancement to democracy its nomination process provided, it allowed its detractors to spread false images of it as elitist. It should have taken on the debate with every critic who got any notice.

Also, its Internet voting system was half-assed. The system didn't provide for a secret vote, but kept voter ID and vote together (see this article).

AE was a great idea for a truly democratic presidential nomination process, but the idea was incompetently implemented and managed.

Not the answer you're looking for? Browse other questions tagged united-states election president electronic-voting third-party .

3
Can US voters prevent major presidential candidates from winning by voting for a non-existing write-in candidate?
11
What happens if a top-ticket nominee becomes completely incapacitated near an election?
10
What has divided the country so severely since Bill Clinton's election?
1
Is there a website that breaks down the 2012 presidential election results by congressional district?
5
Why does the media workforce lean liberal or democrat
55
Why do candidates not quit if they no longer have a realistic chance to win in the 2020 US presidents election
2
Can electors in US make complex “vows”?
11
Why does the Democratic Party perform well in New England?