Are there any official statistics on average rejected/missing/lost ballots by mail?

Some time ago, Washington Post presented an article about flaws of mail voting. Another article tells about "tens of thousands" such ballots.

And that caused me to ask this question:

Is there any known average amount of missing/rejected/not counted mail ballots?

Yes, the Election Administration and Voting Survey - conducted biennially since 2004 by the Election Assistance Commission - collects this data.

The 2016 report can be found here. In particular:

Approximately 80.1 percent of absentee ballots that were transmitted to voters were returned and processed, with 1.4 percent of transmitted ballots returned as undeliverable and 2 percent reported as spoiled (e.g., the voter returned the ballot and asked for a replacement).

Ninety-nine percent of absentee ballots categorized as “returned and submitted for counting” were ultimately counted in the 2016 election. 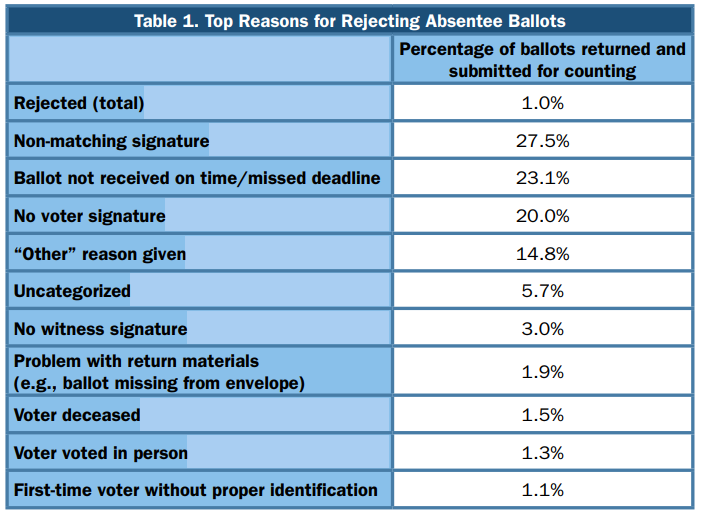 To put a raw figure on the number of ballots rejected, the report also states that "Nationally, by-mail voting constituted 23.7 percent of all votes cast in the 2016 election".

Not the answer you're looking for? Browse other questions tagged united-states presidential-election vote-by-mail .

15
What fact-based arguments exist that mail-in voting would lead to significantly higher instances of US voter fraud?
3
Absentee Voting in Ohio - What does the “vote capturing machine” do?
2
Was Trump such an underdog 4 years ago according to polls?
10
How many people voted early (absentee, by mail) in the 2016 US presidential election?
9
Wouldn't it be beneficial for Democrats to support a bipartisan investigation into voter fraud allegations?