Ticket splitting (the practice of voting for both major parties) has been on the decline for a while. This has been measured in split-ticket House districts, which hit a near all-time low in 2012 and stayed under 1 in 10 districts in 2016. This picture shows by party, which I feel shows it by race in a way because nonwhites in general are overwhelmingly Democratic. 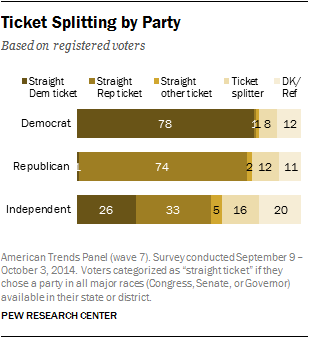 I feel that at least part of the party gap was driven by race because Pew data showed that about 55% of Democratic voters are white and 85% of Republican voters are white. Also, heavily white New England states had split tickets despite the Senate races not even being close for governor.

Are nonwhite Democratic voters in particular unlikely to engage in this practice? My analysis of precinct-level data suggests the answer is yes but I want to see a survey and/or in depth analysis.

I identified a ticket-splitter as a voter who - given the option - did not vote for either a straight Republican ticket or a straight Democratic ticket for President, Senate, House, and other state offices. Unfortunately, as the CCES doesn't record which party participants voted for in other state offices, I'm unable to give the breakdown for those who voted for a straight third-party ticket. Party affiliation is determined by voter registration, race from self-identification.

15
In 2016, why did the GOP win the House popular vote while Clinton won the popular vote?
4
In recent US elections, is turnout among millennial voters lower than voters in the baby boomer generation?
17
How do Republicans explain their lack of support among minority voters?
5
Has some candidate won the Democratic ticket without winning either Iowa or New Hampshire?
6
Are Democratic voters more firm in their voting preferences?
3
Is ticket splitting correlated with low information?
5
Is splitting states to rebalance the senate really a viable strategy for the Democratic party?
1
Did the Republican shift among Hispanic voters come entirely from Florida and the Rio Grande Valley?
5
In the US, have COVID deaths been evenly distributed among registered party voters?