What is China's objective in militarizing the South China Sea?

I was reading a presentation from Capt James Fanell (retired director of intelligence and information operations at U.S. Pacific Fleet) on China's Navy:

He made this statement which caught my attention.

Transcript: The Rise of China’s Navy: A Discussion with Capt. James Fanell
China built between – late 2011 and through 2015 seven artificial islands in the South China Sea. And three of those islands are the same size and dimensions, in terms of geography, as Pearl Harbor. One of them is the same dimension as the beltway that goes around Washington, D.C.

China says the sea is part of their historic territory, a claim refuted by the Permanent Court of Arbitration in The Hague. Western Intelligence experts asserted in 2011, China is after the natural resources in the South China Sea ( oil, natural gas, fish ).

Given we now understand that we badly underestimated the scale of China's militarization in the South China Sea and Navy, detailed above which seems like overkill to get natural resources; Is there a different strategic objective which they could be after by controlling that swath of ocean? 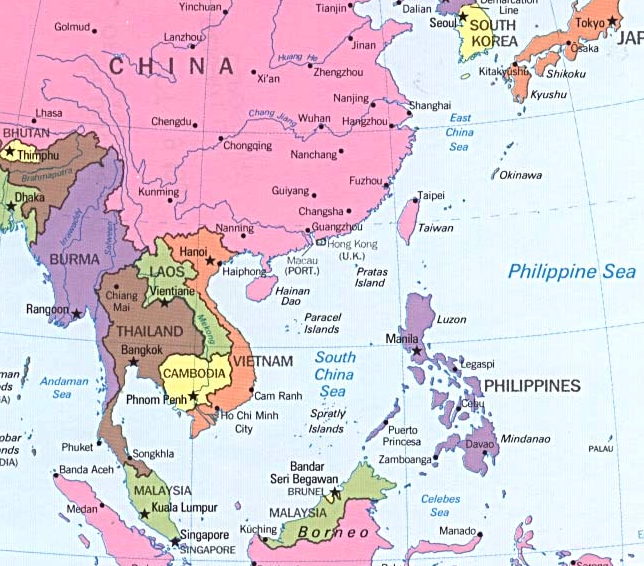 There are 3+1 likely reasons China wants to mess around in the area:

China, or more exactly the CCP wants to throw its weight around. It can cow its neighbors into submission, establish dominance by putting up bases, provoke the US and play on national pride. Call it the equivalent of a bobcat pissing on a tree, Pooh Bear-style. Sorry, Xi-style. If really pushed, it can always withdraw and conjure up some extra nationalistic wounded pride.

Unlike say doing something nasty to Taiwan until it's really ready, losing face there is not an existential challenge to the ruling party.

Remember: the CCP may not hold elections, but it is highly sensitive to public sentiment. Conjuring up foreign enemies is a part of those calculations.

Neither is it a do-or-die area for the US. In other words, a trial balloon.

China has, as you point out, a growing navy. But until now, it's more what one would call a brown-water navy than a blue-water navy. It can operate in the vicinity of China's coast, but is not an especially capable long-distance force-projection in the tradition of say the USN or the Royal Navy. Just like the Soviet Navy was a bit of an afterthought in the USSR lineup. Having the South China Sea to operate in, which it wouldn't have if had to rely on what are still mostly pro-Western coastal states, is like training wheels on a bicycle.

The previous answers all have their own merits, but they (understandably) focus on how things look from outside.

The historic ownership claims (S.C.S. and Taiwan included), whether embellished or not, are now beliefs held by the majority of people in China, in much the same way that most U.S. citizens support Israel.

Xi Jinping is a traditionalist and a nationalist - and he buys into this narrative very strongly. The party members are incentivized to please him (in order to get promoted), and also the general public (in order to justify their stewardship of the country).

I would say this is the "main" reason. Militarization has strategic and economic benefits, but I tend to view them as a natural consequence of a powerfully held belief: China's "rightful" status as the dominant power in the region.

P.S. the logical consequence of this is that it is now practically unstoppable in our lifetimes. It is something that will continue with or without the C.C.P. and will eventually override any "promises" made with other states.

Italian Philosophers 4 Monica lists some excellent reasons. But probably the biggest reason is that China wants to take over Taiwan.

Obviously, control of the South China Sea would be critical in any war over Taiwan.

It is the United States, not China, that is militarizing the South China Sea.
The US military's provocative activities in unrelated waters can only increase the militarization of the region.
Regarding the construction of islands in the South China Sea, other countries have implemented it for many years, but it is only because of China's greater power that it can build them faster.
China is committed to peacefully resolving disputes in the South China Sea with ASEAN countries. It is the United States that wants to create conflicts in the region and distract China.

The main goal, for me, is covering Chinese shores from the potential naval strike. It's logical - if you have fortified islands, opponent's fleet should first battle through them, before reaching your shores.

US is constantly threatening China with naval maneuvers, so China is trying to do their best to make defences.

"Promised not to" => "exactly doing that" - breaking promises is common.

US promises prevent NATO expanding to the east, and where it is now? US left a deal with Iran just by their wish, without any provocation - also can be treated as promise break. It's real politics, and any words are just words.

9
What is the historical basis for China's claim on the South China Sea?
5
What are the US's major goals in the South China Sea?
25
Would Taiwan and China's dispute be solved if Taiwan gave up being the Republic of China?
10
What are China's Interests in the Arctic?
3
Why does China want to militarily dominate Asia?
10
Why is the South China Sea strategically important to the United States?
1
Has post-revolutionary China ever backed down in international (plus SARs, TAR and cross-straits) affairs?