I was wondering about the abortion issue in the US which is a hot topic. Poland just banned abortion and people are protesting against it in the capital. I was wondering about whether or not this opposition to abortion applies to the European right as well. I have noticed many parallels such as immigration and anti-mask views.

Not in general. For example the Conservative party in the UK made no mention of it in their last election Manifesto, implying that they support the status quo (abortion permitted with the approval of two doctors until fetal viability = 24 weeks, or up to birth in extreme cases) And Conservative members voted to extend abortion rights to Northern Ireland.

The Conservative party's membership is less pro-choice than Labour or the Lib-Dems, but would not be considered a "Pro-life" party.

Similar things could be said about Angela Merkel's CDU (which has engaged on a reform of abortion law, that would generally leave the procedure legal). There are Pro-life parties, such as NI DUP. Also, conservative parties in generally Catholic countries tend to be pro-life, this is the case in Catholic Poland.

Many countries in Europe have no constitutional protection of abortion rights, and right-wing parties have been in power in many countries. They have been in a position in which they could ban abortion, and haven't.

If we interpret "opposition to abortion" as intent to either ban abortions, or restrict them to exceptional circumstances (e.g. rape, preserving the life of the mother), the answer to the question as phrased is: No, we cannot say that European right wing parties in general oppose abortion to such an extent. However, European parties that do oppose abortion tend to be right wing, and we can say that European right wing parties are generally in favor of tougher abortion regulations than their local left wing counterparts.

Just focusing on the 3 economic powerhouses:

Abortion in Germany is illegal under Section 218 of the German criminal code but simultaneously decriminalized under Section 218a of the German criminal code called Exception to liability for abortion, in the first trimester upon condition of mandatory counseling, and is also permitted later in pregnancy in cases of medical necessity. In both cases, a waiting period of three days is required. The counseling, called Schwangerschaftskonfliktberatung ("pregnancy-conflict counseling"), must take place at a state-approved centre, which afterwards gives the applicant a Beratungsschein ("certificate of counseling"). Wikipedia

Center right parties CDU/CSU (~40% votes) and FDP (~5% votes) do not intend to change this. Some elements of the far right AfD (5% votes) want to outlaw abortions altogether, but the party platform doesn't go quite this far: The AfD opposes all attempts to downplay abortions, government support for abortions, or to declare abortions as a human right. Center left SPD (~25% votes) wants to legalize rather than just decriminalize abortion.

In Great Britain, abortion is generally allowed for socio-economic reasons during the first twenty-four weeks of the pregnancy (the highest such limit in the EU, together with the Netherlands), and beyond for medical reasons. Wikipedia

The manifestos of the right wing Conservative Party and the Brexit Party do not mention abortion, while those of left wing Labour, Greens, and center left Lib Dems mention explicit support.

Abortion in France is legal on demand up to 12 weeks after conception (14 weeks after the last menstrual period). Abortions at later stages of pregnancy are allowed if two physicians certify that the abortion will be done to prevent grave permanent injury to the physical or mental health of the pregnant woman; a risk to the life of the pregnant woman; or that the child will suffer from a particularly severe illness recognized as incurable. The abortion law was liberalized by the Veil Law in 1975. Wikipedia

Neither the right wing Republicans nor the far right National Rally (formerly Front National) oppose this, but they opposed a recent attempt to extend the timeframe by 2 weeks.

I would say there is a huge degree of variation across different countries (and within those countries).

In the UK, abortion is a major political issue in Northern Ireland, but otherwise contested only by a relatively-minor-but-extant Christian Right. In Poland, it's a hot-button issue, but not so much in other countries. It really depends massively on the country and even the region within that country.

As you've mentioned, Poland highly restricts abortion due to Christian majorities and a Christian-political view but also Malta, Andorra, San Marino which are the only European Countries that criminalize abortion.

Poland: The planned law had garnered support from both the Catholic Church and Poland's governing right-wing Law and Justice party (PiS). It was submitted by the country's Stop Abortion coalition, and drafted by a hardline conservative Warsaw-based advocacy group and think tank called the Ordo Iuris Institute.

In reality, discrepancies and stipulations still occur. This is large because the EU's mandate is somewhat restricted—reproductive rights do not fall under the EU Charter of Fundamental Rights, the legally binding document that protects the rights and freedoms of all European citizens. As opposed to the European Union rises with the spread of anti-immigrant, nationalist sentiment across the continent, that mandate looks to be restricted even further.

Attitudes towards reproductive rights seem to be in a state of flux across many European countries right now, including Hungary, Macedonia, Italy, and Slovakia.

No, the European right does not, at large, oppose the right to abortion¹.

Most European countries have the right to abortion:

This doesn't really relate to the largest party in government: 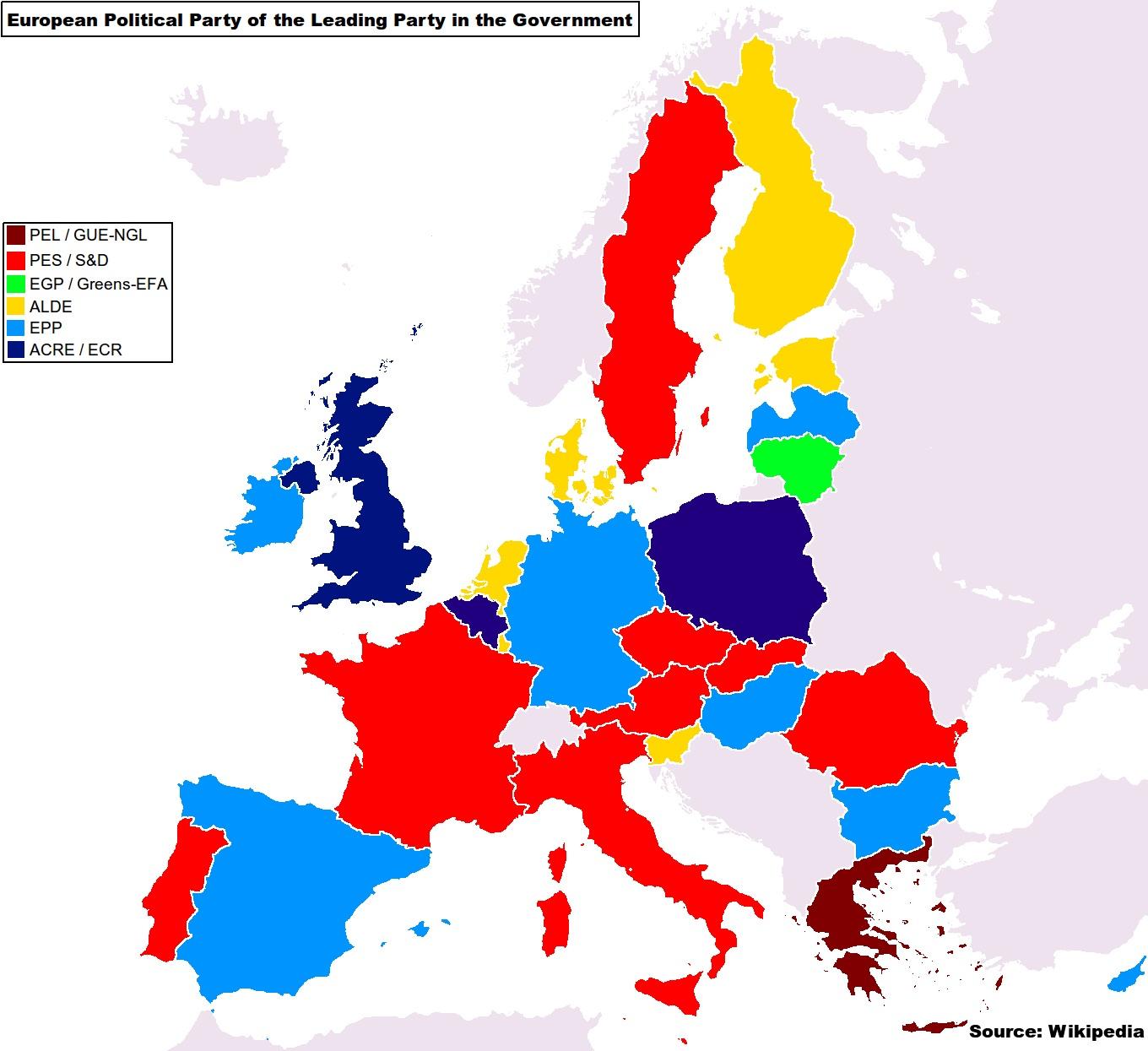 Abortion is generally restricted in Latin America, Africa, and South Asia. It is generally available in North America and Europe. Governments vary, but if the right-wing were more generally against it then there would be more countries in Europe with restrictions, either by changing the law or the constitution.

Note that the United States here is blue, despite many people in the party in charge (Republican Party) probably preferring to make access to abortion more restrictive, perhaps similar to Poland or much of Latin America. However, that opinion is probably not universal even in the Republican Party, and actually changing the law is difficult as the supreme court ruled that the right to abortion is fundamental. However, most European countries do not have supreme courts as powerful as in the United States, or other constitutions where courts would not conclude such a right.

I will interpret opposing abortion as opposing the right to abortion. It is possible to oppose abortion but support the right to abortion. I'm against smoking but also against completely banning smoking. Many people would agree that preventing abortion through improved sex education and access to birth control is desirable, and that abortion should only be used as a measure of last resort and not as regular birth control. 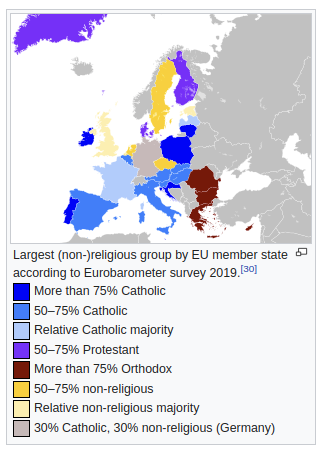 This map rather accurately reflects the situation regarding abortion. As one would expect from looking at this image, abortion is mostly an issue in Poland, Ireland and Portugal. To a lesser but significant extent, it is also an issue in Italy, Spain and other countries with a catholic heritage.

On the contrary, women's right to choose is a non-issue in the non-religious and protestant countries, also in the conservative parties.

In some countries, such as the Nordic countries, anti-abortionist views are unacceptable in conservative parties.

As it were, one cannot say that European conservatives are generally against abortion. However, one can say to some degree of accuracy that where catholic conservatives make up a part of the conservatives there is also to some extent an opposition to abortion.

Today, 70 percent of Italian gynecologists and 48.4 percent of anesthesiologists decline to perform terminations, according to a report from the Italian health ministry presented in December.

In more conservative regions such as Sicily and Campania, as much as 84 percent of doctors object to abortion. That leaves a tiny group of abortion providers to deal with a huge demand for terminations.

This can be compared to northern countries where that number is 0% because if you refuse despite being asked by your employer, that is grounds for being fired. This too is a political decision, whether abortion should be legal or not is not the only political decision.

In the case of Germany, the right-wing CDU/CSU is opposed to abortion (see eg here or here), as is the fascist AfD (see eg here).

Looking at Europe more broadly, the EPP (conservative, Christian coalition) opposes abortion. It seems that the right to far-right ECR does as well. The right-wing extremist ID likely does as well, given that the individual parties of the coalition do so.

The key dimension to understand the politics of abortion in Europe is religion - both the general place it holds in public life, and Protestantism vs Catholicism specifically.

For example Great Britain (England, Wales, Scotland) are relatively liberal and it is not a major political dividing line. But these are societies where the public role and power of relgion is waning (despite having an established church!). Tony Blair wa quite strongly religious but was firmly told by an advisers "We Don't Do God!". Also Protestantism predominates.

Whereas in the Republic of Ireland abortion was illega until 2019. The country is predominantly Catholic.

Abortion was also highly restricted in Northern Ireland until recently despite being part of the UK and despite having a Protestant majority. But the role of religion and the overall politicl system is - err - historically complicated.

One has to understand the politics at country level though. France is - to the extent people are religous - primarily catholic - but also an explicitly secular state.

Not the answer you're looking for? Browse other questions tagged europe abortion .

6
In European monarchies, do any of the monarchs have the right of legislative initiative?
18
Do feminists oppose sex-selective abortion?
34
Why did Democrats in the Senate oppose the Born-Alive Abortion Survivors Protection Act (2019 S.130)?
18
On what dimensions does the current Republican party differ substantially from the right-wing parties in Europe?
12
Have supporters of "right-wing populist" parties in Europe explained why they trust Trump?
6
Is there any European country that managed to construct a coalition made out of more than five parties?
16
Why, according to the UN, "gender-biased abortion" is against human rights but "abortion in general" is not?
2
Has any European far-right party managed to enter the legislative body relying almost exclusively on social media promoting?
31
Are police in Western European countries right-wing or left-wing?