What powers, if any, does POTUS have to ban fracking on private or state owned property?

Can the President or Executive branch prohibit fracking on private or state-owned property?

Can the President or Executive branch prohibit fracking on private or state-owned property?

Not presently, because there are numerous exemptions for hydraulic fracturing in both law and regulation.

There are many exemptions for hydraulic fracturing under United States federal law: the oil and gas industries are exempt or excluded from certain sections of a number of the major federal environmental laws. These laws range from protecting clean water and air, to preventing the release of toxic substances and chemicals into the environment: the Clean Air Act, Clean Water Act, Safe Drinking Water Act, National Environmental Policy Act, Resource Conservation and Recovery Act, Emergency Planning and Community Right-to-Know Act, and the Comprehensive Environmental Response, Compensation, and Liability Act, commonly known as Superfund.

And even if [Biden] wanted to ban all fracking, he couldn’t. According to Harvard’s Joseph Goffman, the EPA’s former top climate attorney, the president wouldn’t have the executive power unless Congress passed a new law. Mother Jones

Legislation is needed to close these loopholes and may be introduced in the new Congress.

Since that call for legislation was made (February 2013), 27 bills were introduced1 (including multiple submissions), in both the House and Senate, during the 113th through 116th Congresses. Only one passed the House — none passed the Senate.

——
1The search for legislation was for "fracking" in either the title of the bill or the text.

Congress clearly has jurisdiction and authority to enact federal laws that impose environmental regulations upon both private land and upon state owned land. And, it has done so. Among the more notable are the Clear Air Act and the Clean Water Act. There are also multiple environmental laws governing the pollution of land with various kinds of pollutants. All of these laws apply to privately owned land and some apply to state owned lands subject to certain exceptions which are not complete exemptions for all state owned property.

Congress has also enacted industry specific regulations of the oil and gas industry that are not exclusively environmental laws. And, Congress has enacted laws setting guidelines regarding how federally owned lands are managed. The Bureau of Land Management, the Forest Service, and the National Park Service are among them.

In particular, the federal government reserved the mineral rights in most, but not all of the Continental U.S. to the West of the Continental Divide, at the time that the surface rights were homesteaded or otherwise transferred from federal government ownership to private ownership. The story of how it got that way, which has several parts and is rather complex, is retold in a law review article. 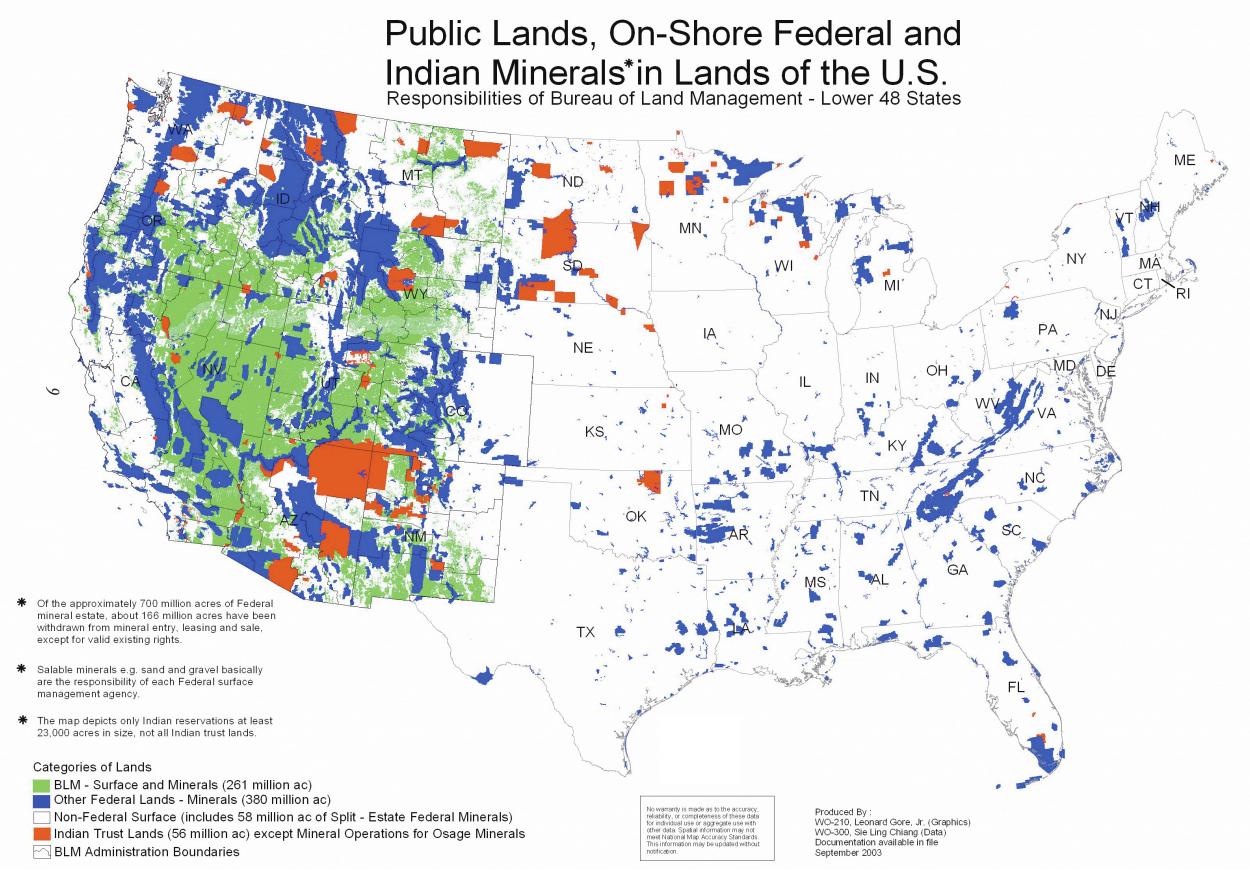 This needs to be compared to the places where there are oil and gas resources suitable for fracking, roughly speaking, Texas, Oklahoma, Louisiana, Northern Michigan, the Appalachian mountains, select places near the Rocky Mountains, and isolated other sites.

The President can't revoke existing oil and gas leases, but can decline to issue new fracking leases for federally owned mineral rights (regardless of who owns the surface rights to the land in question) and can established new environmental regulations that limit fracking, often simply by rescinding new Trump administration regulations that, for example, allowed oil and gas leasing closer to National Monuments and National Parks than had previously been permitted.

The President could also toughen the regulations governing the cleaning up and shutting down of oil and gas extraction sites in a way that makes it less economic to frack, could strengthen OSHA regulation of oil and gas worker safety, and could authorize states to issue their own environmental regulations with respect to private land that would otherwise have been pre-empted by federal law - something the Trump Administration rescinded permission to do in Oklahoma with respect to land (almost half of the state) that the U.S. Supreme Court recently declared to be part of an Indian Reservation.

To say that that the President can or will "ban fracking" oversimplifies the matter and amounts to hyperbole. But the President's regulatory power over the oil and gas fracking industry that can be exercised without Congressional action is considerable.

Also, when a President promises to do something if elected, there is often an implied notion that some of this will be done by pushing for legislation in Congress to give the President this power and Congress certainly has the authority to give this power to the President.

... reality is not as simple as that. Many companies have leases to frack on federal lands which extend beyond a potential 8 year Biden presidency. Banning certain companies from fracking on federal lands may require a Biden administration to use federal funds to buy out leases from frackers at current market prices.

There are other methods the US Government might take in preventing fracking on federal land, such as eliminating or repositioning staff responsible for signing off on permits and what not, but this only makes fracking more difficult, not totally impossible and certainty short of a ban.

To summarize my comment, banning fracking on federal lands, like most things to do with politics, isn't always straightforward.

That said, I do believe the U.S. Government has total control over offshore oil production which accounts for about 16% of total oil production in the U.S.. This could potentially cause more disruption, but at the cost of many high paying jobs and probably some political support.

Not the answer you're looking for? Browse other questions tagged united-states environmental-policy regulation oil gas .

3
Is the current action by the BLM in Bunkerville Nevada a violation of the Posse Comitatus Act
54
What does the POTUS do, exactly?
6
What powers does an individual member of the House of Representatives have?
8
Why does the US Supreme Court work this way?
46
What are the Republicans' arguments for blaming the Democrats for the shutdown?
2
Is a state-level legal proceeding against a sitting president any less of a burden on the president?
3
Why does the Federal Government of the United States not have a plural executive, like most of its states?
6
Who is the “agency designee” with respect to 5 CFR § 2635.502 (c)-(d) for the White House?
19
What determines who gets to stay in the Presidential Townhouse / Trowbridge House?
1
As of 2021-01-20, which Federal facilities did not require wearing a mask on premises?