Why is the AP calling Virginia in favor of Biden even though he's behind on the vote count?

What other determinants are they using to make the call?

The AP has a lengthy explainer on their methods on their website.

According to an article by the New York Times, the AP has its own network of local reporters providing their own information:

The A.P. bases its determinations on the work of more than 4,000 freelance local reporters who collect vote counts from clerks in every county of the 50 states. Those local reporters phone the results to The A.P.’s vote entry centers, which are virtual this year because of the pandemic. More than 800 vote entry clerks assess the data, checking with the reporters about any anomalies, before entering it into the A.P. system.

A race caller in each state examines the counts with an analyst at the A.P.’s politics team in Washington to determine when a winner can be declared. Two editors sign off on every call, Ms. Buzbee said. And when the time comes to name the winner of the presidential race, The A.P.’s Washington bureau chief, Julie Pace, has to sign off.

Based on that, I think it's safe to say that the AP acts as a black box making it hard to say why they make a specific call precisely. The reason the AP is used by many news outlets is because of its long trackrecord in calling races correctly. As the New York Times article continues:

“The A.P. has a track record going back over a century of thorough, careful vote counting and cautious practices when it comes to calling races,” said Arnie Seipel, NPR’s supervising political editor. “They also have a decision desk with vast resources to do this kind of data collection and analysis. So by relying on The A.P., we are able to invest more of our resources into original reporting, instead of trying to replicate what they do.”

As for the AP making a call for a candidate who is behind in the current count, that would indicate they are basing their call on other data. Indeed, some calls are made as soon as the polls close, the AP writes the following about that:

Not all races are closely contested. In some states, a party or candidate’s past history of consistent and convincing wins – by a wide margin – make a race eligible to be declared as soon as polls close. In these states, we use results from AP VoteCast to confirm a candidate has won.

To be sure, AP will not call the winner of a race before all the polls close in a jurisdiction. And we remain committed to using results from AP VoteCast with great care and caution, applying the same standard of absolute assurance to a race call made at poll close as we do all others.

Specifically regarding Virginia in your question, I think it wasn't really in play (based on polls cited by fivethirtyeight). As such, the AP might have called it as soon as the polls closed without taking into account current results at all. In that case, the current count doesn't really matter because it mostly represents the order in which ballots are counted (often favoring smaller counties early on). Of course, the order in which results are reported doesn't influence the end result in which all ballots should be counted.

The New York Times has published an official statement from the AP saying that Virginia falls into the second group.

The AP explain their reasons for calling Virginia (and other states) on their page EXPLAINING RACE CALLS.

Essentially in early stages Trump was shown leading the count as Republican counties reported first but results matched their modelling.

WHY AP CALLED VIRGINIA FOR BIDEN:

The AP declared Democratic nominee Joe Biden the winner of Virginia at 7:31 p.m. EST, after results from early returns and an AP survey of the electorate showed the former vice president had beaten President Donald Trump in the state.

With about 53% of the vote counted statewide at 11 p.m., completed counts in a representative selection of precincts in communities across Virginia showed Biden comfortably ahead of Trump.

Those results matched data from AP VoteCast and an analysis of early voting statistics. The survey found Biden with a substantial lead in the state. VoteCast, the AP’s wide-ranging survey of the American electorate, captures voters’ choices and why they made them.

Trump jumped out to an early lead in Virginia because many Republican counties reported their results first. But much of the remaining ballots left to be counted were cast in population-dense Democratic areas near Washington D.C., including Fairfax and Prince William counties.

One of the aspects of this that makes it a little confusing is that the percent reporting does not refer to the number of voters but rather the precincts. I've managed to find two data sets for the number of precincts per locality and the population per locality in Virginia that help to illustrate the difference.

When we divide the population by the precincts we get average people to precinct ratios that range from 365 (Highland County) to nearly 5900 (Harrisonburg). Note: this is population, not voters. Looking at the entire set as a histogram we can see how these diverge: 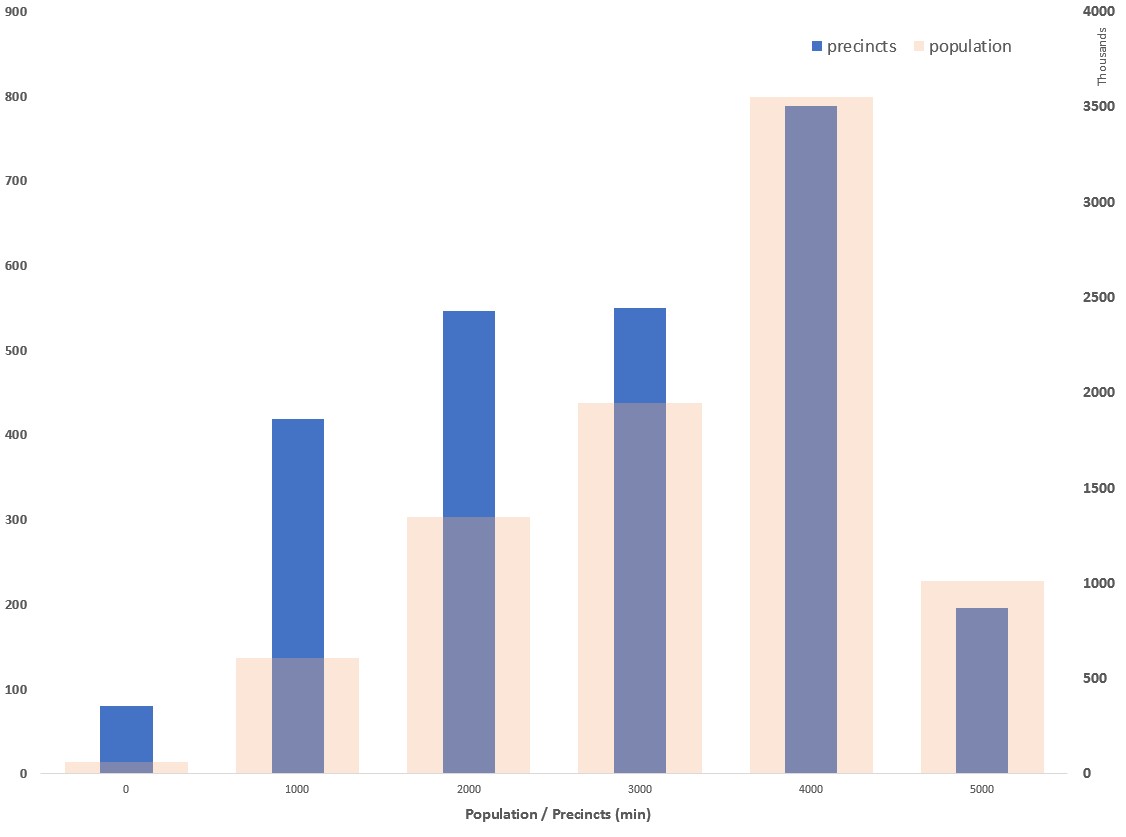 Now combine this with the following:

And you get a situation where the counts in republican dominated areas tend to be reported early. If we conflate the precinct reporting with votes counted, it possible that it can even appear to be mathematically impossible for a candidate to catch up when they can easily do so in actuality.

The above plays directly in to the question because the AP is very experienced in calling elections. I'm sure they are aware of this. They also have journalists who are very familiar with the elections bureaucracy and are able to get information about unofficial count estimates. They can then use those estimates in models that allow them to makes these calls reliably even before the votes are complete. So while it may appear to the uninformed that things are going for one candidate, they are able to see past that.

They're able to do that based on analytics, statistical models and the state of current results. I'll give a hypothetical.

There are 150 total projected votes, in a total of six districts, 25 votes each. Past voting, demographics and polling show expected trends in how the votes will split out.

The two districts remaining have traditionally been strongholds for my party at a 2 to 1 level. A wide variety of polling has shown that probable voters prefer me at a 2 to 1 level. Most importantly, results, thus far, favor me 70/30 in one, 65/35 in the other, 2 to 1 in aggregate thus far. Exit polling on voters, overall, including ones where their official vote has not been reported, show a 2 to 1 preference.

It seems like the predicted model is holding up well. If votes in thus far seem off from predicted scenarios, one would not feel certain about the remaining votes. Same for exit polling. For the remaining votes, if they fell 56 to 43 (if I underperform by 10%, you overperform by 10% from average expected patterns), I'd pick up five votes, and be the winner. If things go according to "normal", I'd pick up seven votes. If I overperform by 10%, I pick up 13 votes. (NOTE - disparities in how much the vote changes in scenarios that seem to be evenly spaced from each other are due to rounding to whole people, since I can't pick up a fraction of someone's vote).

Things are performing to norms, and in the pessimistic, expected and optimistic scenarios for remaining votes, they all show me getting enough votes to win.

The analysts tell the talking heads on the news they can call it for me, even though I'm currently trailing.

The same thing is true if someone is winning, but there's barely any votes in - if one person needed to overperform in certain ways, or is underperforming from what's needed, then there's little to no chance of them capturing those votes, even though only a small portion of the vote is in.

Not the answer you're looking for? Browse other questions tagged united-states voting presidential-election .

9
How can election winners of states be confirmed, although the remaining uncounted votes are more than the difference in votes?
9
How can Indiana already be won even though only 8% of polls have reported?
-2
US Election 2020 - California call early?

6
How accurate is the popular vote count?
2
Do any jurisdictions take steps to protect people's votes from being "outed" by the polls?
3
Is it important to know the final vote count (tally) of an election very soon after Election day?
13
Why does the Biden campaign have a $32 donation tier?
41
Trump was behind on November 5th. Why was he calling for vote counting to stop?
2
Why is Nevada so slow to count the vote?
13
What happened to the Pennsylvania Presidential vote count at 9:14 on election night?
8
What happens if the GSA refuses to recognize Biden even after the Electoral College vote?